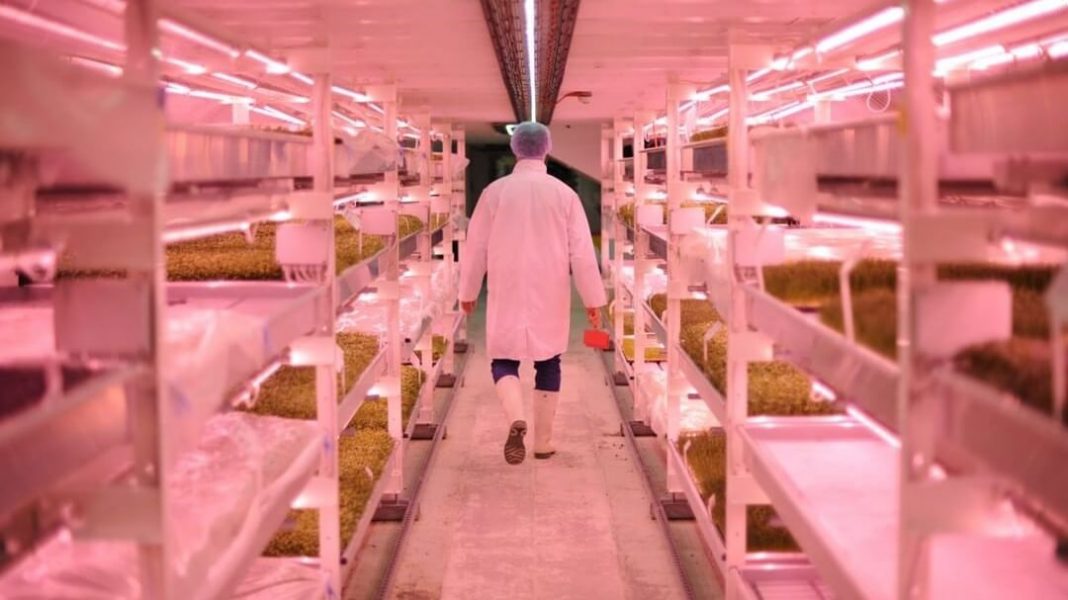 There is a thriving subterranean farm powered by renewable energy in an old World War II bunker in South London, 108 feet below the pavement.

The farm is completely temperature-controlled, allowing for Growing Underground to hand-deliver fresh microgreens such as pea shoots, red amaranth, fennel, and mustard leaves to local restaurants and retailers year-round. Seeds are sown on upcycled carpet mats and grow with the help of pink LED lights and a hydroponic system that uses 70 percent less water than traditional farms.

Being based in London allows Growing Underground to reduce the need to import from farms miles away, helping local businesses reduce their carbon footprint.

Fantastic to have the London School of Architecture @lsofarch visit the farm this week! If you too would like to catch a glimpse of the world's largest underground farm book your farm tour now! Link in bio ⬆️???? . . #growingunderground #undergroundfarm #sustainableliving #sustainablefarm #healthyfood #microherbs #eventbrite #microgreens #healthysalad #nutrition #foodwaste #foodies #christmas #growingundergroundtour #sustainability #plantpower #health #undergroundlondon

Are Hydroponic Farms the Future?

Co-founder Richard Ballard believes that the company’s methods could help sustain the future of farming. He spoke on the subject at a TEDx Talk in Clapham last June and regularly co-hosts public tours of the underground farm.

Hydroponic farms are scalable, allowing for versatile use by businesses and institutions. In Bristol, Suncraft, a vegan restaurant from the team behind The Gallimaufry, serves fresh greens from the on-site hydroponic farm.

Last May, an elementary school in New Jersey began Princeton University’s Vertical Farming Project, where students from preschool through fifth grade get hands-on experience. The organic produce is then used for meals in the school’s cafeteria.

On a larger scale, Dubai is building the world’s largest hydroponic farm that will grow the equivalent of produce from 900 acres of farmland in a $40 million 130,000-square foot facility. It’s expected that the farm will be capable of producing 5.3 tons of leafy greens daily upon its completion later this year. The produce will be served on airlines and in airports throughout the city.

Growing Underground’s greens are available at London retailers such as Whole Foods Market, Waitrose, Marks & Spencer, Ocado, and Planet Organic. Its vegetables are also served at restaurants throughout the city.