A farmer of 47 years performed an unprecedented animal rescue and swapped animal farming for vegetables. In a story reported by the BBC last year, a Devon lamb farmer said he’d had a change of heart about sending his lambs to slaughter.

That same farmer, Sivalingam Vasanthakumar, is now calling for the government to stop bailing out animal agriculture in support of Cost of a Pandemic, a new campaign launched by the nonprofit group, Animal Justice Project. The campaign draws the connection between animal agriculture’s potential to cause a new pandemic.

Vasanthakumar said in a statement that the government should support plant-based food instead. “Government support is vital and farmers need to understand the drawbacks from livestock farming,” he added. “It can be done.”

Vasanthakumar, originally from Sri Lanka, now resides in Totnes, Devon, where he’s been raising animals for decades. In Sri Lanka, Vasanthakumar raised dairy cows with his parents. But after nearly five decades, and with the support of his daughter Molly, Vasanthakumar decided to rescue the lambs.

“I just couldn’t cope any more and I had to say no,” Vasanthakumar said. “I couldn’t do it. The emotional toll had become too much.” He added, “it was taking them to the slaughterhouse and that was stressing me out a lot.”

Vasanthakumar appeared in a video produced by the American animal protection group Farm Sanctuary. In the video, he said that he initially carried on because he “just couldn’t tell anybody.” But Vasanthakumar explained that the animals could tell when they were at the slaughterhouse. And added that this upset both him and them.

Vasanthakumar chose to rehome his flock with Goodheart Animal Sanctuaries, as it meant they could go together. Goodheart said that this was the first time a farmer has brought lambs to the sanctuary.

“I’m happy there watching them,” said Vasanthakumar, while visiting the sheep. “You can’t talk about monetary value for that.”

“My message was, you know, give up livestock farming, that’s my personal decision,” continued Vasanthakumar. “But I had a lot of other farming friends, I mentioned [it] to them and they did say that they felt the same when they take the animals to [the] slaughterhouse. So every farmer feels that. But it’s their livelihood.”

It’s not the first time a farmer has had a change of heart about the business of raising animals. A growing number of farmers are shifting away from animal agriculture for both the emotional and financial tolls.

The 2018 documentary “73 Cows” tells the story of Jay Wilde, the first farmer in the UK to trade beef farming for sustainable organic vegan farming, giving up his entire herd of cattle in the process. The film won the “Best Overall Film Award” and the “Best Lifestyle Film” award out of the 29 entries at the First Ottawa International Vegan Film Festival.

It was also won a BAFTA award.

“When we set out to make ’73 Cows’ I knew that the film had potential as Jay’s story was so inspiring, but I never anticipated the reaction it’s receiving,” director Alex Lockwood told LIVEKINDLY.

“The film really seems to have struck a chord with people all around the world. When we released the film online, we thought that it would be viewed by a few hundred people within the first few days, so we were amazed when the viewing figures kept going up and up into the tens of thousands,” Lockwood said.

U.S. based vegan milk brand Elmhurst Milk used to be in the dairy business. It was one of the longest-running and largest dairy plants in New York City. But as the market shifted, sales began to decline, and the brand made the decision to shutter its operations and pivot into the booming plant-based milk market, where it’s now considered one of the category leaders.

The 82-year-old grew up in the dairy business started by his father nearly a century ago. But he says times are changing and other dairy farmers need to keep pace.

“Whether through capital investment or some other means, businesses will have to evolve their offerings to keep up with consumer demands and trends,” Schwartz said. “If you can get this from nuts or grains,” he added, “I don’t see how cows can have a monopoly on the term.” 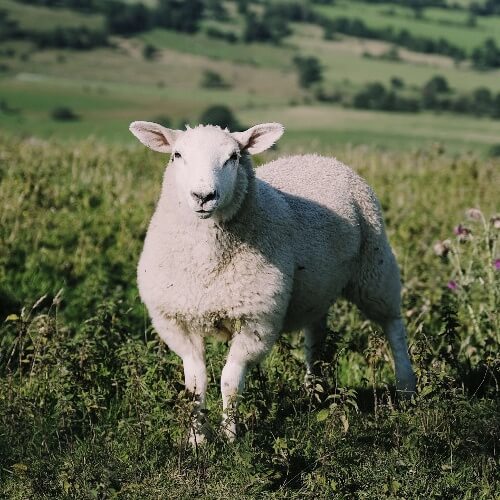 Goodheart is one of the few rescue charities able to rescue farm animals.

The non-profit Goodheart Animal Sanctuaries is a relatively new animal rescue charity, but it is already making a significant impact. In addition to securing the charity’s HQ, Nickless Farm in Worcestershire, the team has helped two other struggling animal sanctuaries.

Farm Animal Sanctuary and Wiccaweys Rescued Border Collies and Working Sheepdogs were both in need of new premises. Goodheart Animal Sanctuaries aided both and continued to work with them whilst they finish setting up Nickless Farm.

According to sanctuary manager David Bourne, Goodheart is also one of the few rescue charities with the facilities to rescue farm animals. According to Farm Sanctuary, more than 500 million sheep are slaughtered globally every year.

Vasanthakumar now runs the all-vegan Kumar’s Dosa Bar in Devon, England. He told LIVEKINDLY rescuing the lambs was “the best decision” he ever made. He also said that he would like to go back to Sri Lanka and support small farmers making their farming methods more sustainable.