Updated May 23, 2019. After being one of the first chains to add the Impossible Burger to its menu, Fatburger now has vegan cheese.

Andy Wiederhorn, CEO of Fatburger parent company FAT Brands, is positive about the launch. He said,  “We pride ourselves in being early adopters of innovative new menu items, and I anticipate the Daiya slice will do extremely well, just like our Impossible Burger.”

Fatburger chains already had one veggie burger option; where customers have the choices of vegan Boca Burger patties or a Gardenburger. Each “Fatburger” comes in the sizes of either small, medium, large, XXL, XXXL and are served with traditional toppings.

To make their veggie-friendly burgers vegan, customers need simply to ask to remove the mayonnaise and order without the bun. By doing so, the burger comes on what is known as a “Fry Boat” (the fillings are served on bed of fries), or as what the franchise calls a “Skinnyburger” (two patties, in this case, Impossible Burger patties will replace the buns). 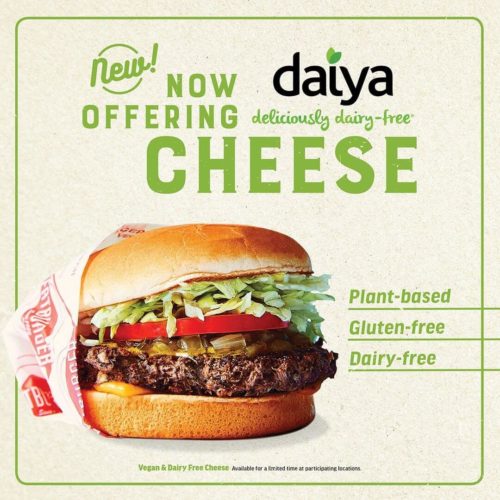 Fatburger is a global burger franchise, however, it was their Californian locations where their Impossible vegan burger option was originally debuted. Five locations trialed the burger initially, however it was so successful that the chain soon rolled it out across all U.S. locations.

Impossible Foods is currently served at a number of mainstream restaurant chains, including White Castle, QDOBA Mexican Eats, and soon, all 7,000 Burger King locations. This popularity has further supported the company’s mission to completely eliminate animals from food production before 2035.

The Impossible Burger’s popularity has also benefited the brands that have decided to stock it.

“Strong Fatburger results continue to be driven by momentum in delivery, as well as by increased traction of the plant-based Impossible Burger.”

More recently, Burger King has seen incredible feedback after including the Impossible Whopper on its menu in St Louis. Since the announcement on April Fool’s Day, the chain has now announced it will be available in Europe, and perhaps even the UK.