Appetizers like guac and hummus are welcome at any party, but a great cheeseboard — That unites people. Cheese is so loved, that when the subject of going vegan comes up, people often say they could never give up cheese. But, you don’t need cow’s milk to make great-tasting cheese. Artisan crafters are now making great-tasting cheese from nuts and seeds. And that means you can build a mean vegan cheeseboard for Christmas that’s so rich and delicious your guests won’t even notice that it’s not dairy.

What Is Vegan Cheese?

Vegan cheese is made without milk from an animal. It can be made from a variety of ingredients, such as coconut oil, cashews, almonds, and sunflower seeds. Some companies use probiotic cultures to ferment their cheese, proving that traditional cheese-making techniques don’t need dairy to work. Vegan cheese comes just like dairy cheese — slices, spreads, and shreds. And fine artisan cheeses such as sharp cheddar, camembert, gorgonzola, and brie abound, too. 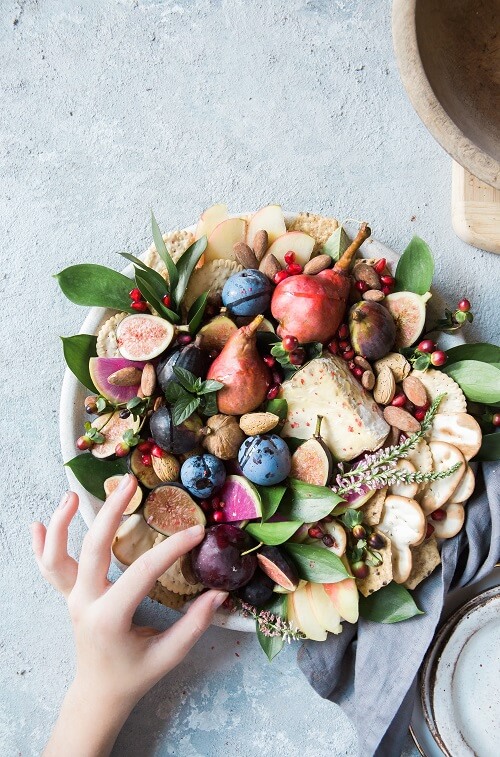 Get creative with your vegan cheeseboard.

What to Put on a Vegan Cheeseboard

What should go on a vegan cheeseboard? First, you’ll want to make sure there’s enough cheese to go around. If there’s a lot of food at the event, four ounces of cheese per person should suffice. Store your vegan cheese in the refrigerator prior to the event and take them out about an hour before you expect company — cheese is best served at room temperature. Be sure that you have a cheese knife for each variety and that your board is big enough.

There are no hard rules as to what goes on your cheeseboard, just a few loose guidelines:

Pairing your vegan cheeseboard with wine or a sparkling beverage elevates the experience. Sommeliers have nailed down which wines go with which traditional cheeses, and the rules aren’t so different when the cheese is dairy-free.

“I feel with food and wine pairing in general that one should follow our own palates,” Frances Gonzalez, founder of Vegan Wines, tells LIVEKINDLY in an email. But, there are a few guidelines you can follow if you want to experience complementary flavors, particularly if you’ve chosen vegan cheeses that are counterparts for traditional cheese.

For vegan cheddar, Gonzales suggests choosing “intense wines to bring out their flavors like a Cabernet Sauvignon or a Gamay.” For soft vegan cheeses, like brie, “go with a more tannic wine like a Chardonnay or fruity red wines,” like a California Pinot Noir. Vegan goat cheese does well with acidic wines, so it’s best with mineral-driven white wines, “like a Sauvignon Blanc or pair it with a light tangy red wine (tangy Pinot Noir) if you are a red lover.”

For an alcohol-free option, choose a sparkling beverage like TÖST, a dry blend of white tea, cranberry, and ginger or opt for a sparkling cider.

The Best Vegan Cheeses for Cheeseboards

Ready to get started? Here are our top picks for vegan cheeseboard brands. 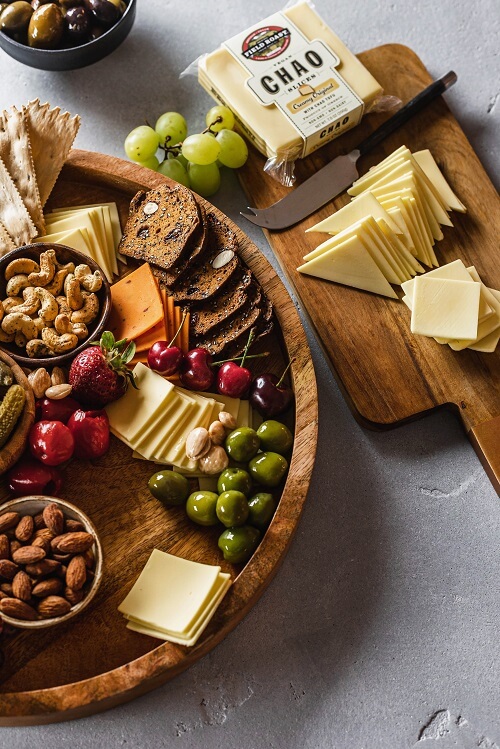 Field Roast Chao Cheese is at home on a vegan cheeseboard.

The coconut-based cheese has a creamy, complex, umami flavor, courtesy of fermented tofu. It also has a taste and texture just like traditional cheese, so it tastes great on its own or paired with cheeseboard accompaniments like crackers, table grapes, nuts, olives, and vegan deli slices.

Field Roast offers three flavors of Chao Cheese to choose from: Creamy Original, Tomato Cayenne, and Garden Herb. Creamy Original is described as having a bold flavor and bite. Tomato Cayenne features tomato complemented by notes of cayenne and bell peppers, which gives it a sharp and spicy flavor. Garden Herb is speckled with oregano and cracked black pepper, making for a sweet-and-savory experience. 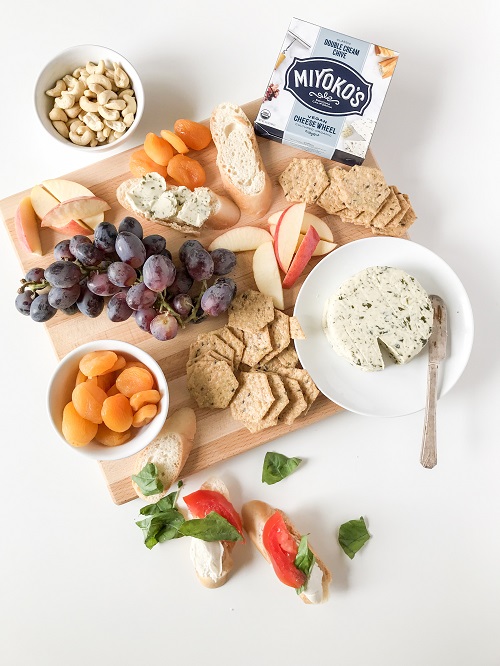 Miyoko’s Creamery specializes in vegan cheese made from cashews.

California-based brand Miyoko’s Creamery is revolutionizing dairy with plants. Founder, cookbook author, and award-winning vegan chef Miyoko Schinner fell in love with artisan French cheese in the 1980s. But, she soon found herself conflicted by her love for cheese and her compassion for animals. So, she created her own artisan cheeses inspired by French fine dining. Miyoko’s Creamery makes its vegan Cheese Wheels from organic cashew cream fermented with live cultures, so they deliver that je ne sais quoi dairy cheese flavor. Schinner believes that thanks to cashews, we can let cows just be cows.

Miyoko’s Creamery has a wide variety of dairy-free cheese to complement any cheeseboard. The cheese wheels have a semi-soft texture for spreading on crackers and crusty slices of artisan bread, with flavors ranging from Classic Chive to Sundried Tomato Garlic. The cheese wheels also come in semi-firm flavors, such as Rustic Alpine, which pairs well with sliced pear, apples, and other fruit. Smoked English Farmhouse is the ideal companion for crackers. The brand also makes three flavors of Vegan Cream Cheese — Plainly Classic, Un-Lox Your Dreams, and Sensational Scallion — that have a tangy flavor and spreadable texture. Not only do they satisfy the craving for a bagel with cream cheese, but they’re also great for vegan cheeseboards. 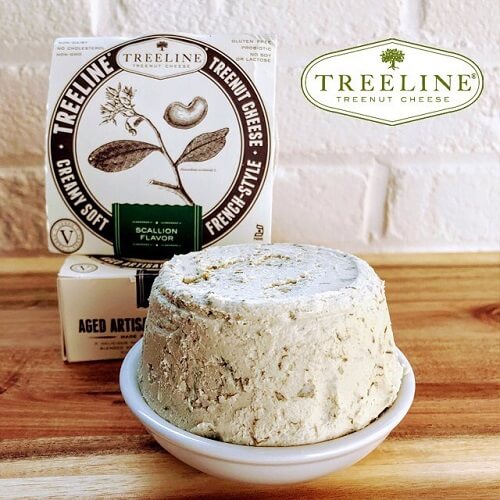 Made from Brazilian cashews, Treeline vegan cheese is fermented with a probiotic culture called Lactobacillus Acidophilus (which is dairy-free despite the “lacto” name). The cultures give Treeline’s cheeses a tangy, authentic flavor that pairs fantastically with classic cheeseboard fare. There are four flavors of spreadable soft cheeses, two aged cheeses, and New York Style Cashew Cream Cheese. Treeline vegan cheese is available in more than 3,000 stores nationwide, including Kroger, Whole Foods Market, Wegmans, and Fred Meyer. 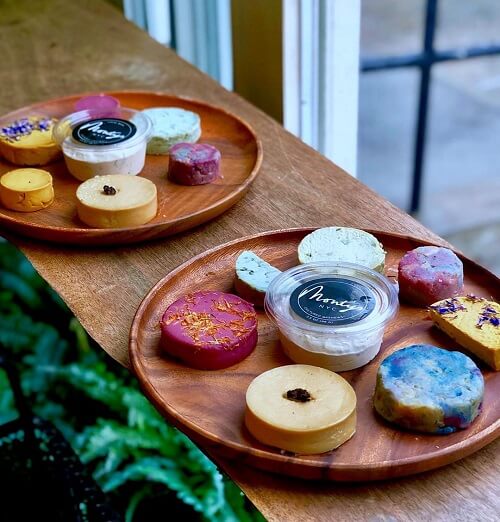 New York City-based brand Montys makes its cultured cheese wheels in from organic, Equal Exchange cashews. The brand’s cashews are raw and sprouted to increase the bioavailability of nutrients prior to being handmade in small batches by the founder, Lauren Montgomery aka Monty. Flavors include Cultured Cashew Everything (But the Bagel), speckled with everything bagel seasoning and the eye-catching Mac Crac Cultured Cashew Wheel, which uses superfoods to create vibrant colors. It’s available online through Mylk Guys. 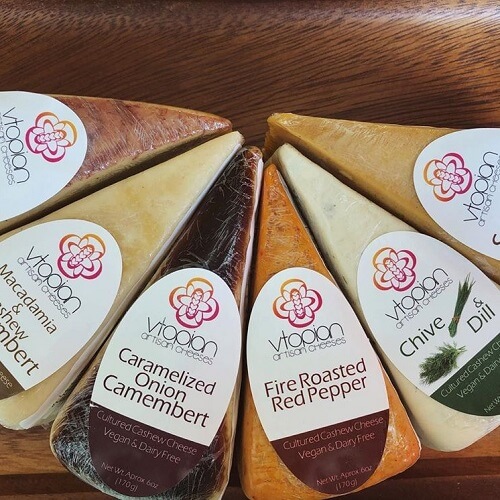 Handcrafted in Portland, Oregon, Vtopian Artisan Cheeses used organic, ethically-sourced cashews to make cultured vegan cheese. With a wide range of flavors, from Fire Roasted Red Pepper to Aged White Cheddar, it has cheese for every occasion. It’s available at specialty vegan shops throughout the country as well as online through Mylk Guys and Vegan Essentials. 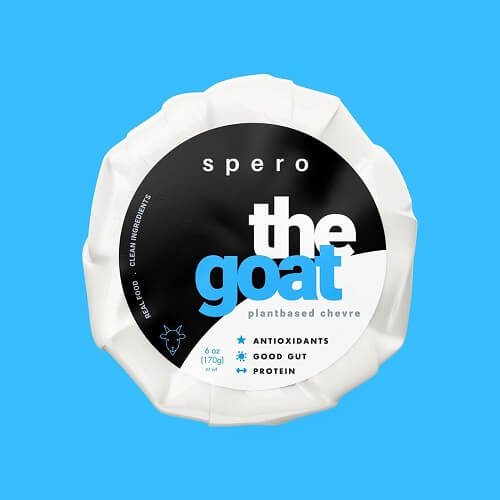 The Goat is a vegan version of chevre.

Spero Foods makes “cheese made for cheese lovers.” These cultured nut-free vegan cheeses are made from sunflower seeds, so they’re perfect for those with nut and dairy allergies. Plus, they’re paleo and keto-friendly. Spero Foods makes flavors like The Goat, a plant-based version of chevre, and the Cinn, a uniquely sweet-and-spicy cinnamon-infused cheese. It’s available through the website and specialty food stores throughout the U.S. 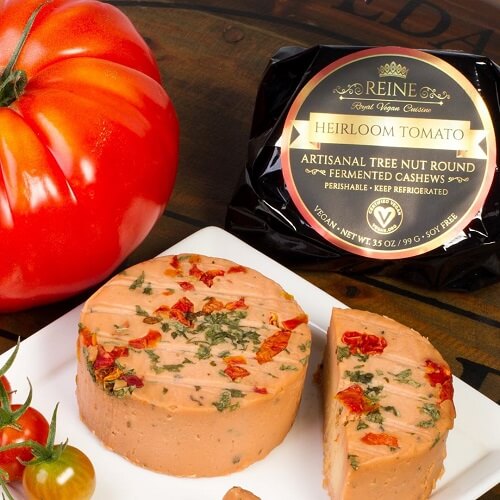 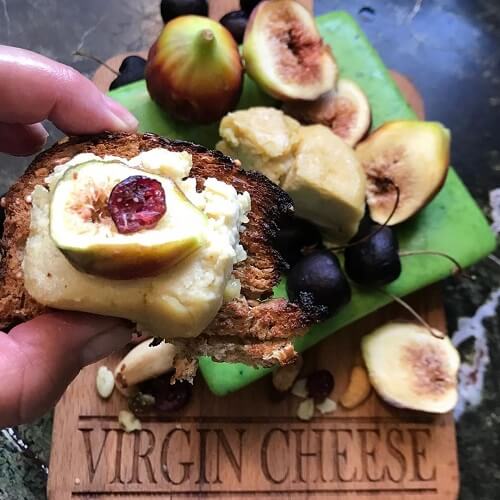 Amp up your cheeseboard with Virgin Cheese.

Virgin Cheese makes traditionally cultured, artisan vegan cheeses from organic cashew milk. According to the brand, “We specialize in cheeses worthy of fine wine and are purveyors of the ultimate picnic and gift baskets.” Varieties include Bleu, Port Wine Cheddar, Brie, and Feta. It’s available in select specialty retailers and online through Vegan Essentials. 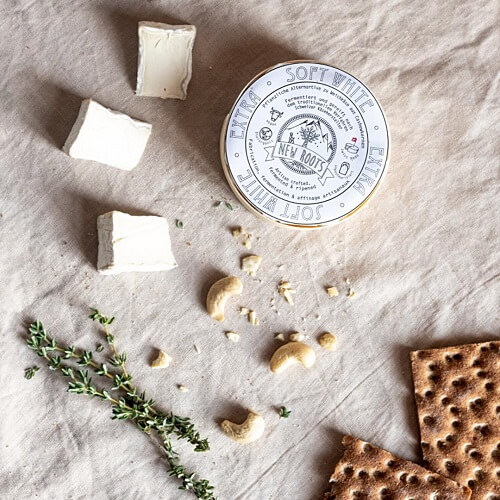 Switzerland-born vegan cheese brand New Roots is creating new traditions with cashews instead of dairy. It uses ethically-sourced, organic cashews and eco-friendly packaging. They specialize in making soft cheeses and flavors include Herbs de Provence, Free the Goat, and Soft White, which has a rind like the real thing.