Fire cooking has received a lot of attention recently, all manner of restaurants have opted for cooking over flames as opposed to conventional stoves and ovens, and with BBQ season in full swing here in England, you’d be hard pressed to walk anywhere without smelling smoky charcoals in the air.

Personally, I prefer to cook over wood fire rather than charcoal, the pleasure of finding your firewood, starting a small fire, watching it grow to produce a healthy bed of embers, and then using that fire to create a feast of humble ingredients transformed into rich, deep flavours is an unrivalled joy.

It’s definitely not fast food, but having the time and patience to cook this way is undoubtedly worth it. Besides, you wouldn’t find a better way to spend a day than relaxing fireside, in the great outdoors, creating delicious plates of food.

Although we typically think of cooking over fire to be a quick way to char and caramelise ingredients, I think there’s a lot to be said for using the fire in a slightly different way. Try slow cooking, to allow for a more flavourful result by letting the ingredients to steam in their own juices. 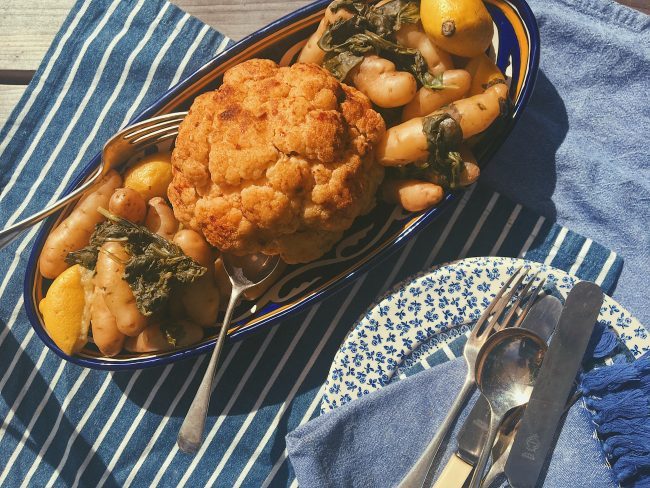 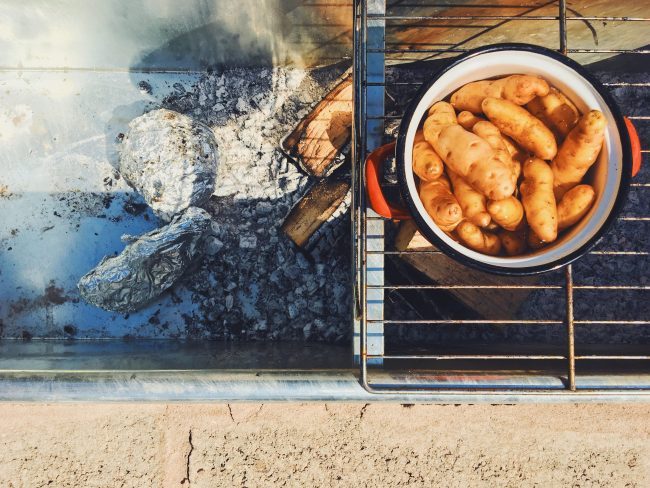 METHOD
– Remove the leaves from the cauliflower, but keep the stem attached to the florets.
-Peel garlic cloves and use your thumb to push them up into the spaces between the florets, you can be pretty forceful, the further you can get them up into the cauliflower the better.
– Place the cauliflower on the aluminium foil, and drizzle with olive oil, making sure to get it over the whole thing, then sprinkle over paprika and chilli flakes.
– Now wrap the cauliflower nice and tightly in the foil; as we wanna cook it for a couple of hours, be sure to make sure there’s two layers of foil to make sure it doesn’t cook too quickly and burn.
– Place the cauliflower near to the fire, but not directly onto any flames or embers, about a foot away is ideal. If you’re not sure that it will be hot enough, place your hand in front of the cauliflower and if it’s too hot for you to keep it there, then it should be an ideal temperature to allow the cauliflower to cook slowly. As it’s not in direct heat there’s not need to turn it constantly, around once every 20 minutes should be plenty.
– Be sure to keep the fire stoked up, not least because maintaining a fire is one of the greatest pleasures of fire cooking, but we also wanna keep a consistent temperature going; there should always be some flame action going on, with a good base of embers beneath it.
– Continue the infrequent turning of the cauliflower going for about an hour and a half, a good way to ensure that it isn’t burning is to keep an eye on the foil; if it’s starting to blacken then move it further from the fire. 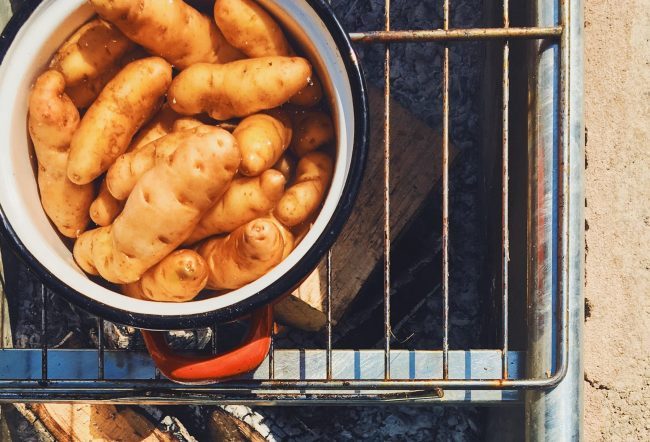 – At this point it’s time to make a start on the potatoes; place them into a pan full of water, and either place the pan onto a bed of embers, or onto a grill positioned above the flames of the fire, either way should have the water boiling within five minutes.
– Let the spuds boil for about ten minutes, and use a knife to check they’re cooked through before removing from the fire and draining.
– Place the cooked potatoes onto a sheet of foil, add the spinach, then cut the lemons in half, squeeze the juice out over the potatoes and spinach, then add the lemons themselves into the mix too.
– Rather than wrap this up tightly like we did with the cauliflower, we wanna keep a space inside this foil package to allow the contents to steam, so essentially you’re looking to make a tinfoil pillow.
– As the spuds are already cooked, we’re just looking to steam the spinach and let the lemons cook down a little, so either place the potato-filled tinfoil pillow on a small bed of embers, or a grill over a cooler part of the fire and allow it to cook for about ten to fifteen minutes, turning occasionally to allow the lemon juice to really work it’s magic on the spuds and spinach.
– Once the potatoes have had time to steam, both them and the cauliflower should be ready to de-foil.
– Before unwrapping the cauliflower I stick my knife into the stem, if there’s no resistance it’s perfectly cooked. 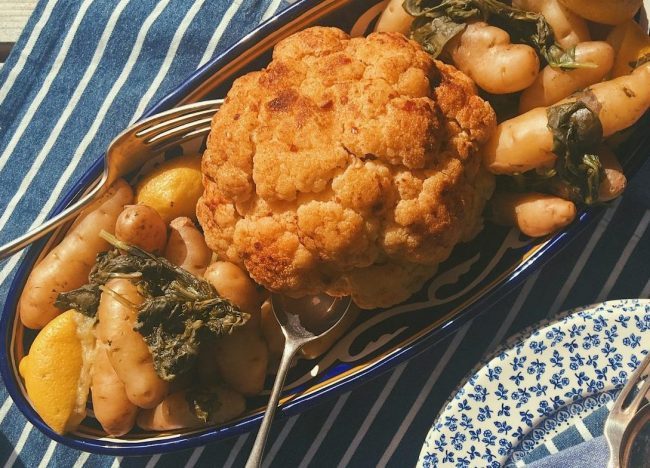 Unwrapping it will feel nerve wracking, by this point you’ve worked for potentially three hours to cook this, but if all has gone to plan, the sight of a perfectly cooked cauliflower will undoubtedly put a big, smug smile on your face.

Plate the cauliflower then cut open your potato package and once you’ve got the spuds and spinach ready, be sure to squeeze the lemons over them too, the flavour they get from steaming is heavenly.

Best eaten fireside, with a cold drink, I guarantee that smug smile won’t be going anywhere any time soon.