Firezza has become the latest pizza chain in the UK to add a new vegan option to their menu and it looks mouth-wateringly good! The chain which began in Battersea and now has 20 locations across the country, prides itself on creating authentic Neapolitan pizza that is served by the metre.

Now, vegans can get in on the action with Firezza’s new cruelty- free creation. The pizza consists of vegan cheese, red peppers, wild rocket and the star of the show, vegan chorizo.

Firezza joins major UK chains Pizza Hut and Zizzi in its decision to offer vegan pizza to the masses, showing just how much veganism has taken off this January. Other establishments such as All Bar one, Starbucks and Wagamama are also offering new vegan choices on their menus this month. 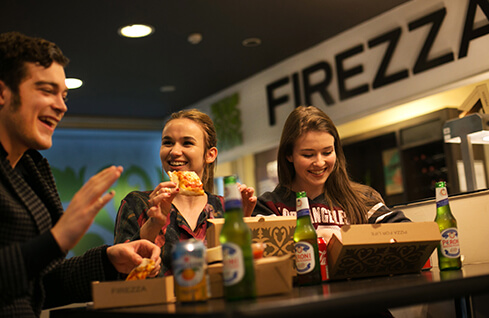 The restaurant introduced the pizza in partnership with Veganuary, writing on their facebook page, ‘vegans rejoice! We’re super excited to be launching our new Vegano Chorizo pizza with Veganuary today.’

The chain already offers vegan cheese at no extra charge on their pizzas (ahem, Pizza Hut) and you can order for delivery or dine in at their branches in various locations across Exeter, Milton Keynes, Reading and London.

Firezza told Veganuary, ‘it’s hopefully the first of what will be many vegan pizzas in the future.’