Vegan food company Follow Your Heart has long been a favorite name for plant-based foodies. This summer, fans of the brand will have another round of products to fall in love with: a new vegan yogurt line.

The line will include blueberry, key lime, peach, strawberry rhubarb, cherry, vanilla bean, and raspberry, among others. All products are made from real fruit, feature probiotic cultures, and are vegan. They are also free from soy and gluten.

For some time, scientists have been working to develop a vegan yogurt that could rival its dairy counterpart. While a growing body of research indicates that going without dairy lowers your risk of disease, researchers say that if a product lacks good taste, it won’t sell.

Regarding yogurt alternatives, the Global Marketing Manager of Fresh Dairy said: “[a] product can be as healthy as you could possibly imagine; but if it doesn’t taste good, it will never take off. The good taste and the opportunity to choose between appealing flavors are what will keep consumers coming back.” 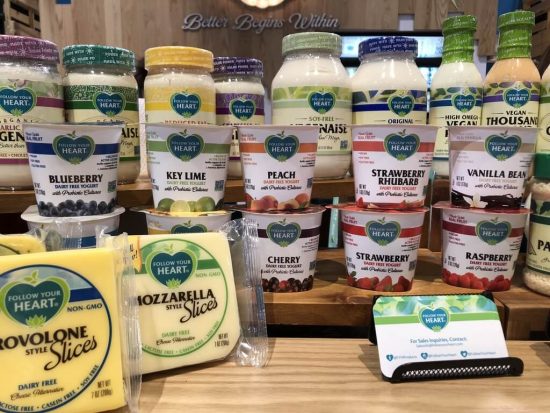 If there’s one brand that can pull it off, it’s Follow Your Heart, if their previous success is anything to go by.

The California-based company are behind the “world-famous” Vegenaise, as well as a variety of vegan cheese and salad dressings. Late last year, Follow Your Heart finally made it “across the pond”, when its products became available in one of the UK’s largest supermarkets.

Additionally, the brand managed to secure a place on Dominos’ menus at the start of this year when Dominos launched their very first vegan pizzas in Australia. A spokesperson for Dominos noted an “extremely positive” reaction from customers, saying the public were “delighted” with the pizzas.

Follow Your Heart has previously launched the VeganEgg, an entirely plant-based egg replacer. Most recently, the company revealed two new products which will be released shortly. The Liquid VeganEgg, a pourable, liquid version of the egg replacer, and Rocket Cakes, a vegan pancake mix, will hit store shelves in June.