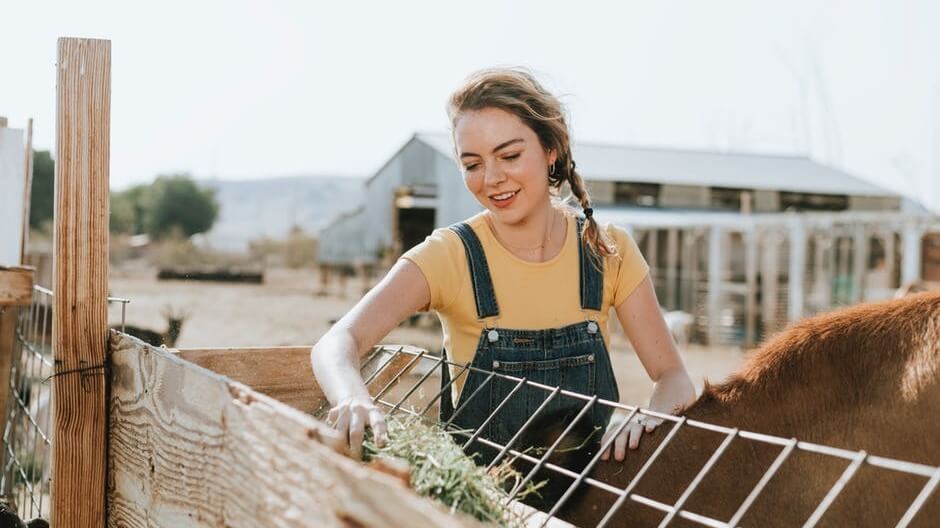 As more and more consumers opt to eat plant-based foods for their health, the environment, and for the animals, meat and dairy industries are suffering. Some farmers are accepting that the future is beginning to look vegan, and they’re changing their lives and their farms to match.

In a section on its website named “Sowing Change,” animal advocacy nonprofit Free From Harm documents the stories of those who have decided to live and work cruelty-free. According to the site, these farmers now recognize that “humane” farming can only ever involve the farming of crops and not the exploitation of animals in any form.

According to the site, the farmer’s profiles “are hope-filled proof that even those who stand to lose most by renouncing animal exploitation are capable of a massive change of heart.”

For some, like Marloes Boere who grew up on a farm in the Netherlands, it was watching the heartbreaking separation of mother cows and calves in the dairy industry that encouraged the shift to veganism.

This Labor Day, we contemplate the common question, What would happen to all the animal farmers and slaughterhouse workers if animal agriculture ended? Animal agriculture will never simply come to a screeching halt overnight, leaving millions of workers jobless. A far more likely scenario is a decline based on a decrease in consumer demand over time. Many animal farmers who have a change of heart transition their farms to grow crops for human consumption, and slaughterhouse workers who “process” animals into food can also process plants into food. In fact, plant-based meat and dairy alternatives are one of the fastest growing sectors in the food industry. Consider also that modern animal farming methods have *drastically reduced* jobs in the farming sector. The intensive confinement, or factory farming, model that dominates Western, and, increasingly, global animal agriculture, is based on the use of feeding and housing technologies that produce the greatest amount of animals with the least amount of cost and human labor. This means that, to give just one example, a typical “broiler” chicken shed with as many as ten thousand birds crammed inside will commonly be overseen by a single worker. As people eat less meat, dairy and eggs, and more plant-based alternatives, new jobs and industries will be created. As demand for animal products decreases, we should also see an increase in programs designed to help animal farmers transition to plant-based farming. This is what our NewFarming.org campaign is all about: sharing the stories and courageous transitions of farmers who had a change of heart. #vegan #vegansofig #meat #dairy #eggs #milk #cheese #beef #pork #dairyfarming #dairyfarmer #milktruth #dairytruth #milkhurts #milklife #dairygood #undeniablydairy #regenerativefarming is #veganicfarming #regenerativeagriculture #veganic #friendsnotfood #eatplants #sustainability #sustainablefood #sanctuary #farmsanctuary #farmsanctuarylife

Boere writes in her profile, “I am horrified that we live in a world that teaches children it is acceptable to invade and exploit motherhood in such a violent way. No one should support this. Mother’s milk is baby food and cow’s milk is for baby cows.”

For others, like former beef farmer Renée King-Sonnen, it was watching friendships form and be torn apart when cows are divided and then loaded up for auction and slaughter. King-Sonnen now runs a farm sanctuary – on the same land she used to farm cows for meat – where she rescues cows, pigs, chickens, and other farm animals in need.

As well as documenting the ethical epiphanies of former meat and dairy farmers, Free From Harm aims to educate consumers on the health and environmental benefits of going vegan. It also highlights the positive benefits a global reduction in animal agriculture could have for the human race; if there were less factory-farmed animals to feed, more crops would be available to feed the growing population.

The Sowing Change section of the Free From Harm website is consistently growing, with profiles regularly added from farmers all over the world, who – like former dairy farmer Cheri Ezell – have stopped exploiting animals for monetary gain.