Updated October 15, 2019. Eight years ago, Eric O’Grey’s doctor sent him home with an ultimatum: Make a change or buy a cemetery plot—because he’d likely need it within the next five years. It was the wakeup call Eric needed. At his heaviest, he weighed more than 300 pounds and struggled to tie his shoes or walk more than a few steps without losing his breath. He took 15 drugs each day to control his sky-high cholesterol and blood pressure and insulin injections for his type 2 diabetes. He remembers feeling like “the walking dead.”

Eric’s story might sound familiar. About half of all adults in the United States live with at least one chronic, lifestyle-related disease. More than 115 million of us suffer from prediabetes or full-blown diabetes, which all too often leads to heart problems, nerve damage, blindness, stroke, or kidney failure. Diabetes is currently the seventh leading cause of death in the United States.

But Eric wasn’t ready to accept this fate. Instead, he decided to make a change. Having heard about Bill Clinton’s health transformation after adopting a plant-based diet, he decided to give it a try himself. Working with his doctor, he created a plan: Cut out animal products, highly processed, and high-fat foods, but eat as many fruits, vegetables, grains, and beans as he wanted. There was no carb counting or calorie watching. 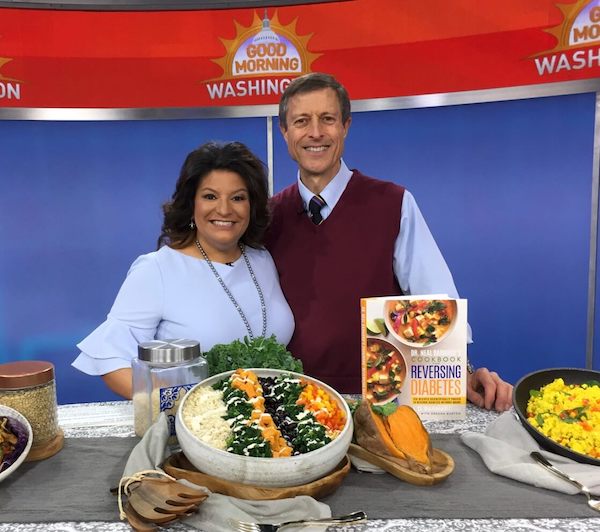 After years of yo-yo dieting, Eric finally found something that worked. Eric, who once found the idea of giving up meat impossible, found that his new diet wasn’t limiting, but abundant: He enjoyed foods like spicy rice and bean dishes, sweet potato lasagna, and tofu paella. His energy was up, and the pounds began to fall off almost instantly.

Within four months, he was off all of his medications, including the daily insulin injections. His blood sugar had stabilized, and his A1C normalized. His diabetes, in effect, was gone. Within 10 months, he lost 150 pounds, and now he runs more than 20 marathons and half-marathons per year.

As a doctor, I’ve observed these same powerful results time and time again when patients with type 2 diabetes adopt this way of eating. That’s why my research team and I decided to put a plant-based diet to the test in a randomized clinical trial back in 2003. We assigned participants to either a plant-based diet or to the diet promoted at the time by the American Diabetes Association, which called for limiting carbohydrates and counting calories. The results were striking. A plant-based diet controlled blood sugar three times more effectively than the traditional diabetes diet.

So how does it work? Studies show that eating a diet high in fatty foods—like bacon, sausage, or cheese—can cause small fat particles to build up inside our muscle cells. These fat particles interfere with insulin’s ability to do its job and move glucose—or sugar—out from our bloodstream and into our cells. This is a condition called insulin resistance. Instead of powering our cells, the glucose remains in our bloodstream, eventually leading to type 2 diabetes. A plant-based diet, on the other hand, is naturally low in fat, which helps reduce the fat in our cells, restoring insulin function.

Unlike medications, a plant-based diet doesn’t just mask symptoms of diabetes, but it powerfully addresses the problems that led to the disease in the first place. Plus, all the “side effects” of a diet change are good: Weight falls, cholesterol drops, blood pressure improves, and energy goes up.

Other major studies have confirmed these results. The Adventist Health Study-2, a large-scale study of 96,000 people, found that those eating a plant-based diet had roughly half the risk for developing diabetes as those eating animal products, even when adjusting for differences in body weight, physical activity, and other factors.

It’s one of the most profound shifts I’ve witnessed during my medical career. As a student, I was taught that diabetes was progressive and incurable and that once you have it, it never goes away. I watched patients, just like Eric, walk through the door in the early stages of the disease. Over time, I saw them experience serious complications, like vision loss, kidney failure, and debilitating neuropathic pain, all the while receiving more and more medication. Never once did I hear a doctor say that a patient was cured. Never once did I see a patient hope that it was possible. For the millions of Americans living with diabetes today, that’s no longer the case. With a plant-based diet, the solution for the diabetes epidemic is now at hand.

Neal Barnard, M.D., is president of the Physicians Committee and an adjunct professor of medicine at the George Washington University School of Medicine and Health Sciences. Founded in 1985, the Physicians Committee for Responsible Medicine (Physicians Committee) is a nonprofit organization with more than 12,000 physician members that promotes preventive medicine, conducts clinical research, and encourages higher standards for ethics and effectiveness in research. View Dr. Barnard’s published studies at NealBarnard.org.