Can’t bear to tear yourself away from your gaming marathon long enough to enjoy a family dinner this Christmas? GAME has you sorted. The UK-based video game retailer has launched a vegan Christmas dinner in a can.

Its 12-layer canned vegan Christmas dinner has everything you need — if what you need is chocolate cake, red cabbage, custard, vegan pigs in blankets, and beet wellington all crushed together in one appetizing tin.

GAME first started selling its canned Christmas Tinners back in 2013. The original version includes scrambled eggs, bacon, mince pies, turkey, and Brussel sprouts. As well as the vegan option, it has also expanded its unique range to include a veggie dinner. The latter includes a nut roast, Toblerone, cauliflower cheese, and a yule log.

“The original Christmas Tinner has been so popular with gamers over the last several years. This year we’ve been inundated with requests for a vegan or vegetarian alternative,” said Emma Butler — digital marketing specialist at GAME — in a statement.

“There are now 3.5 million vegans in the UK,” she added. “We have had to respond to the shift in consumer behavior habits and demand and make sure our products are appealing to all.” 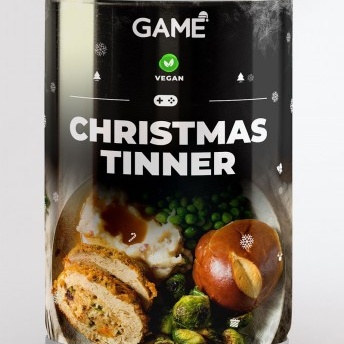 GAME’s vegan Christmas Tinner includes a variety of sweet and savory foods crammed together in a can.

While some may assume that no one would actually eat GAME’s Christmas Tinner, they would be wrong. The chain found gamers were consistently searching the website for the food item.

So, it teamed up with creative digital PR agency Rise at Seven to launch the new cans of pressed together sweet and savory vegan and veggie Christmas food.

“Game contacted us regarding this project after receiving a number of requests for new vegan and vegetarian options,” said Carrie Rose, Rise at Seven’s creative director. “They found that every year, the number of searches on the website for the product increased. More and more gamers [were] searching for alternative ingredients of the tinner.”

She added, “they needed to create a product that appealed to their whole audience whilst remaining tasty too.”