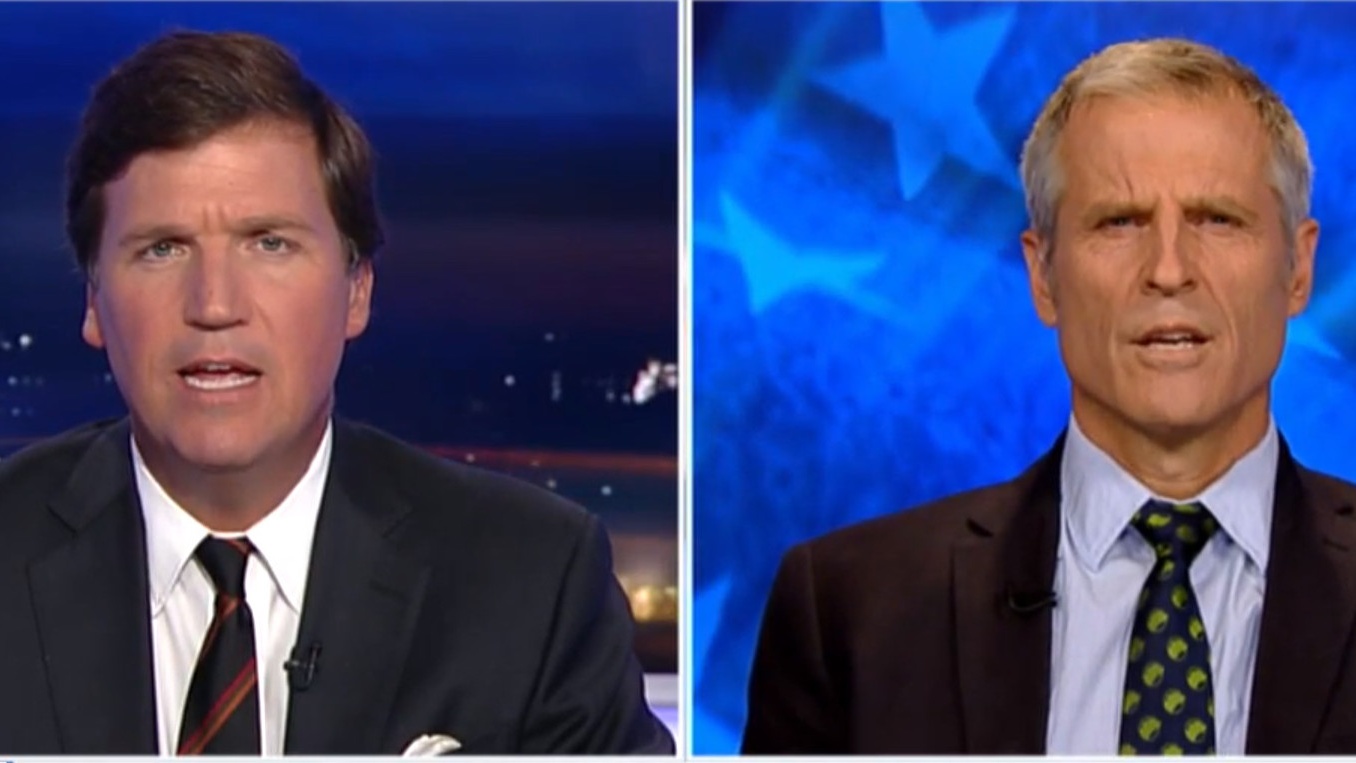 Gene Baur, founder of Farm Sanctuary, the oldest haven for rescued farm animals in the nation, made an appearance on Fox News right-wing political talk show “Tucker Carlson Tonight” to discuss veganism and the ethical dilemma of factory farming.

Carlson opened the segment with a segue, reminding viewers that his show had covered the issue of the horse meat trade before introducing Baur. “He believes eating any meat is wrong,” Carlson said, emphasizing “any.” Carlson began the interview by presenting Baur with the statement: “You’ve got your ideas about what we ought to be eating – I do too, I love burrata – but I’m not trying to force anybody else to eat burrata. It seems to be taking a rather large step to assume you have the right to tell people what to eat. Why are you doing that?”

“Well, I’m actually not telling other people what they ‘must’ or ‘must not’ eat,” Baur clarified. “I just want people to think more about their food choices and recognize the consequences of those and also recognize that not eating animals is actually an option we have.”

“We grow up believing we need meat for protein, but in fact, we can live well without it. So it’s a choice we each need to make, but we should make informed choices,” Baur continued.

“I don’t think it’s a crazy idea,” Carlson replied. “I mean, I love animals and I don’t like the way factory farms treat animals, so I’m kind of sympathetic towards what you’re saying. And I meet people who are vegan and, one, there’s a super high level of fussiness that I find to be a major turnoff and two, they all look pretty easy to push over. So you can’t tell me that it’s that good for you if they all look like they’ll fall over in the wind, right?”

If you’re near a TV this evening check out my interview with #tuckercarlson on #FoxNews #tuckercarlsontonight #GoVegan #KindnessMatters pic.twitter.com/R5L4ahqCl4

“Well, we are a passionate group, us vegans,” Baur replied with a laugh. “But not all vegans are that skinny. In fact, the only U.S. male weightlifter who qualified for the Olympics in Rio is a vegan. And there are amazing vegan bodybuilders and athletes. Scott Jurek, the legendary ultrarunner — vegan. So, vegans can be very healthy as well.”

what does being vegan mean?

“Interesting. Well, you make a compelling case,” Carlson replied.“Let’s get to the fussiness point. I’ve never met a vegan who didn’t spend at least 70 percent of the day thinking about food,” he laughed.“You don’t wanna spend your whole life thinking about food.”

“Well, I don’t,” Baur replied. “I think it’s mainly the vegans you’re meeting are talking about it or the ones that say they’re vegan are talking about it, but there are many vegans that you wouldn’t know are vegan. As a vegan, for me, it’s about living as compassionately as possible, not participating in unnecessary suffering, and if we can live well without causing harm to other animals, why wouldn’t we?”

“I agree. You know what, I agree with you, I’m just going to say it: I agree completely there,” Tucker enthused. “But since most people are not gonna stop eating meat and meat is delicious, why not make an effort to push the companies that are causing undue suffering among animals – really, mistreating them, actually – to clean up their act a little? You said giving up meat entirely, why not push these big factory farms to knock it off?”

Humans share this planet with many other creatures, who we have been too quick to judge and exploit. All #life is #connected and we can learn a lot through #humility and #listening. #kindnessmatters #farmsanctuarylife #govegan #vegan #farmsanctuary #eatplants

Baur clarified that targetting factory farms is important and added that Farm Sanctuary supports campaigns that limit the suffering that occurs on factory farms, referring to legislative efforts to give confined animals more space. “So, we do that as well as encourage people to recognize that we can live well eating plants instead of animals.”

Carlson followed up with another question for clarity: “I love cheese. I like meat too, but I really love cheese — I’m not giving up burrata, period, or cheddar, period. Why is it harmful to animals to eat dairy?”

Baur explained the reality of dairy farms.“For a cow to produce milk, she has to have a baby, and the babies are taken away at birth. … And if it’s a male calf raised on a dairy farm, they’re useless, so they are actually raised to become veal calves. … And when [cows] are no longer profitable on the dairy, they’re sent to slaughter and usually killed at about three or four years old.”

Carlson maintained that there is a humane way to milk a cow and pivoted the discussion to the Yulin Meat Festival, where dogs are eaten, stating he believes it is grounds for “sanctions” against China, then stated that vegans never speak out against the event due to being to preoccupied with factory farm giants such as Tyson Foods.

Baur clarified that he is opposed to eating dog meat, added that a Chinese company is now the owner of Smithfield, the world’s largest producer of pork, and stated that promoting kindness towards animals across the globe is necessary.

don’t humans have dominion over animals?

Carlson admitted, as a conservative – adding that he hopes other conservatives would do the same -, he should not support Tyson. But, “many believe that we have dominion over animals. … So, if you’re starving on a mountain somewhere, and a goat was all you had, would you kill the goat and eat him or would you starve?”

Baur explained that while Tucker had a good, “fundamental” question, there is plenty of food in the world – and the issue of being trapped on a mountainside is not one that people have to worry about.

“If you kill and eat the goat, you have no more meat, but if you have that goat as a companion, then you enjoy life,” Baur concluded.“We have power over animals and with a lot of power comes a lot of responsibility. We can kill them, but whether we should kill them is a bigger question.”

Carlson admitted that he began the segment thinking that Baur was “probably crazy,” but ended up finding him to be thoughtful and reasonable.