If you have seen her TedTalk, you might have felt subordinate compared to this incredible human who has her ethics so figured out at the age of ten! In fact she’s the youngest ever Ted Talk speaker. And now, you can hear Genesis Butler herself speak at Moby’s Circle V festival this November!

The mini-festival, which doubles as a charity event for Mercy for Animals, will take place this year at the Regent Theatre in downtown Los Angeles. Before Genesis was announced as a speaker, the event was already looking exceptional: Moby himself is headlining, whereby he is expected to perform a unique live set – along with rapper Waka Flocka Flame and Kanal’s new band Dreamcar.  Circle V is set to have its own vegan beer garden offering samples from more than 20 breweries, and for the health-lovers a non-alcoholic vegan kombucha garden, and, for the education-seekers, the festival will feature special guest speakers, including talks with vegan athletes, plant-based chefs, and animal rights experts and activists.

And now we are very excited by one speaker in particular. Moby made the exciting announcement on Facebook, calling Genesis “one of [his] favourite people.“ 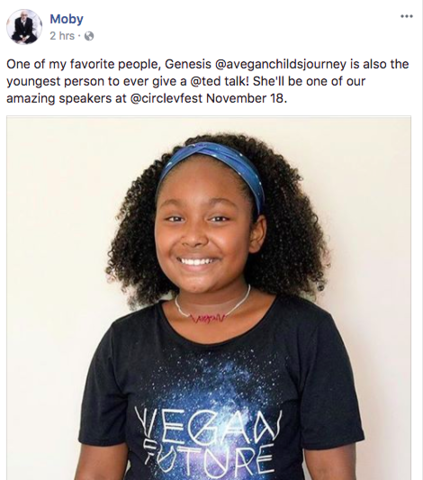 Genesis was only three years old when she inquired as to where her chicken nuggets came from. Upon finding out that what she eating was in fact an animal, she made the decision – as a three year old – to no longer eat meat. A year later, after finding out where the milk she was drinking came from, she gave up all dairy products.

Since then, this amazing child has won various awards for her commitment to activism and for being such a powerful voice for animals. The young lady frequently spreads the vegan message at events and meetings, including local city council meetings.

She is also featured in Vegan: Everyday Stories and The Invisible Vegan.

Her goal is to make the whole world vegan.

For all the amazing work she does, Genesis definitely deserves our support: to hear her speak, get yourself a ticket now!