The sneakers are the result of a collaboration between Munich-based high-end footwear engineering company nat-2 and Zvnder, a maker of mushroom leather-based accessories. The sustainable shoes feature an exterior of mushroom-based leather, eco-cotton terrycloth, and a PET plastic made from recycled single-use water bottles. Soles are made from cork and the insoles are rubber. The leather is made from the mushroom Fomes Fomentarius, a horse hoof-shaped fungus that grows on weak or dying birch and beech trees.

By building upon the mushroom leather developed by Zvnder founder and lead designer, Nina Fabert, nat-2 founder and designer Sebastian Thies was able to create a soft, suede-like material in order to give the vegan leather shoes a vintage look. The shoes are vegan, organic, chemical-free, and produced by hand in small batches by a small manufacturing facility in Italy. The process is reportedly highly labor-intensive, requiring a year of development after meticulously hand-harvesting mushrooms. 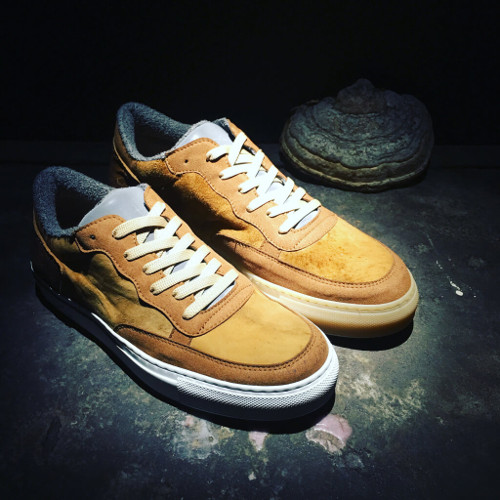 Zvnder was created by Nina Fabert in 2017, based on her master’s thesis of developing a vegan leather made from mushrooms. Her work has been featured at the prominent Martin Gropius Bau Berlin exhibition hall and has been awarded a scholarship by the Elsa Neuman Foundation.

Nat-2 was founded by Sebastian Thies, a sixth-generation German shoemaker whose family legacy dates back to 1856. Thies seeks to marry classic footwear with futuristic design in his work. He is especially inspired by ’90s streetwear and graffiti and the aesthetics of ’80s technology. The vegan sneakers by nat-2 and Zvnder using mushroom leather stand as the first collaboration between the two brands.

While leather has been a staple of the footwear industry for centuries, cruelty-free shoes are steadily gaining popularity. Earlier this year, popular alternative shoe brand T.U.K. released a new line of vegan shoes made from vegan leather and other materials. Further, Kat Von D’s vegan shoe line, Von D Shoes, featuring 28 designs, is set to launch in the US later this year. New technology is also giving way to companies that seek to disrupt the $100 billion leather industry. Startup biotech company Modern Meadow, which makes animal-free leather using cellular agriculture, recently teamed up with Europe-Based Evonik Industries to support the production and development of its lab-grown leather.