Called “Sundogs,” the plant-based compound is made from vegan pea and sunflower proteins. It can be used as a stabilizing and texturizing system to make vegan sausage and hot dogs, as well as regional varieties such as bockwurst or bratwurst, the company notes.

Sundogs gives plant-based sausages an authentic texture and bite, as well as a slightly nutty sunflower note that enhances seasonings and smoky flavors. According to Hydrosol, Sundogs is also the company’s first allergen-friendly vegan protein compound, free from soy, gluten, eggs, and dairy ingredients. It is also free from phosphates and nitrates, both common ingredients in processed, animal-based sausages.

“Sunflower proteins are completely new in the manufacturing of vegan meat alternatives,” said Hydrosol product manager Florian Bark.“It’s based on sunflower flour with high protein content, which we make by a special process during oil pressing. We use this very high-quality, attractive product in our new all-in compound, Sundogs.” 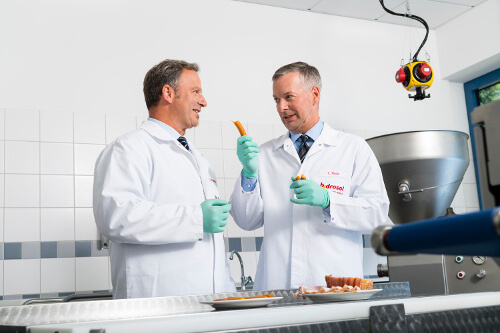 “The emerging trend of plant-based food is growing steadily and as a soy-free alternative, Sundogs is addressing the new consumer group,”  Bark added. Though Hydrosol specializes in the meat and dairy category, the site features sections for nondairy ice cream, vegan cheese and milk, and plant-based meat.

Traditional German cuisine places a heavy emphasis on processed meats, but it seems that currently, the nation is leading the plant-based movement. According to market research firm Mintel, Germany launched more vegan products than any other country in 2016. Further, a survey released last January suggested that the number of Germans following a plant-based diet had doubled over the past decade. Additionally, only 21 percent of citizens reported eating meat daily, likely due to concerns related to climate change, health, and animal welfare. The upcoming documentary “The End of Meat,” which is set to release in September, further explores the nation’s booming vegan movement.

However, the nation is not limiting itself to products from domestic producers. Last April, major German meat producer PHW Group signed a distribution deal with American brand Beyond Meat, making Germany the first nation in Europe to carry the vegan Beyond Burger. The PHW Group is responsible for introducing more vegan products to the market than any other company in 2016 and shows no signs of slowing down. Earlier this month, the company announced an “alternative protein” department to further develop new vegan meat products.