Updated September 17, 2019 |German meat brand Rügenwalder Mühle will discontinue production of its currywurst in order to scale up production of vegan and vegetarian meat.

The 185-year-old brand’s meatless range was highly successful in 2018. So successful, that it plans to make more vegetarian and vegan meat products at its headquarters in Bad Zwischenahn, Lower Saxony, German news source Stern reports.

To do this, Rügenwalder Mühle is even willing to stop production of currywurst, an iconic German sausage. Managing director Lothar Bentlage says that vegan and vegetarian meat products will make up 40 percent of the company’s sales by 2020. The family-owned brand made €212 million in 2018 — surpassing 2017’s sales by €11 million — with meatless products representing 27 percent of total sales. 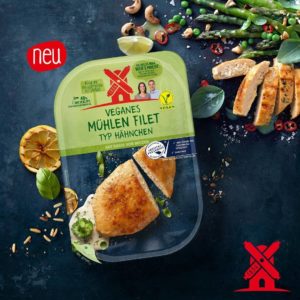 Rügenwalder Mühle says that meat will remain an integral part of its production. But the company aims to be an innovation leader in curbing climate change and contribute more to animal welfare. The brand added three new vegan products to its lineup earlier this year: vegan steak, vegan chicken filet, and vegan cold cuts. It is also open to eliminating animal products from its vegetarian range.

“The reason for this is changed consumer preferences; even vegetarians and more and more flexitarians are opting for vegan variants rather than vegetarian ones when they are presented next to each other on the shelf,” CEO Godo Röben told Vegconomist last year. “This may be for animal protection and environmental reasons or due to ethical concerns.”

A traditionally meat-heavy nation, Germany is now a leader in vegan food — the top country for new plant-based products in 2017, according to global data research firm Mintel. The UK dethroned it last year. Research also showed that 50 percent of Germans believe plant-based protein is just as nutritious as meat.

According to market research firm Nielsen, between mid-2018 and mid-2019, Germans bought €163.1 million worth of meatless meat.

“The appeal of products without animal-derived ingredients has extended far beyond the limited pool of steadfast vegans and vegetarians, carving a place within overall healthy and varied diets,” said Mintel global food and drink analyst Katya Witham.