Halving meat consumption could help Germany reduce greenhouse gas emissions (GHGs) by as much as 32 percent, according to a new study published in the journal Environmental Science and Technology.

Researchers from the Chinese Academy of Sciences analyzed various ways that meat emissions could be reduced, including through “better” animal farming practices and eating offal (animal organs). Researchers found that not eating meat is the most efficient way to reduce carbon emissions. The beef industry, widely recognized as one of the most detrimental to the environment, was confirmed to be the least “efficient.”

Meat consumption is on the decline in Germany, according to the 2018 Fleischatlas (“Meat Atlas”), an annual report that analyzes the environmental impact of animal agriculture. It found that German meat consumption has been on a steady decline since 2011, with the steepest drop occurring between 2015 and 2016, when it dropped to 59 kilograms per person from 60.6 per person. 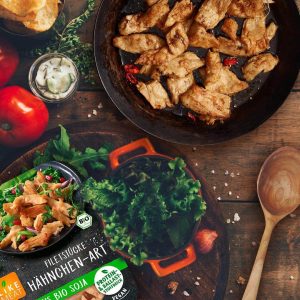 Eating less meat doesn’t mean an end to bratwurst, Vienne sausages, and steak. The nation was the world’s leader in vegan product launches up until last year, according to Mintel data.

Health and ethics are thought to be driving factors in overall reduced meat intake, but sustainability and climate change are other reasons Germans are choosing to eat less meat. The founder of vegan meat brand LikeMeat was a third generation meat producer who left the family business out of concern for the environment.

Germany is also where Veganz, the world’s first vegan supermarket chain, got its start. The chain carries a mixture of private label and national brands. Last September, its founder Jan Bredack was named one of the mentors for the ProVeg Incubator, which provides resources to emerging plant-based and cell-based food brands.

Germany’s rising taste for plant-based food was highlighted in the 2017 documentary “The End of Meat.” Through interviews with local innovators, director Marc Pierschel provides insight into how the traditionally meat-heavy country is embracing vegan food.