The brand has teamed up with Quorn to release a new vegan pasty filled with marinated Quorn pieces and vegetables.

The new plant-based meat option is the second vegan pasty the brand has released this year. In May, it relaunched its vegetarian Moroccan Vegetable Pasty with vegan filling.  Cornish Michelin-star chef Chris Eden developed the vegan recipe.

“We were delighted by the popularity of our Moroccan Vegetable Pasty, which won a Gold Award at this year’s British Pie Awards,” Ginsters managing director Kieran Hemsworth told Vegan Food & Living at the time. “We’re really excited to be able to update our recipe into a vegan-friendly edition, whilst maintaining that incredible flavor. Within our range of products, we aim to provide options to suit everyone’s taste preferences.” 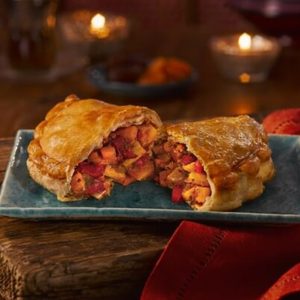 Vegan Pasties in the UK

The Cornwall-based company isn’t alone in offering vegan pasties to the UK. The Cornish Vegan Pasty Company specializes in fillings featuring potatoes and seitan, plant-based meat made from wheat protein.

“I started the company in 2016 when I realized there wasn’t much out there for vegans apart from a bland trio of veg,” said owner Sam Grady. “Most pasty companies have upped their game when it comes to a vegan offering since then but we’re the only one rivaling the traditional pasty for flavor.”

Not only is it popular in Cornwall, but the family-owned company also receives orders from as far away as Scotland and Wales.

Demand for vegan food is on the rise across the UK, which launched more plant-based food products than any other nation last year, according to global data firm Mintel. Thirty-four percent of Brits are consciously eating less meat, driven by reasons related to health and sustainability. Mintel also noted that consumers are “more willing than ever to expand their comfort zones” and “push themselves to the limit with new experiences.”

The new Ginsters Vegan Quorn Pasty will be available from UK retailers from September 22.