An arena at this year’s Glastonbury Festival will be made from reclaimed ocean plastic. The five-day festival returns to Pilton, Somerset each year, known for featuring some of music’s biggest names and aspiring stars. This year’s line-up includes vegan singers Miley Cyrus and Billie Eilish.

According to the BBC, the Gas Tower dance area at the Shangri-La Stage will be made from plastic found in streets, parks, and washed up on shorelines throughout Devon, Cornwall, and Somerset. The first beach clean-up to gather plastic waste for the tower took place on May 11.

The project is a collaboration between environmental charity Keep Britain Tidy, the Orca Sound Project, and Shangri-La’s creative director, Kaye Dunnings. Ten tonnes of plastic need to be collected in order to build the 360-degree arena.

“This ground-breaking project will see tonnes of plastic removed from our environment — where it has such devastating consequences on our wildlife and marine life — and put to good use,” said Allison Ogden-Newton, chief executive of Keep Britain Tidy.

The Gas Tower isn’t the only sustainable initiative at Glastonbury this year. Organizers announced a ban on single-use plastic bottles last February. Festival-goers are encouraged to bring their own reusable bottles instead, which can be filled at water stations.

“I’m thrilled that, together, we’ll be able to prevent over a million single-use plastic bottles from being used at this year’s festival,” organizer Emily Eavis told the BBC. 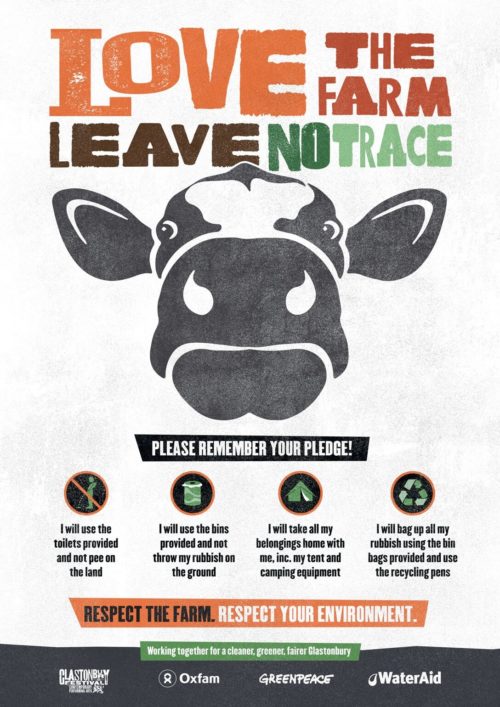 Preserving the land is important to Glastonbury — the festival takes a “fallow year” every few years to allow the ground to recover. Organizers launched the Don’t Pee campaign in 2016, educating festival-goers not to do their business on the land.

“Peeing on the ground causes toxic pollution of the water table,” the website explains. “The ground water runs into the central Whitelake River and down the valley for miles around. Wildlife and fish are affected if 200,000 revellers pee everywhere. The Environment Agency tests the water regularly, and has the power to close down the site if too many people have urinated and polluted the site.”

Organizers also spearheaded the Take It, Don’t Leave It initiative as part of its eco-friendly campaign, Love the Farm, Leave No Trace, which instructs festival-goers to clean up after themselves and avoid single-use items.

“Thousands of tents and abandoned camping equipment like airbeds, roll mats, chairs, blankets and gazebos are left after each festival. Think responsibly when you are packing your bags to come to Glastonbury, don’t bring items that you won’t be able to take back home again,” says the website.

According to the Association of Independent Festivals, around 250,000 plastic tents are abandoned at UK festivals each year. The organization hopes to encourage major retailer such as Tesco and Argos to stop marketing festival tents as single-use.