You can now get vegan glow-in-the-dark ramen in Los Angeles.

Noodle pop-up Nakamura says that it is first glow-in-the-dark ramen shop in the world. The restaurant combines theatrical storytelling with its signature glowing dishes. The lumen ramen shop is described as “a totally immersive dining experience including theatrics, storytelling, art, and folklore.” The dining experience showcases “high-end glow-in-the-dark food and cocktails created by award-winning chefs and designers.”

Nakamura told LIVEKINDLY that its meatless ramen option can be made vegan by omitting the poached egg. It comes with a pat of dairy-free truffle butter.

Drawing on Japanese culture and incorporating a mythical backstory featuring yōkai — Japanese demons — Nakamura first launched in Atlanta, where it served over one thousand bowls of ramen. 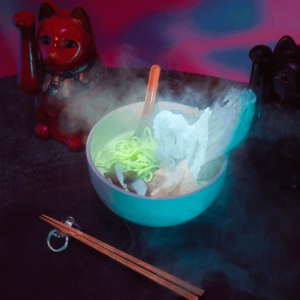 Quinine is used in both the lumen noodles and cocktails to create a glowing effect.

The menu at Nakamura was developed by Bompas & Parr, a London based food-art design studio (known for previous vegan projects). Using all-natural products, the dishes are prepared on-site by chefs from 8arm, utilising glow-in-the-dark ingredients such as quinine to infuse both the food and paired cocktails with a luminescent quality.

In order to attend a Nakamura event, customers will need to select a desired date and time and purchase their tickets beforehand. The dining experience will be thirty minutes long in total and customers can choose from either a VIP chef experience called omotenashi, or a ramen bar experience called tachigui. The first option will involve a performance element, while the second will involve eating at a counter as is commonplace in Japanese noodle culture.

LA is known for it’s innovative take on vegan businesses, with many entrepreneurs putting a modern spin on traditional and regional dishes.

Ramen Hood, an all-vegan ramen restaurant located in Downtown Los Angeles’s Grand Central Market, is famous for its savory sunflower seed broth and plant-based poached egg. The shop hosted a successful pop-up in New York City at the beginning of the year. Vegan noshes range from classic fast food burgers to plant-based Jewish cuisine and beyond.

Nakamura will be located at Yamashiro Hollywood in LA from July 2 to 21.