New public advertisements promoting the vegan lifestyle have landed in Toronto. The ads, from Go Vegan World, feature slogans such as, “Humane milk is a myth. Don’t buy it.”

Ireland based Go Vegan World is an animal-focused campaign that uses advertisements to encourage people to give up animal products. The first of its kind in Europe, the campaign was launched back in 2016 by the Eden Farmed Animal Sanctuary in Ireland.

“If you asked most people if they think it is wrong to unnecessarily harm other sentient beings, they would answer that it is,” explains Sandra Higgins, the founder, and director of Eden Farmed Animal Sanctuary, on their website. “This is because we all know that other animals feel. They have the capacity to experience pleasure and are harmed when we deprive them of the opportunity to do so. They experience physical and psychological pain when we hurt them. Like us, they have an interest in continuing their lives and do not want to die. Therefore, most people already hold the values that underpin veganism.” 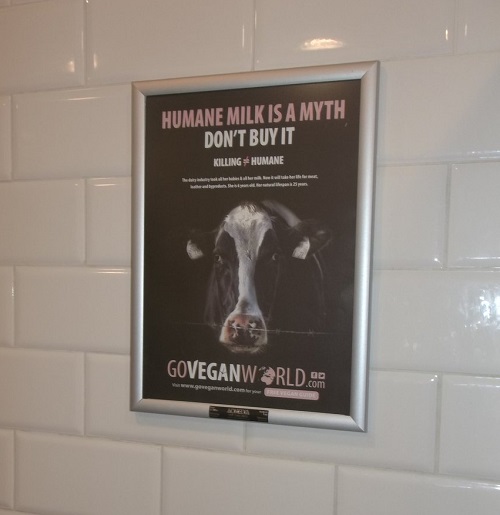 “The aim of Go Vegan World is to expose this inconsistency between our values and our behaviour,” continues Higgins. “We claim to respect fact, yet we live according to myth.”

In September of last year, the campaign launched across the UK with 500 billboard advertisements. And nationwide newspapers, The Independent and Metro, also ran stories on the influential campaign. Now, Go Vegan World hope to have the same success across the pond in Canada.

Other similar campaigns have had similar success around the world, Be Fair Be Vegan recently managed to land a hotspot in Melbourne where their advertisements were likely to be seen by over 2.5 million members of the public. “It is time these animals were seen in a new light, as sentient beings deserving of our consideration and protection,” stated one Melbourne resident, Patty Mark, who had spotted the ads. “I hope these ads will help to change the way we perceive our responsibility as supporters of this abysmal industry.”