A vegetarian and vegan-friendly cafe recently opened in Miami, off the Gold Coast of Australia, led by an internationally recognized and classically trained chef, Jared Peck. Doko Demo V is Peck’s first completely vegetarian concept, following a successful career of cooking in some of the most established kitchens around the world.

Doko Demo V is a Japanese-inspired restaurant, born from Peck’s obsession with new flavors and “East meets West fusion cuisine” according to his profile on the Australian Good Food Guide. The chef has years of professional experience working with animal products, but his self-prescribed claim to fame is his Pumpkin and Macadamia Nut Soup. He constantly strives to work with “the freshest ingredients” and is a huge proponent of cooking with the seasons, which lends itself well to vegan and vegetarian cuisine.

The restaurant and bar is currently open for breakfast and lunch, though dinner service began its soft launch today. The menu is somewhat misleading, as customers need to be reassured that the Beef Burger is “100% Beef Free” and the Chicken is made from soy. However, the eggs do come from an actual chicken. 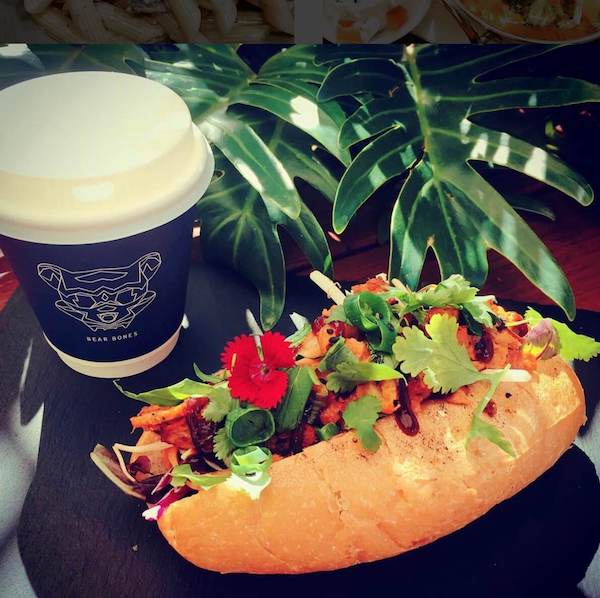 Once the initial navigation is sorted out, diners can find a wide array of enticing vegan options, all gorgeously plated with Chef Peck’s meticulous style. For breakfast, try the pretty pink Pitaya Bowl, Waffles with raspberry compote, or make your own plate by combining a variety of sides like savory vegan ham, beans, hash browns, and toast. On the lunch side, choose from a plethora of options including Chicken Noodle Soup, Soft Shell Gluten Free Tacos, or a Butter Chicken Curry Brown Rice Bowl. A children’s menu is also available.

Those staying for dinner can enjoy a beer and a pizza outside on the plant-filled patio, or opt for a pasta dish and a cocktail in the sophisticated dark wood-paneled interior.

Australia has seen a prevalent shift in its eating habits just in the past few years. While Aussies still love a good handheld meat pie, many are opting for the plant-based version, and several restaurants across the content have added vegan menus to their standard offerings. The country has also supported the rise of independent vegan bakeries and blossoming international fast-food chains, such as Veganarchy and Lord of the Fries, respectively.