According to a recent report published by Quartz, global interest in veganism has become more popular than vegetarianism. The media outlet analyzed the latest Google Search data to support this claim.

Quartz charted Google’s search interest ranking for both terms, vegan and vegetarian, between 2004 and 2018 (see chart below). In the first eight years of data, vegetarian surpassed vegan in terms of search frequency. However, during these years, both remained relatively stagnant with few peaks – and even minor declines – in interest. 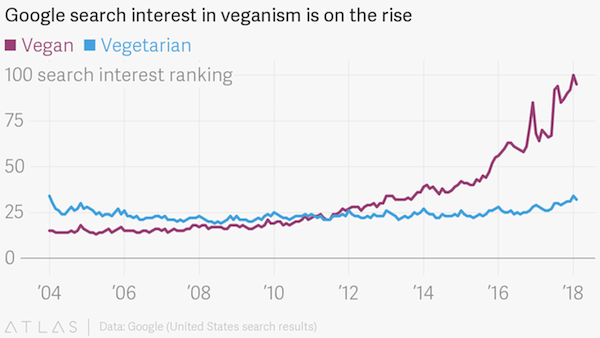 Around 2012, vegan began a slow upward tick, eventually passing vegetarian, which remained consistently low in regards to search interest. In 2016, vegan skyrocketed, reaching a record high in 2018. According to the data provided by Google Search, vegan has become a major internet buzz word.

This boom in vegan internet searches is not surprising, considering the rise in vegan-based business. This year, The Plant-Based Foods Association doubled its staff and created a full advisory board to better represent the emerging number of plant-based food companies. Vegan alternative products are gaining momentum in every category, from non-dairy milks and cheeses, to plant-based meat substitutes that look, taste, feel, smell, and even ‘bleed’ like meat. Further, vegan restaurants are expanding in metropolitan areas, and non-vegan eateries are beginning to add more vegan options to menus. Even major corporations like IKEA Food, McDonald’s, and Domino’s are beginning to tread into vegan territory.

The global rise in vegan food options is a direct response to the swell in consumer demand. Consumers, especially millennials, are showing more interest in where their food comes from, and as a result, they are opting for more plant-based options. According to this latest Google Search data, people are taking to the internet to hunt down these options and explore the vegan lifestyle.