Since launching, Greggs has had trouble keeping up with the demand for the vegan steak bakes. Its popularity is “bigger than anticipated,” a spokesperson told The Grocer.

“Our team is working hard behind the scenes to meet demand,” Greggs continued. “We’re prioritising supply in the 1,300 shops in which it has already launched. We still plan to roll out the Vegan Steak Bake nationwide and will confirm a date for all shops as soon as we can.”

Greggs has even launched a ‘Locate a Bake’ website to help customers track down a vegan steak bake. Customers can search for the nearest Greggs location with the new pasty in stock. The vegan bake features Quorn mycoprotein pieces, diced onions, and gravy.

Last December, an insider—who wanted to be named only as “Greg Greggs”—told Metro UK of the upcoming vegan steak bake.

“Vegan steak bakes are definitely happening,” said Greg Greggs. “I don’t have photos to confirm this but all employees I’ve spoken to regarding it are aware they’re arriving in the new year.”

“My manager has shown me stock sheets with ‘vegan steak bake’ written on them, ready for when our deliveries arrive,” they continued.

Another whistleblower—who identified themselves as Your Secret Greggs Man—informed Metro about new vegan donuts, as well as veggie soup. They said, “releasing 27th December is the new glazed ring donut which is now vegan. And our warm winter vegetable soup which is now also vegan.” 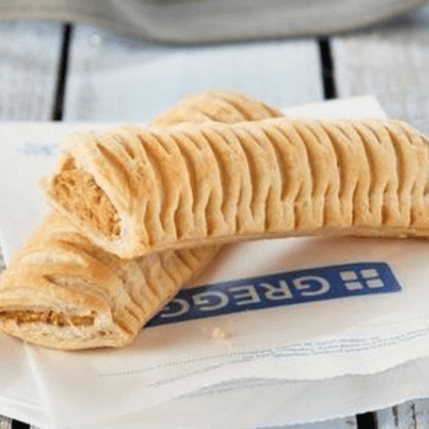 Rumors about new vegan Greggs’ products have been swirling for a while now. After the overwhelming success of its vegan sausage roll—which was launched at the beginning of 2019—customers are eager for new plant-based items from the chain.

The meat-free pastry—which includes a vegan sausage also developed by Quorn—was so popular, it helped the chain top £1 billion in sales for the first time ever.

The chain’s CEO Roger Whiteside is even vegan himself now.

After watching the 2018 documentary “The Game Changers”—which focuses on plant-based athletes and the myth that meat is necessary for protein—he decided to give the lifestyle a go. Whiteside said he frequently eats both the chain’s vegan wrap and the now-iconic vegan sausage roll.

He said at the North East Business Executive Awards back in October, “if you’d asked me three weeks ago which roll I preferred I would have said the original sausage roll, but I’m now attempting to live on a vegan diet.”

“Obviously there are arguments based around animal welfare and the environment,” he added. “But this was all about the health benefits, and I thought I should give it a go.”

The Gregg’s steak bake is available now for £1.55.