Climate activist Greta Thunberg was a guest on last night’s episode of “The Daily Show with Trevor Noah” to discuss climate change and how to fight it.

The 16-year-old arrived in New York City in late August to bring her activism to North and South America. She did just that in an interview with “The Daily Show” host Trevor Noah.

Noah opened with asking why Thunberg chose to travel to the U.S. via a zero-emissions yacht rather than by plane. She explained that she hasn’t flown for a few years due to the “enormous impact aviation has on the climate” and to set an example. Thunberg also acknowledged the privilege of her planet-friendly trip: “I am one of the only people in the world who can do such a trip, so I thought: why not?”

Noah then praised the teenage activist for her role in inspiring thousands across all borders and age groups — dubbed “the Greta effect.” It even effected Thunberg’s mother, an opera singer, who stopped flying to reduce her carbon footprint. Noah asked if Thunberg felt guilty about impacting her mother’s career, but Thunberg reasoned that the planet is the most important to her. “For all of us, it should be,” she added. 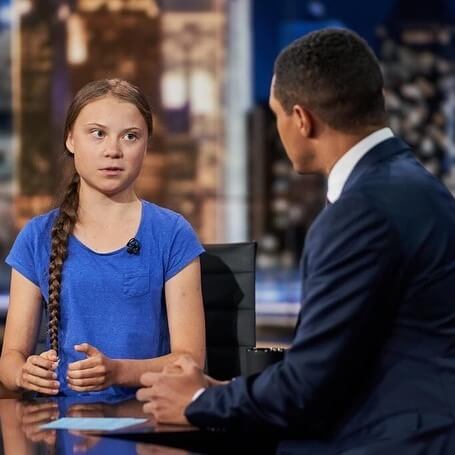 Noah brought up the “disconnect” between older and younger generations in regards to climate change, asking why younger people seem to care more about the planet. A Yale University analysis revealed that there is indeed a generational gap.

“I feel like it is more a direct threat. Others feel like ‘I won’t be alive then, so screw it,’ but we actually know that these consequences will face us during our lifetime,” said Thunberg. “And it is already happening now. And it will get worse.”

Thunberg added that in general, “the awareness is not where it needs to be,” but “among young people, the concern is bigger.”

Noah asked what she thinks people need to learn about the climate crisis. She replied: “pretty much everything.” Airplanes like the one Thunberg avoided aren’t all that contributes to the climate crisis. Animal agriculture — meat, dairy, eggs, and fish — are all linked to climate change. Thunberg herself, along with her family, follow a plant-based diet to be more sustainable.

She explained that even though studies show that temperatures are rising as a result of increased greenhouse gas emissions, there’s a lack of understanding around “how severe the crisis really is.”

Thunberg explained the importance of hitting the carbon emissions target set by the UN’s IPCC (Intergovernmental Panel on Climate Change) report. “If we continue at the same emissions level that we have now, we have less than eight and a half years until that [carbon emissions] budget is gone.”

Thunberg explained that people should do “everything” that they can to prevent climate change. But if she had to choose one, it would be: “Inform yourself.” She added that they should then push for a political movement that addresses climate change because such a movement “doesn’t exist now.”

“I think that what we should do as individuals is to use the power of Democracy to make our voices heard so that the people in power cannot continue to ignore this,” Thunberg added.

Noah asked if there’s a difference between the climate change discussion in the U.S. and Europe. Thunberg explained that in the U.S., it’s more of a question of if climate change is something an individual “believes in.” But in Europe, people treat it as a fact.

Thunberg will participate in the upcoming Climate Strike in New York City on September 20. She will also visit Canada and Mexico before traveling to Chile for the Santiago Climate Change Summit in Chile in December.