Greta Thunberg has met with many high-profile names. The vegan activist recently connected with Barack Obama, Arnold Schwarzenegger, and Alexandria Ocasio-Cortez to raise awareness about climate change. But her latest BFF isn’t a politician. She is quite the celebrity though. She’s Esther the Wonder Pig.

Esther has won the hearts of people around the world with her quirky online persona and outrageous wardrobe. With more than half a million followers on Instagram and another 1.4 million on Facebook, Esther is the most famous pig on Earth.

Esther was adopted by Steve Jenkins and Derek Walter in 2012. The pair were led to believe that she was a “micro pig” until she grew to be 600 pounds. Bringing Esther into their lives motivated the couple to stop eating bacon and go vegan.

Jenkins, Walter, and Esther — with help from Esther’s many supporters — founded the Happily Ever Esther Farm Sanctuary in 2014. There, the trio rescue and rehabilitate farm animals in need, spreading Esther’s “style of love and compassion,” known as the “Esther Effect.”

Sixteen-year-old Thunberg is the latest to experience the Esther Effect. Esther(‘s humans) shared an image on Instagram of Thunberg meeting the pig. “We were gonna change the world together, but she took my last cupcake so the future of our alliance is uncertain,” the Esther account wrote about Thunberg. Greta captioned it with a “go vegan” hashtag.

Another image was captioned, “I taught Greta my ‘Take a nap and forget about them’ technique for handling bullies. She mastered it quickly, though, so I just kept on napping.” 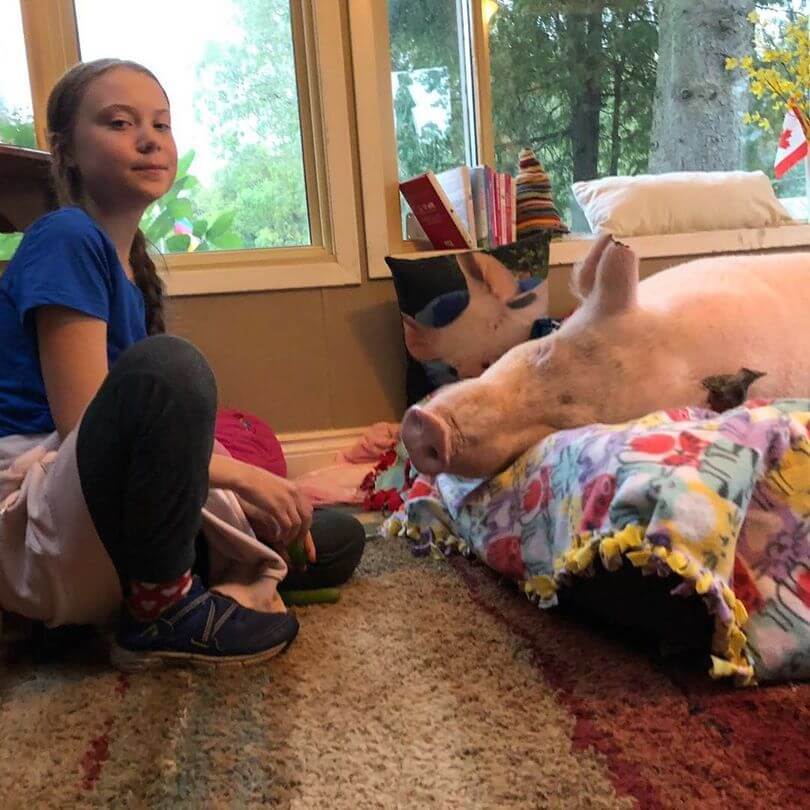 Greta Thunberg and Esther the Wonder Pig are both vegan. | @estherthewonderpig

Esther helps people make the connection between the meat on their plate and the animal it came from. The pig is housetrained, according to Jenkins and Walter. She “asks to go outside” and if nobody is around, she can open the door herself.

Esther can also open the refrigerator and kitchen cabinets, helping herself to food when she thinks no one is looking.

“She was incredible from the day we brought her home, super clever,” Jenkins told the Washington Post. “We’d see an intelligence in her we didn’t even see in our dogs.”

Last year, Oxford University researchers conducted the most comprehensive analysis of farming’s impact on the planet ever completed. The researchers found that going vegan is the most powerful tool in the fight against the climate crisis. Lead researcher Joseph Poore said adopting a vegan diet is “the single biggest way to reduce your impact on planet Earth, not just greenhouse gases, but global acidification, eutrophication, land use, and water use.”