Millions hit the streets recently to fight for the planet and demand more action is taken against the climate crisis. About 250,000 young people marched in New York City; among them was actor Jaden Smith and — of course — teen environmentalist Greta Thunberg.

Smith performed at the strikes alongside his sister Willow Smith. During his set, he said to the crowd, “we gotta change the world, we gotta do something different. We gotta leave the old world behind now for our children.”

Before encouraging the crowd to chant “heal the world” in unison, he continued, “we gotta create an impact, we gotta change people’s minds. We gotta show people that we really care about this. There’s 250,000 of us out here right now. This is the craziest thing I’ve ever seen in my life.”

Smith is a huge advocate for the environment. Together with his father Will Smith, he runs the sustainable boxed water company JUST Water. He doesn’t eat meat and consistently advocates for others to reduce their intake. He recently wrote to his eight million Instagram followers, asking them to at least give up meat on Fridays. 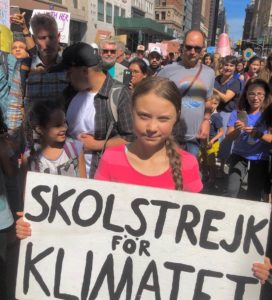 According to estimates, 250,000 turned out for the New York Climate Strike. | Greta Thunberg

‘No One Is Too Small to Make a Difference’

“The summers are getting hotter and hotter,” he told the strikers. “This is something we really need to pay attention to as a community and be aware.”

“These are the hottest summers ever recorded in human history and we have to know that and we have to understand our environmental impact on this earth and really make a difference,” he said.

After the strikes, he praised Thunberg’s speech at the march on his Instagram Stories. He said, “I just wanna say Greta’s speech today at the climate march was so inspiring. I hope we’re all ready to come together and create more sustainable solutions for the world.”

Just over one year ago, Thunberg was striking for the climate by herself on the steps of the Swedish Parliament. Fast forward to now, and she has millions of young people behind her.

In a speech at George Washington University, she said ahead of the Friday strikes, “right now I think there is an awakening going on. Even though it is slow, the pace is picking up and the debate is shifting.”

She added, “activism works. So what I’m telling you to do now is to act, because no one is too small to make a difference … see you on the streets.”