Titled “No One Is Too Small to Make a Difference,” the new book will compile 11 of the Swedish-born activist’s key speeches against global warming. The title is taken from the talk delivered at the COP24 UN climate talks last December, The Guardian reports.

‘The Voice of a Generation’

“We young people need to get angry and hold the old generations accountable for the mess they have created,” the 16-year-old Nobel Peace Prize nominee told MPs at COP24 UN last December.

She continued, “And we must realize that our future is on the line and we need to make our voices heard. The first thing I have learned is that you are never too small to make a difference.” 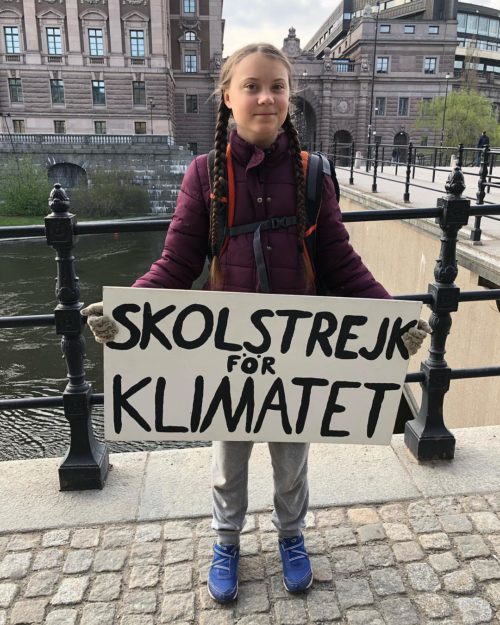 The book will be published by Penguin, which describes Thunberg as “the voice of a generation facing the full force of climate catastrophe … quiet, angry and unafraid, speaking truth to power.”

Last March, the Thunberg received a Nobel Peace Prize nomination for sparking a mass movement rallying against global warming. “We have proposed Greta Thunberg because if we do nothing to halt climate change, it will be the cause of wars, conflict, and refugees,” explained Norwegian Socialist MP Freddy Andre Ovstegard, one of Thunberg’s three nominators.

She was also named one of TIME Magazine’s 100 Most Influential People of 2019.

Climate Strike, an initiative that originally kicked off in 2015 on the first day of COP21, has grown into an international movement following Thunberg’s actions. Students across the globe have since skipped school to call attention to the demand for action.

Extinction Rebellion, a socio-political movement that uses nonviolent protest to call attention to global warming, has also gained traction since Thunberg began delivering speeches. A book is due out this June.

“Solving the climate crisis is the greatest and most complex challenge that Homo sapiens have ever faced. The main solution, however, is so simple that even a small child can understand it. We have to stop our emissions of greenhouse gases. Either we do that or we don’t,” she continued.

Thunberg’s speeches have not only caught international media attention, but also her actions are in line with her warnings. The teenage activist and her family follow a plant-based diet, which the largest-ever food production analysis found to be the most effective way to  reduce one’s carbon footprint. Her insistence also led her family to go vegan.

The strong support of Thunberg’s family will also be documented in an upcoming memoir titled “Scenes from the Heart,” written jointly by her mother Malena Ernman, her sister Beata Ernman, her father Svante Thunberg, and the activist herself. All proceeds will be donated to charity.

“No One Is Too Small to Make a Difference” is now available.