Häagen-Dazs just launched the vegan milkshakes of summer 2019 …but the catch is, you need to be in Portugal to try one. 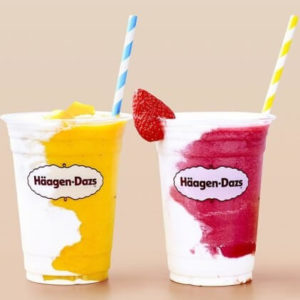 Häagen-Dazs first entered the nondairy ice cream market in July 2017 when it launched four flavors exclusively at Target. The company said that the release was a result of consumer demand. The Nestlé-owned brand soon added to its vegan ice cream lineup with additional flavors, including chocolate-coated ice cream bars, an amaretto-infused cherry almond, and a chocolate and vanilla cookies and cream swirl.

Earlier this year, Häagen-Dazs collaborated with TerraCycle, a global leader in recycling hard-to-recycle materials line ice cream cartons, to release reusable, refillable pints through a sustainability new program called Loop. A special feature of the packaging ensures that the vegan ice cream at the top melts faster than the bottom. Customers looking to further reduce their carbon footprint were able to order the brand’s vegan ice cream through Loop.

The vegan ice cream is on the rise, according to a recent report from Square, the company best known for its white card readers in shops. Between 2015 and 2018, sales of dairy-free ice cream climbed 220 percent and will likely continue to grow, Good Morning America reports.

Häagen-Dazs’ new Coconut Cooler milkshakes are currently available in Portugal for the summer.