Hailey Bieber turned to Instagram for advice on vegan food — and she may be looking to ditch meat.

The 22-year-old model, partner to pop singer Justin Bieber, recently visited Los Angeles-based vegan fast-food joint, Monty’s Good Burger. She wrote in her Instagram Story: “So I’m not vegan or vegetarian. I’m half Brazilian so trust me I love a good pichana…BUT I will say over the last week or so I have tried some of the most unbelievable vegan food I’ve ever had, and I want to keep exploring plant based!” 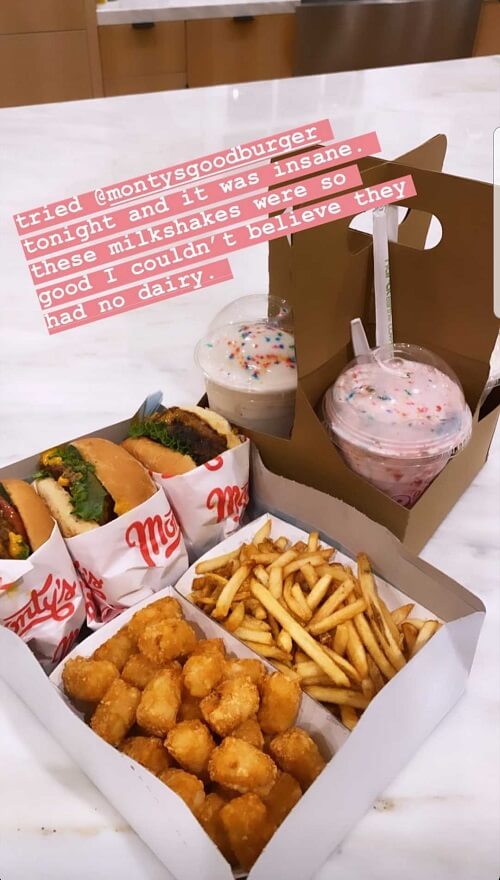 Sharing a photo of her purchase, which included three vegan burgers, two milkshakes, fries, and tater tots, Bieber described the meal as “insane.”

Although Bieber’s intention may have been to highlight how much she enjoyed her meal, in recent years, many are turning away from using words to like “insane” and “crazy” with respect to those living with mental illness. “For people able to change their everyday language, becoming conscious of how often they use ableist words like ‘crazy’ or ‘insane’ is one small way of reducing the stigmatizing effects of casually ableist expressions,” Lydia X. Z. Brown, a disability justice author and activist, told Mic.

Bieber and her partner Justin have also faced criticism for buying a pair of Savannah kittens from a breeder for $35,000. The kittens are a cross between a house cat and a serval, a type of African wildcat. Animal rights advocates, including PETA (People for the Ethical Treatment of Animals), highlighted the ethical issues with the breeding industry. According to the ASPCA, approximately 1.5 million shelter cats are euthanized each year. Justin told PETA to “suck it.”

The pop star added that PETA should focus on “real problems” like “poaching and animal brutality.”

The organization has run numerous campaigns pertaining to both.

However, animal rights runs in the family. Her uncle, vegan actor Alec Baldwin, has spoken out against SeaWorld and aquariums. So, it’s not out of left field that Bieber may become more compassionate toward animals.

Impressed by Monty’s, Bieber asked fans to send her suggestions for vegan food.