The 23-year-old model, married to pop singer Justin Bieber, made the announcement to her 28 million Instagram followers.

Hailey shared a photo of her homemade dinner, which consisted of soup and vegetable sushi. However, she added that she still occasionally eats sushi containing fish. She originally announced her pivot to a more vegetable-forward diet in July.

“Trying to transition over to eating mostly plant-based, about to watch ‘The Game Changers,'” she wrote in an Instagram Story.

The James Cameron-produced documentary explores vegan athletes and the misconception that you need to eat meat in order to compete. The film features some of the world’s most well-known plant-based athletes, including former governor of California Arnold Schwarzenegger and six-time Formula One champion Lewis Hamilton.

She added: “If you have any suggestions of other things to watch read send them my way!”

Bieber shared a photo of her meal, which included three vegan burgers, two milkshakes, fries, and tater tots. She then turned to Instagram for advice on vegan food.

In an Instagram Story, she wrote: “So I’m not vegan or vegetarian. I’m half Brazilian so trust me I love a good pichana…BUT I will say over the last week or so I have tried some of the most unbelievable vegan food I’ve ever had, and I want to keep exploring plant-based!” 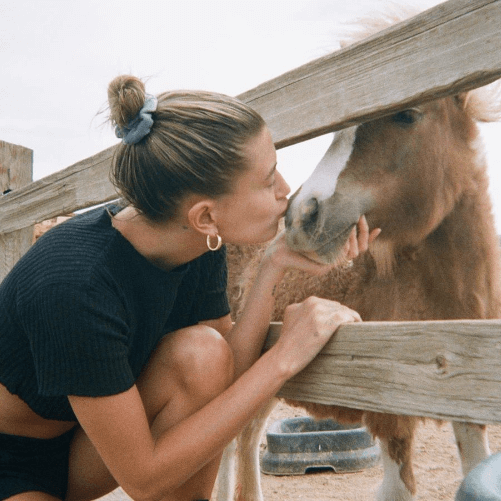 Her husband may have something to do with her interest in veganism.

Just a week prior to her Monty’s visit, Justin advocated that vegans should be given $100,000 per year.

This comes after American rapper Riff Raff shared a post on Twitter, stating: “I just remembered I can run for president.”

He outlined the policy changes he would make if he was elected president. These included free college, free health care, and no taxes. “If you are vegan you get $100k a year,” the rapper added.

Bieber shared the Twitter post on his Instagram Story to the more than 120 million followers he had at the time. The singer added “vote” stickers to the post so his followers could get involved.

Just like his wife, Bieber also enjoys eating vegan food. In 2017, he was spotted eating a vegan breakfast with his former girlfriend, Selena Gomez. The pair dined at JOi Café, an organic, plant-based cafe in California.

And in May 2019, the singer teamed up with Schmidt’s Naturals to launch a cruelty-free, vegan deodorant, Here + Now. The deodorant is made with natural ingredients like coconut oil and arrowroot powder.