The rock and roll-themed restaurant chain is welcoming burgers made by Moving Mountains, a plant-based food technology company.

The 6oz Moving Mountains Burger sizzles, smells, and tastes like meat but is made with plant-based ingredients including antioxidant-rich coconut oil, pea protein, soy protein, and mushrooms. The bleeding effect comes from the use of beetroot juice.

The patty is non-GMO and contains no hormones, antibiotics, or cholesterol. It has less sugar and fat than a conventional beef burger, according to the Moving Mountains website, and more fiber. The vegan patty offers 25 grams of protein and includes added B12.

Hard Rock Cafe, which was founded in 1971 in London, will serve the patty with lettuce, tomato, an onion ring, and cheddar cheese, which can be removed. The burger comes with a side of fries. 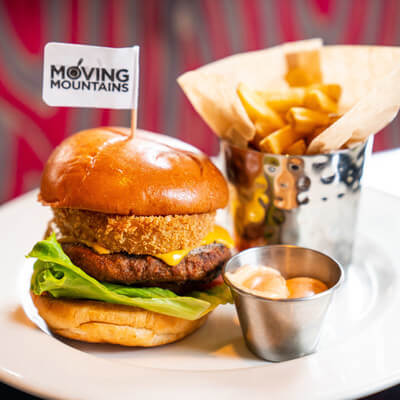 The Moving Mountains Burger was introduced to make plant-based eating more accessible to everyone. Founder of Moving Mountains Simeon Van der Molen said in a statement, “Our mission is to expand into new restaurants and cities making truly inspiring flexitarian dining available to everyone using the latest food technology.”

He continued, “Our launch into the world-famous Hard Rock Cafe, which is renowned for its legendary burgers, certifies the Moving Mountains Burger as a truly delicious burger that can compete with beef and match the size too with our 6oz patty!”

The vegan Moving Mountains patty will be available on June 14 in 23 Hard Rock Cafe restaurants across Europe, including Amsterdam, Berlin, London, and Rome.