Updated October 9, 2019. | American fast-food chain Hardee’s is the latest to tap into the growing demand for vegan food. Hardee’s will soon trial the Beyond Burger and the Beyond Breakfast Sausage at select locations. This makes it the first fast-food chain to offer vegan meat for breakfast, lunch, and dinner.

The typically meat-heavy restaurant has 1,841 locations in the U.S. Hardee’s will trial the Beyond Thickburger and Beyond Sausage Biscuit in Raleigh, North Carolina, and Kansas City, Missouri starting October 16.

The burgers and sausages are made with recipes unique to Hardee’s; they are not available anywhere else, Bloomberg reports.

Hardee’s is owned by CKE Restaurants, which also owns Carl’s Jr. Carl’s Jr. has 1,112 locations in the U.S., making it one of Beyond Meat’s biggest major restaurant partnership. 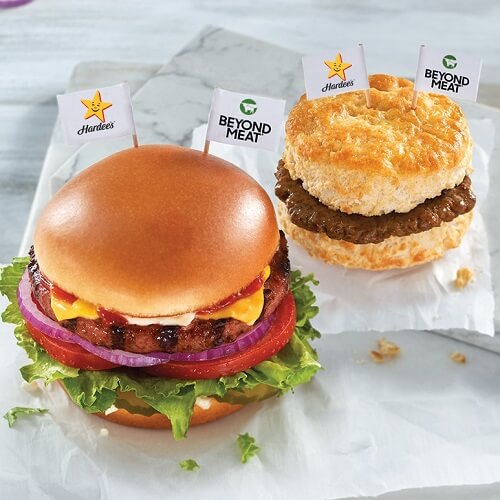 Hardee’s will serve Beyond Meat for breakfast, lunch, and dinner. | Hardee’s

More major chains are realizing the worth of plant-based options on their menus. A&W Canada added Beyond Meat to its menu last year. The fast-food chain credited the burger for its 10 percent sales rise, with some restaurants reporting that they were selling more plant-based burgers than beef ones. It also now serves the Beyond Breakfast Sausage.

Burger King experienced a sales spike of 28 percent following the launch of its Impossible Whopper, which features plant-based meat made by Impossible Foods. Burger King’s competitor McDonald’s — which has not yet added a vegan meat burger option in the U.S. — only saw a 2 percent growth in the same period.

The number of unique customers dining at Burger King jumped up by 15 percent in the month that it launched its meat-free burger.

“We’ve learned that we’re reaching a brand new guest, an incremental guest, that we hadn’t touched prior to launching it,” Owen Klein, VP of Global Culinary Innovation at CKE, said to Bloomberg. “Since late 2018 when we launched, we’ve sold over 4 million Beyond patties at Carl’s Jr., and a lot of them were to new faces that didn’t frequent Carl’s Jr. prior to that launch.”

Hardee’s will start selling the Beyond Thickburger and Beyond Sausage Biscuit on October 16.