Haribo isn’t known for its vegan offerings. Most of the German confectionery company’s recipes include beeswax, which is used as a glazing agent, and beef or pork gelatin. Gelatin is a protein obtained by boiling the skin, tendons, cartilage, and/or bones of cows and pigs. It’s used as an ingredient in many products like non-vegan marshmallows, yogurt, cakes, cosmetics, shampoos, and alcohol.

Haribo’s latest candy is made without gelatin or any other animal product, making it suitable for vegans. The recipe for the soft jelly sweets includes fruit juice concentrates from lemons, oranges, strawberries, and apples, as well as concentrates from black carrots, radishes, and safflower.

The candy comes in a golden 11-inch-tall bear-shaped container. 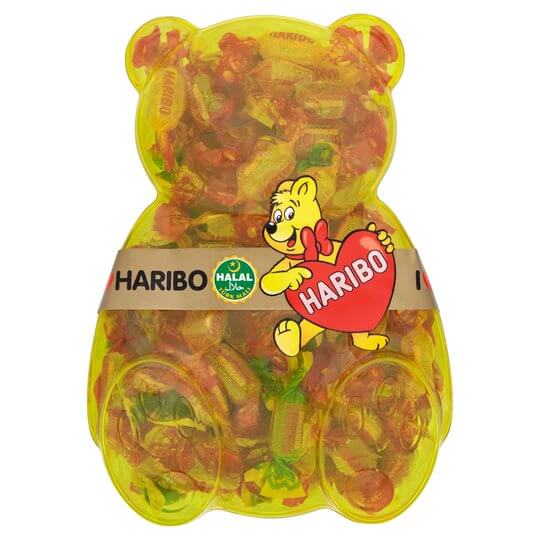 The vegan Haribo sweets come in a bear-shaped container.

More people are seeking out sweet treats with animal-free ingredients lists and companies are keen to keep up. 2018 data by market research brand Mintel found that the number of vegan candy launches increased by 140 percent since 2013.

Marks & Spencer introduced gelatin-free vegan gummy flamingos earlier this year and last year, the classic ’80s candy Bonkers! was re-launched as vegan after the original non-vegan version of the soft fruit chew was unavailable for more than 20 years.