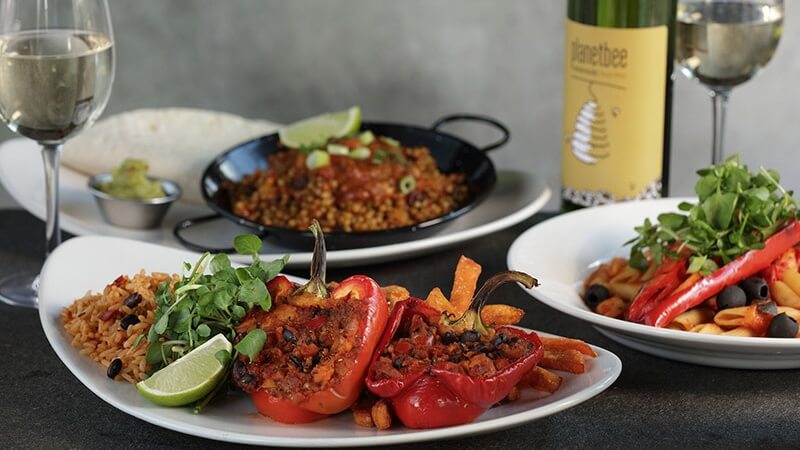 UK pub chain Harvester, that operates more than 220 locations across the country, has launched a new vegan menu.

The new plant-based Harvester menu includes an Aubergine & Red Lentil Tagine topped with a Moroccan-inspired stew, as well as a Jamaican-style Katsu Curry topped with breaded aubergine, sweet potato, and cauliflower. Peri-Peri Tofu Skewers are also on offer, and in some locations, a Vegan Sundae Best has been spotted as well as Blackcurrant Mousse and a Beyond Bean Burger.

“You know us – we’re all about giving out guests plenty of choice, and we want it to be easy for you to find a dish that not only suits your requirements but tastes great, too,” says Harvester on its website. “Our new menu is full of great new flavours that everyone will love.”

The chain is even on animal rights organization PETA’s list of Vegan Options at Chain Restaurants alongside a number of other popular chains, including Italian-American favourite Frankie & Benny’s, which launched a new vegan menu at the beginning of January.

“Having something for everyone is so important to us at Frankie & Benny’s,” said the restaurant’s head of food Holly Davies. “We have worked in collaboration with PETA and we now have over 20 vegan dishes across the menu.”

“We know the interest in vegan food is absolutely booming and not just for vegans,” she added. “And because of this, we wanted to try something a little bit different.”

The chains join a number of other restaurants and supermarkets launching new vegan and veggie options this January, as the Veganuary campaign – which encourages consumers to opt for plant-based foods over animal products for one month – booms in popularity.

Pizza Hut, Greggs, Zizzi’s, and TGI Fridays have all introduced new vegan options recently in a bid to keep up with soaring consumer demand.

According to a recent study, nearly 3 million Brits are expected to ditch eggs, meat, and dairy this year for environmental, health, and animal welfare-related reasons.