(Updated November 16, 2020) Once upon a time, fries and sad, bare salads were the only vegan options you could find at fast food chains. Those days are done. Today, even the top fast food giants offer plant-based choices—and you can even find healthy options, too.

Hungry? Here are 65 of the healthiest vegan meals you can order at fast food restaurants. 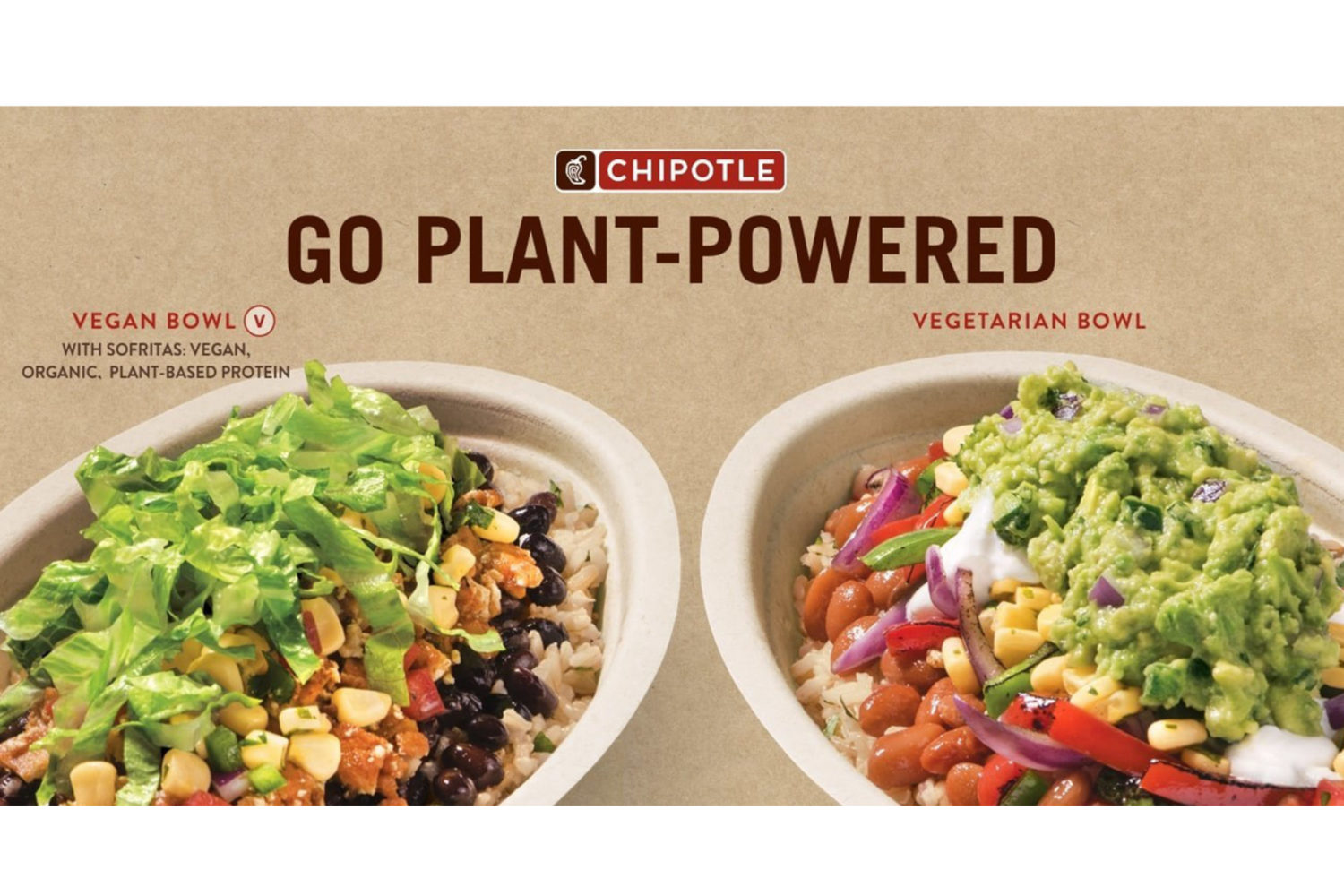 The Chipotle menu is vegan-friendly. | Chipotle.

Chipotle is popular for its customizable meals and having multiple plant-based protein options (sofritas, black beans, and pinto beans), plus greens, veggies, and rice. Locations in Denver and Colorado are even trialing cauliflower rice. Here’s how to eat healthy and vegan at Chipotle. Remember to add guacamole (and proceed to ask yourself why guac still costs extra if you’re skipping meat and dairy).

Open late and cheap as heck, Taco Bell is the destination for late-night meals on a budget. Unfortunately, Taco Bell recently removed some beloved vegan menu staples, like the 7-Layer Burrito and potatoes, but new plant-based items may be on the way.

“While change is hard, a simplified menu and innovation process will leave room for new fan favorites, continued progress in categories such as plant-based diets, and even opportunities for the return of some classics on a limited-time basis,” the company said in a statement.

So, vegan meat may be on the menu soon. Taco Bell Spain is already ahead with its vegetarian oat-based filling. Despite the menu changes, Taco Bell is still very vegan-friendly and allows several customizations to any menu item. Replace any meat with black beans. Then, make your order “fresco style” to replace dairy with pico de gallo.

At Subway, you can customize a vegan sandwich or wrap. Certain options, like the falafel, are only available at select locations. Subway also trialed a Beyond Meatball Marinara sandwich, featuring plant-based meatballs made by Beyond Meat in September 2019. The vegan meatball sub launched in Canada earlier this year, so a US launch may be on the way. In the UK, Subway also offers a Meatless Meatball Marinara on its permanent menu.

The biggest bagel chain in the U.S., Einstein Bros., offers vegan cream cheese made by the dairy-free brand, Daiya. But, you can also have your bagel with avocado, peanut butter, hummus, or jelly. You can also add vegetables, like arugula, cucumber, capers, spinach, and tomatoes. More than 70 percent of the bagel menu is vegan, including blueberry, pretzel, potato, French toast, and ancient grain. The chain may even add vegan Beyond Breakfast Sausages nationwide if the Denver test does well. Swap the veggie cream cheese on the Avocado Veg Out sandwich with Daiya to make it vegan. 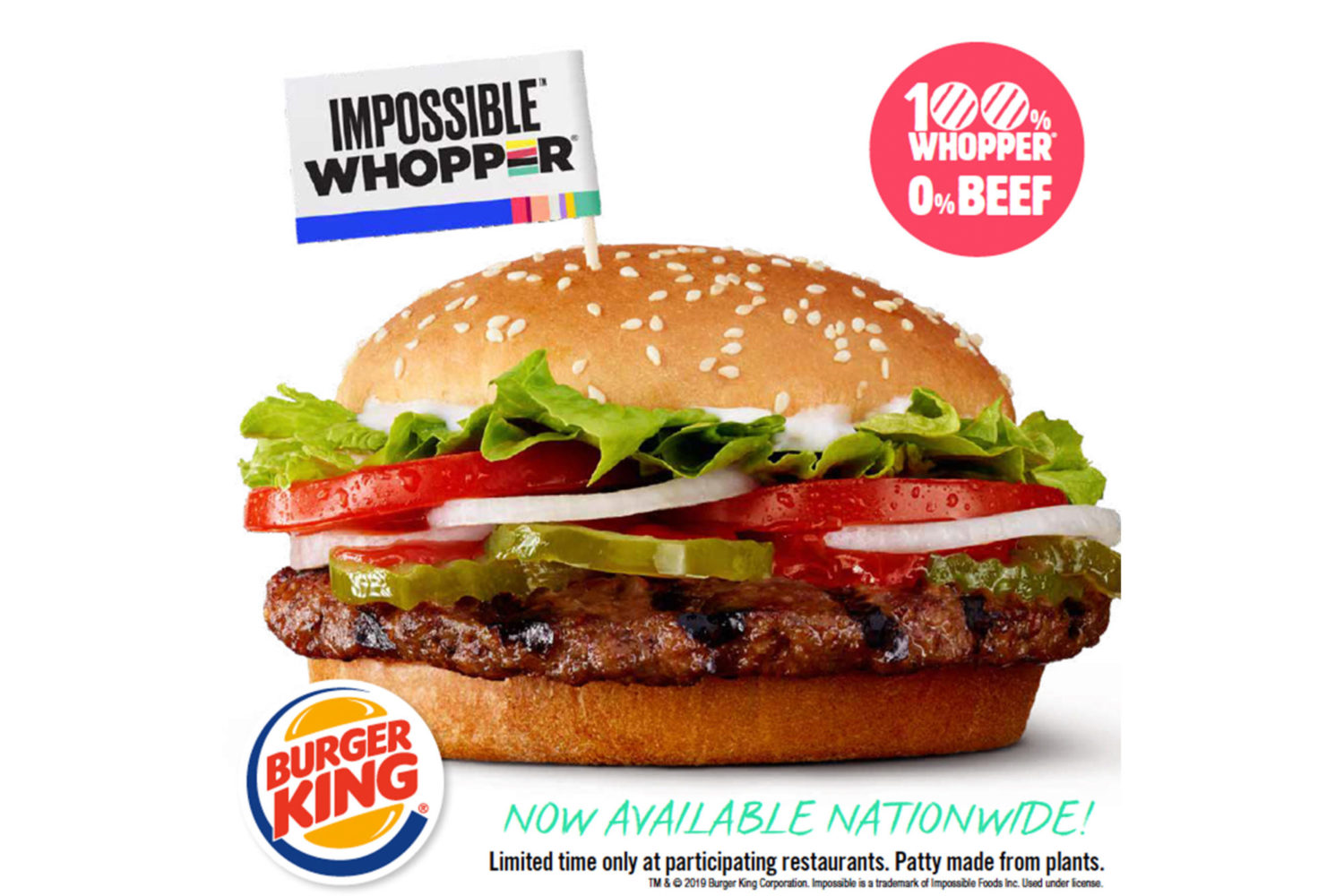 You can order the Impossible Whopper without mayo to make it vegan. | Impossible Foods.

Gone are the days of ordering the side salad and fries. Burger King Launched the Impossible Whopper in late 2019 after a successful trial and it’s been a hit ever since. Order without mayonnaise to make it vegan. The fries are vegan, too. 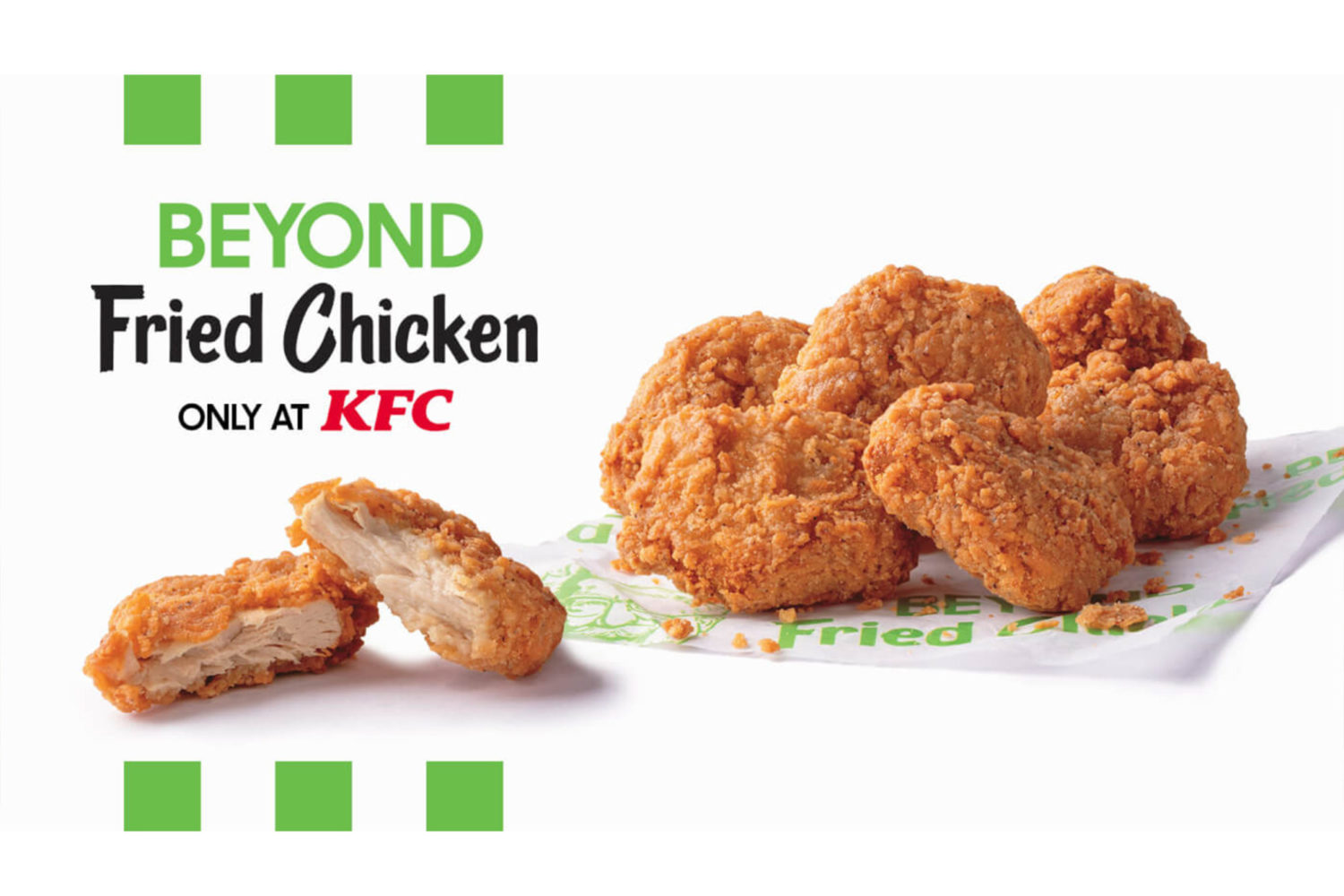 While not nationwide (yet), KFC has trialed its vegan Beyond Fried Chicken in Atlanta, Charlotte, Nashville, and most recently, Southern California, signaling that a national launch may be on the horizon. In the UK, KFC offers the Quorn-based Imposter Burger.

While you can order a latte with multiple options for plant-based milk, Starbucks’ vegan options are still limited in the U.S. But, you can grab oatmeal, some overnight grains, or a bagel (plain, blueberry, cinnamon raisin, or sprouted grain) with avocado spread. It also carries vegan snacks, such as fruit bars, Hippeas, and chips. It launched a breakfast sandwich made with vegan Impossible Breakfast Sausage, which includes dairy cheese and egg, but it may be a sign of future menu items. A positive sign: one location outside of Seattle is testing a fully vegan version.

Beyond Meat’s vegan beef crumbles were added to the Del Taco menu last year. The fast food chain has a few items marked vegan on its menu, but you can also swap beef for Beyond Meat crumbles or ask for something without cheese or sour cream. The crinkle-cut fries and hash brown sticks are also vegan.

Fast-casual burger joint Umami Burger offers three different takes on the Impossible Burger. Plus, you can order it with vegan cheese.

The Pan Pizza, Hand-Tossed Crust, and Thin ‘N Crispy Crust doughs are all vegan. Choose Marinara or Buffalo Sauce, load up on vegetables, and enjoy. Locations in the UK and Australia offer dairy-free cheese, but the US has yet to announce any plans to add it. The US locations are trialing a Beyond Meat sausage topping, so keep your fingers crossed that it’ll become part of the permanent menu. 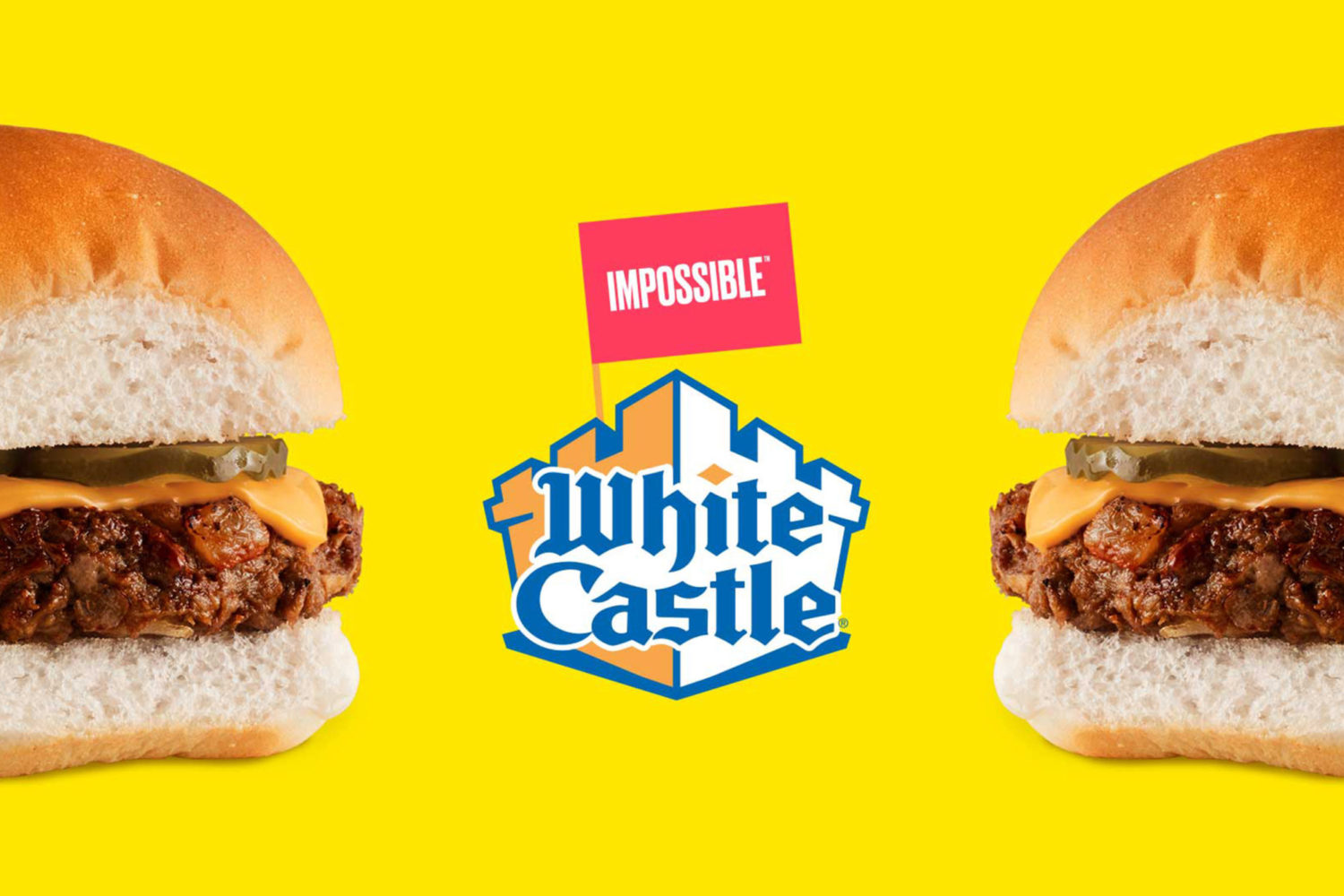 White Castle became the first mainstream fast food restaurant to offer the Impossible Burger in 2018 and it’s still going strong today. It also trialed vegan cheese in the New York and New Jersey area earlier this year, “with the hope of taking it to other markets in the future,” according to White Castle vice president Jamie Richardson. Oh, and the fries are vegan.

To order a vegan pizza at Domino’s, get the thin crust with tomato or barbecue sauce and add vegetables to your heart’s content. You can also order plain pasta with vegetables (the marinara sauce contains dairy), the Mediterranean Veggie Sandwich (without cheese), and the Garden Salad. To make the salad vegan, order it with the Italian, Catalina, and balsamic dressings and without croutons or cheese.

UK locations of the chain launched dairy-free cheese earlier this year, and Australian customers have had the option since 2018.

Coffee and donut chain Dunkin’ launched the Beyond Breakfast Sausage sandwich in late 2019. To make it vegan, order it without egg or cheese (and add a hash brown for food measure). The Cinnamon Raisin, Plain, Everything, and Sesame bagels are vegan. CEO David Hoffmann said that the chain is looking into adding a vegan donut option earlier this year.

The Veggie Burger at Habit Burger Grill is vegan without modification, as are the regular and sweet potato fries. For salad, hold the croutons and cheese and swap meat or eggs with the veggie patty. Choose from the fat-free Italian dressing, olive oil, or lemon for dressing.

The original hand-tossed dough is vegan. For the sauce, choose original or BBQ and add all of the vegetables. The breadsticks are vegan, too. In the UK, you can order vegan cheese and meat toppings.

After the popularity of the Beyond Burger at A&W Canada, US locations launched the vegan-friendly burger in selected locations across 29 states earlier this year. To make it vegan, order it without burger sauce and mayonnaise.

Make the Beyond Famous Star vegan by holding the mayonnaise and cheese. The Beyond Sausage Burrito can be made vegan by ordering it without eggs or cheese.

Owned by CKE Restaurants Holdings, the same parent company as Carl’s Jr., Hardee’s offers similar options. The Beyond Sausage Burrito is vegan without eggs or cheese. For the burger, leave off the mayonnaise and cheese and order it on lettuce instead of a bun.

Most items at this vegetarian establishment can be made vegan with modifications noted on the menu. Here are some of the healthiest options.

Not only is everything at Veggie Grill vegan, but the menu is extensive, featuring sandwiches, bowls, salads, sides, and desserts. These are some of the healthiest things on the menu.

This all-vegan burger joint has a delicious menu featuring burgers, sandwiches, and more. You can choose the classic “beefy” burger or a black bean patty for any of the burger options.