January has set in and the festivities may be over, but that doesn’t mean you can’t treat yourself if you’re back in the office. Whether you’re trying out the vegan lifestyle for January, you’re a plant-based veteran, or you simply want to try something new, these 19 vegan sandwiches — available in the UK — are sure to brighten up your lunchtime.

19 Healthy Vegan Sandwiches In the UK to Kickstart Your Year 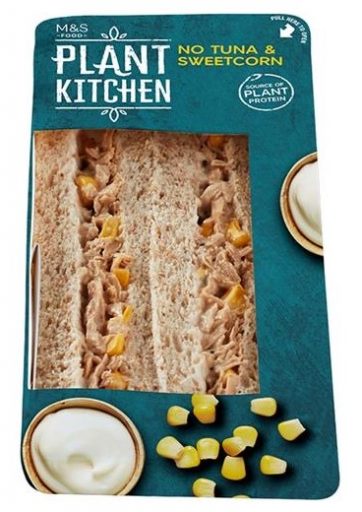 Miss being able to grab a tuna and sweetcorn sandwich on the go? Marks & Spencer has got you covered. The UK supermarket chain has added a new vegan tuna sweetcorn sandwich to its Plant Kitchen range. The “tuna” consists of marinated soy protein, which is mixed with egg-free mayonnaise and, of course, sweetcorn.

“With one in four M&S customers choosing a more flexitarian diet, this is a super exciting trend that’s showing absolutely no signs of slowing down,” said April Preston — the director of product development at Marks & Spencer — in a statement.

She added, “following on from the successful launch of our Plant Kitchen range earlier this year, we’ve turned the heat up and challenged ourselves, focusing particularly on turning well-loved products into plant-based versions, looking at alternative plant proteins, experimenting in flavors and celebrating vegetables in all their forms.” 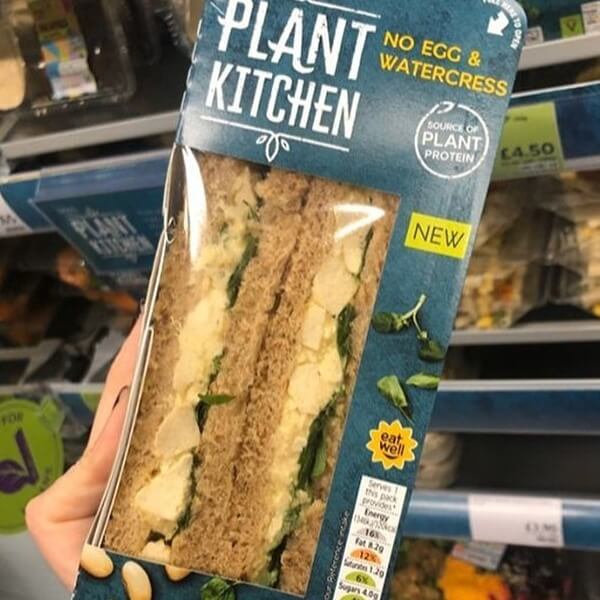 Not content with fulfilling cravings for vegan tuna, Marks & Spencer has also created its own vegan egg and watercress sandwich. The chain is also launching a grab-and-go Smokehouse No Chicken wrap and a No Smoked Salmon & Potato Salad. 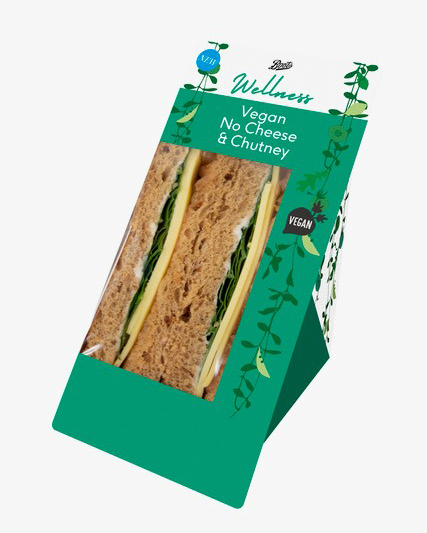 Boots is expanding its range of vegan lunch options again.

UK health and beauty retailer Boots is known for its varied selection of lunchtime sandwiches. In 2019, it really stepped up its vegan meal deal game and offered a number of different options throughout the year, including a meat-free chicken and sweetcorn sandwich. Books UK Vitamins Expert Parminder Kaur said at the beginning of 2019, “there is no denying that veganism has taken the UK by storm.” 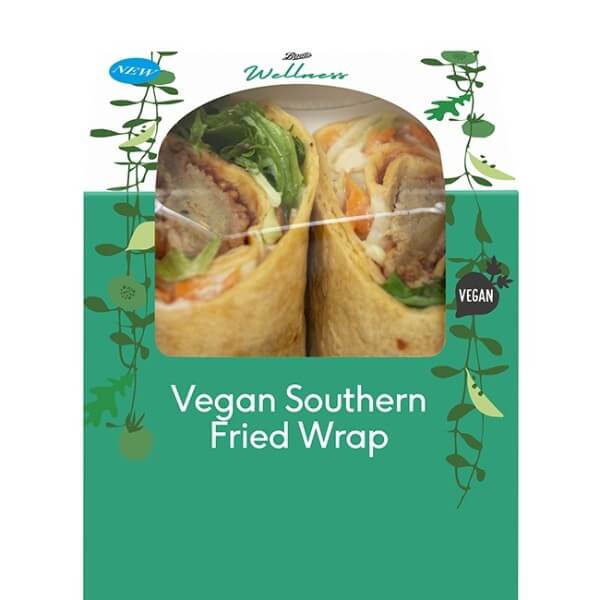 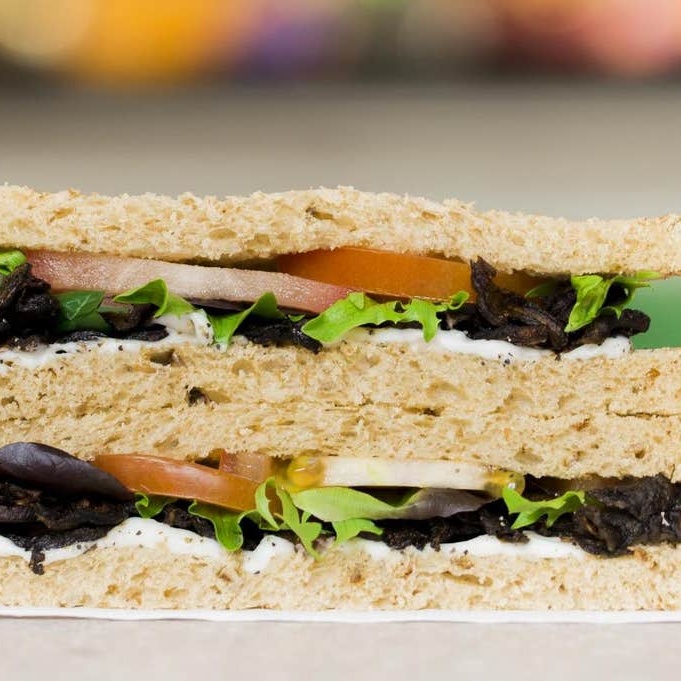 Veggie Pret — owned and created by Pret A Manger — has a Vegan Classics range. It includes a chickpea tuna mayonnaise baguette, a tofu-based egg mayonnaise baguette, and a hoisin mushroom “duck” wrap.  It also includes The VLT sandwich, which features roasted shiitake mushrooms instead of bacon, sliced tomatoes, green salad, and egg-free mayonnaise.

Pret’s Global Head of Food Innovation Hannah Dolan said in a statement, “Veggie Pret is a space where we’ve had a great opportunity to experiment with vegan and veggie food. It’s our mission to make it easier for customers to eat less meat.”

She added, “so we challenged ourselves to recreate the delicious flavors and textures of our meaty bestsellers, using only vegan ingredients. We’re excited for everyone, (vegans and non-vegans alike), to try The Vegan Classics – and to see if they can tell the difference between the new vegan recipes and the originals.” 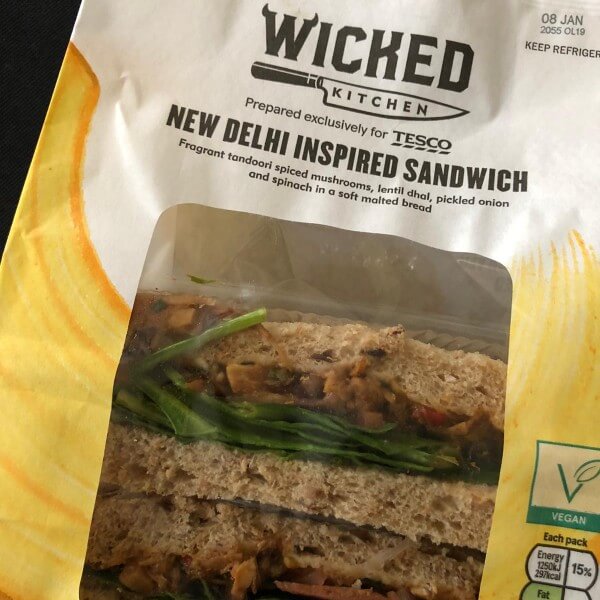 Wicked Kitchen has added new sandwiches to its range.

Wicked Kitchen launched in Tesco at the beginning of 2018. Since then, it’s gone from strength to strength. The plant-based range includes ready meals and vegan meat, as well as wraps, sausage rolls, and sandwiches, including the new New Delhi Inspired Sandwich. The latter includes tandoori spiced mushrooms, pickled onions, spinach, and lentil dahl.

Derek Sarno — Tesco’s Director of Plant-Based Innovation and co-creator of Wicked Kitchen — told LIVEKINDLY earlier this year, “the biggest impact we can have as individuals to ensure the betterment of our own health and the health of the planet is to eat more plants.” He said Tesco is making it “easier than ever” for customers who are interested in eating plant-based foods “by providing the most inclusive range of vegan options to date.” 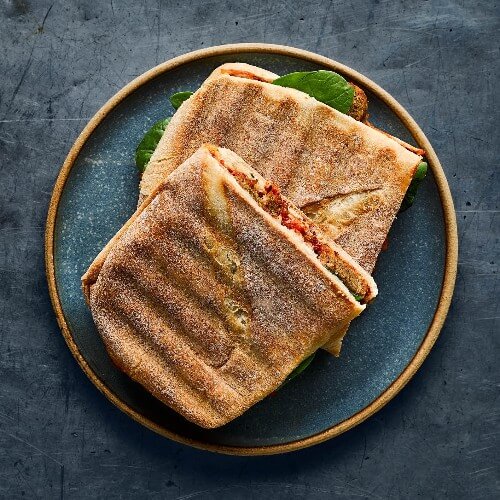 Caffè Nero launched a new vegan menu in January 2020. The options include vegan croissants, sausage rolls, and a variety of sandwiches, ciabattas, and paninis, including the vegan meatball panini. It features meatless meatballs in a tomato ragu, with egg-free mayo, spinach, and dairy-free cheese.

“This menu is not only perfect for those following a vegan diet or purposely trying to reduce their meat intake,” said CEO Will Stratton-Morris in a statement. “In fact, the products are such high quality that you wouldn’t know they were vegan.” 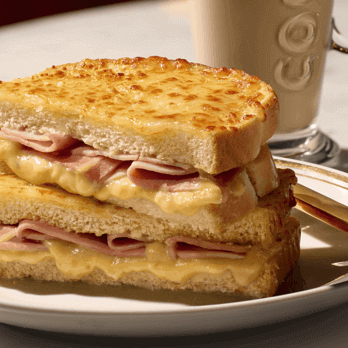 Costa Coffee is launching a range of vegan options, including a ham and cheese toastie, for January. 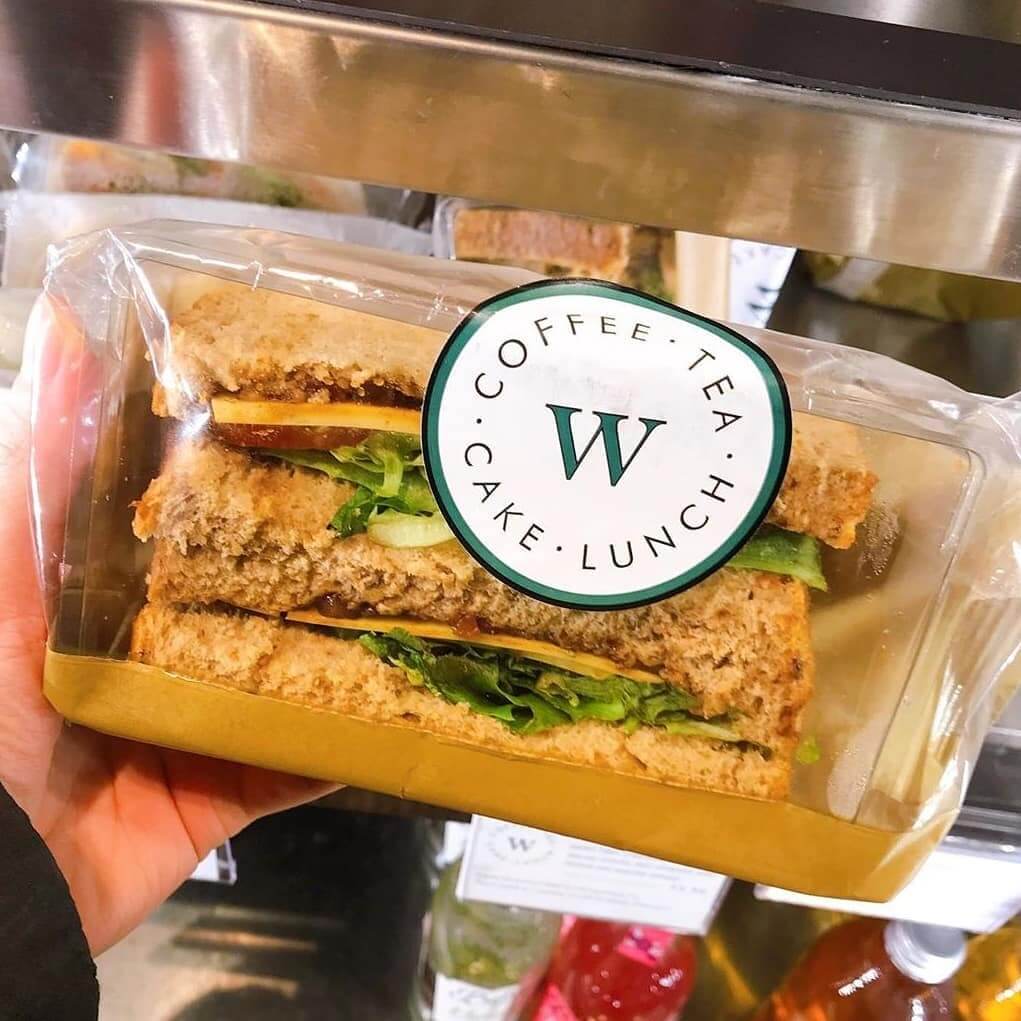 Book shop chain Waterstones recently updated its cafe menu, it now sells vegan cheese and pickle sandwiches. It also sells vegan cookies, brownies, and Bakewell tarts. If you want to bury your head in a book while you eat your lunch, the book shop chain now sells more than 2,000 books with the word “vegan” in the title. 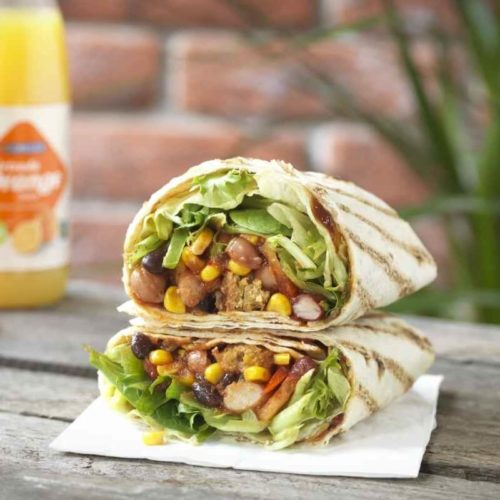 Popular bakery chain Greggs’ offers a Mexican Bean and Sweet Potato Wrap, complete with spicy tomato and jalapeño sauce and fresh salad leaves. If you’re in the mood for a pastry, the chain also offers its signature vegan sausage roll, as well as the brand new Vegan Steak Bake. The bake includes the same 96 layers of puff pastry as the original version, but, instead of beef, it features vegan Quorn pieces. 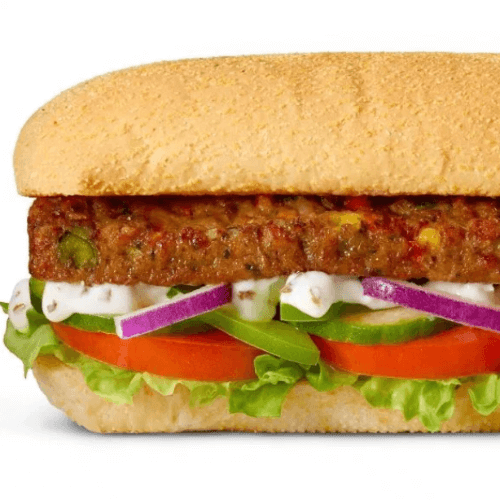 The chain also offers vegan Signature Wraps, and, towards the end of last year, it began trialing a vegan meatball sub in select locations. The Vegan Meatball Marinara sandwich was launched nationwide across the UK earlier this month. 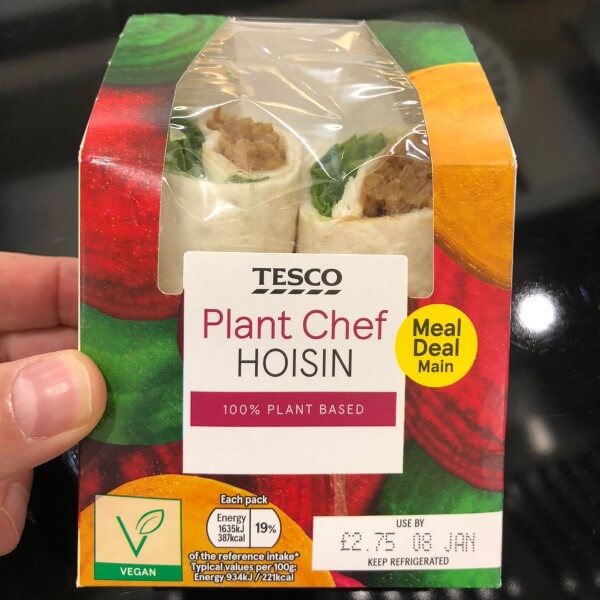 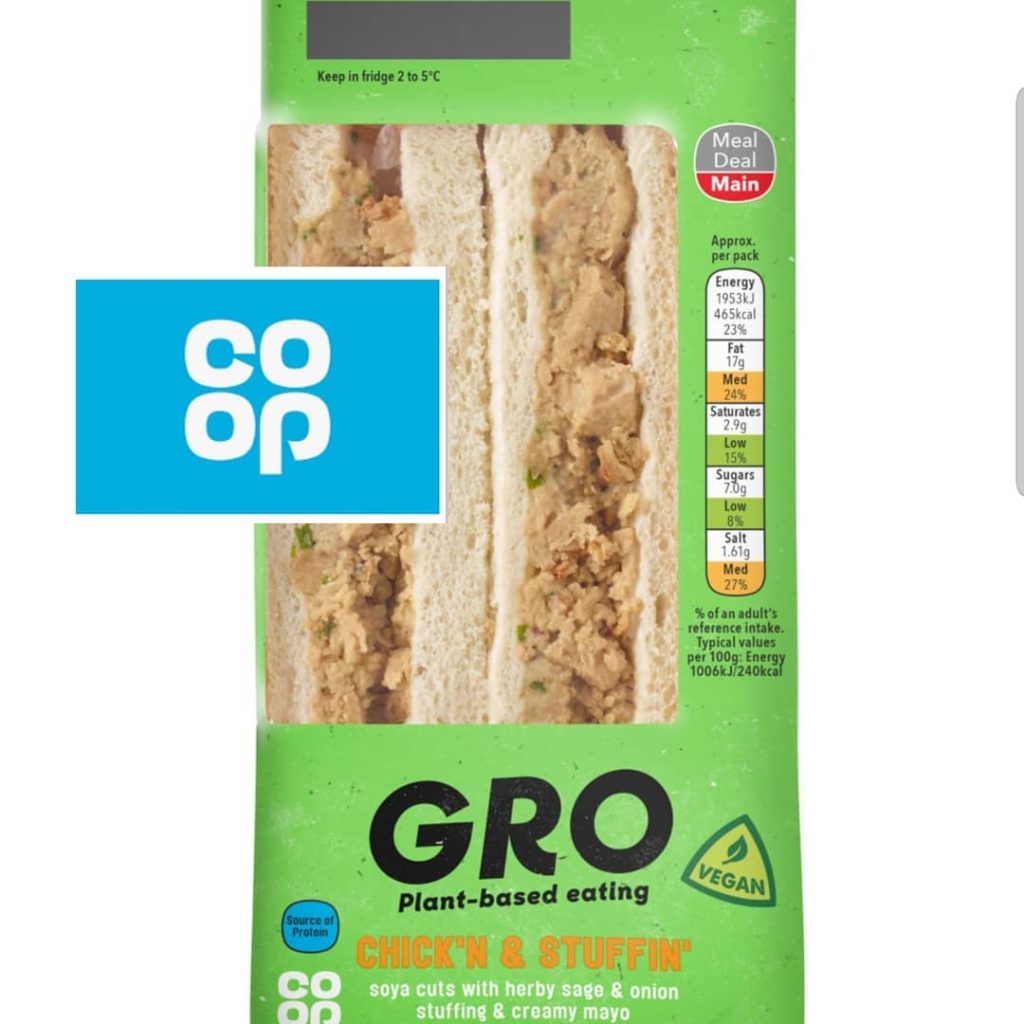 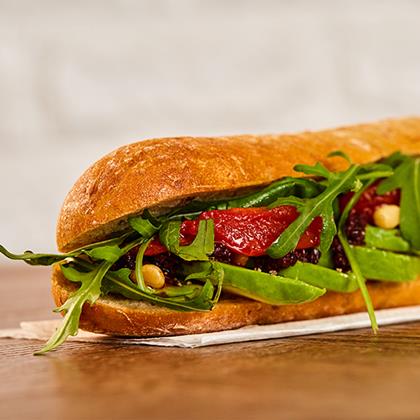 Pret A Manger has a handful of vegan options. 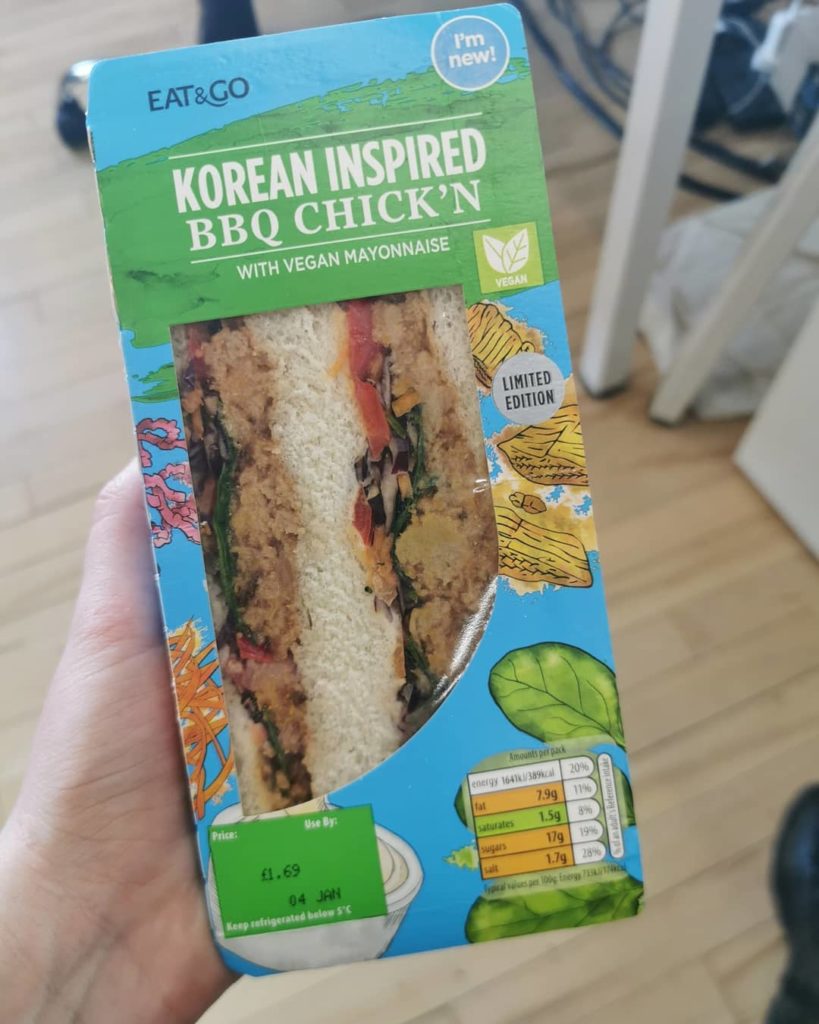 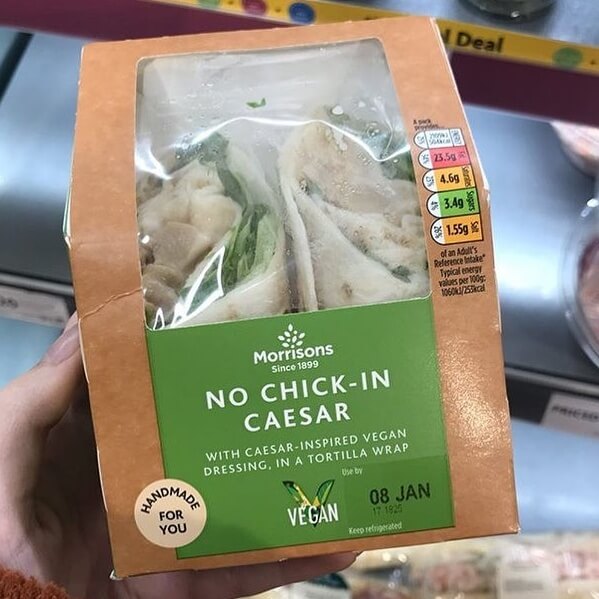 Morrisons has added a vegan caesar wrap to its shelves. | @isag0tchi

Morrisons has launched a new vegan No Chick-In Caesar wrap. According to the chain, the new grab-and-go option includes “caesar-inspired” vegan dressing. 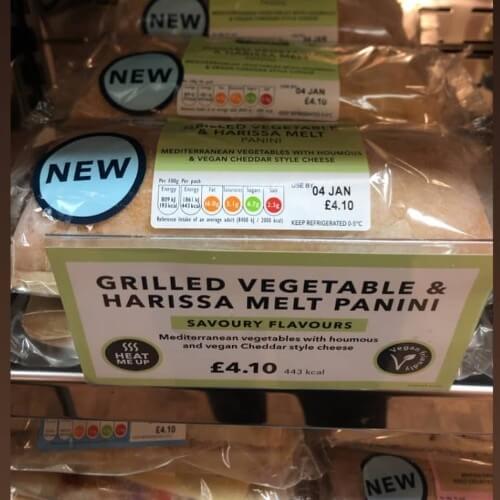 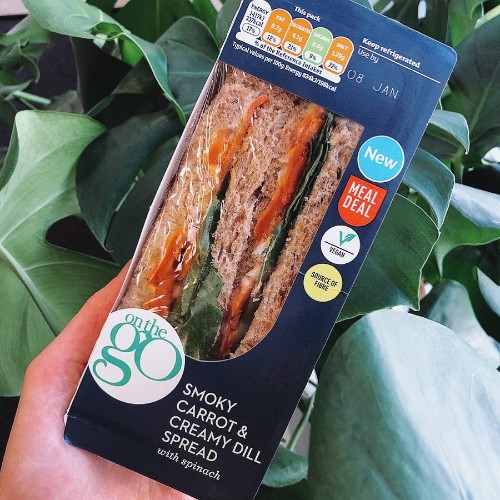 Sainsbury’s has launched its own vegan version of a smoked salmon sandwich. The Smoky Carrot & Creamy Dill Spread sandwich includes marinated carrots and spinach. It can be purchased as part of the supermarket’s meal deal. 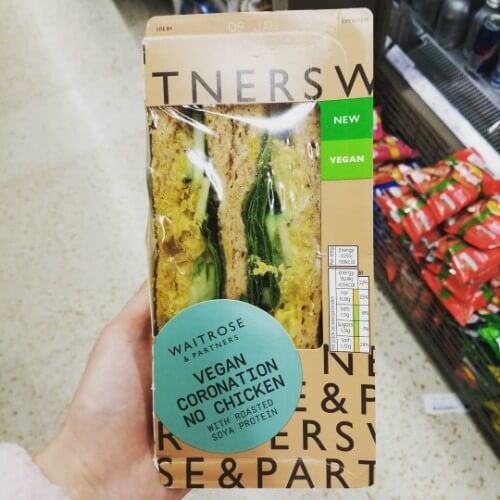 Waitrose has launched a new Vegan Coronation No Chicken sandwich, made with roasted soya protein. The supermarket chain recently announced it was doubling its vegan range for 2020. New products include a Meatless Feast pizza and Fishless Goujons.