More Brits than ever have sought out vegan and meat-free holiday food this holiday season, according to new data. The “UK Vegan Christmas Heatmap” was released by data provider SEMrush last week.

According to the heatmap, the Isle of Wight saw a 60 percent increase in searches — the biggest in the UK. It was closely followed by Derbyshire and Nottinghamshire, which saw increases of 58 percent and 57 percent respectively. Only Durham and two areas of Sussex saw decreases in searches, per My London. 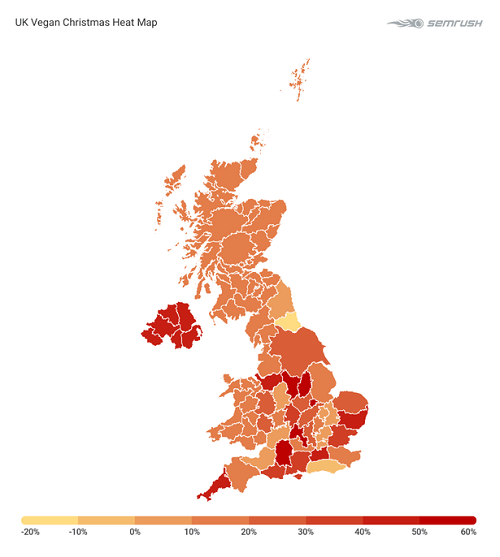 The map shows where searches for vegan Christmas food occurred.

Vegan Christmas Food in the UK

“Veganism has been big news in the UK this year – you only need to look at the response to Extinction Rebellion and Gregg’s vegan sausage roll launch – so sustainable meat was likely to influence this year’s Christmas celebrations,” Olga Andrienko, head of global Marketing at SEMrush, said in a statement.

Reasons for choosing a meat-free Christmas may be due to health, ethics, or sustainability. Research released by Humane Society International, an animal welfare nonprofit, revealed that traditional turkey feasts emit more than double the greenhouse gas emissions of a vegan holiday dinner. According to Mintel’s data, 31 percent of Brits said that reports on the environmental impact of meat make compelling arguments for eating less of it.

Andrienko added, “It’s great to see people in nearly every region in the UK are willing to add a vegan element to their Christmas menus.”