If you grew up in the 1990s, you might remember scoffing on Heinz Beanz Pizza in front of “The Simpsons” as a special Friday night treat. Tragically, the production of the pizza stopped back in 2003, according to one petition, and recently people have been asking for it back. Turns out, Heinz has listened. It’s coming back, and it’s coming back vegan.

In partnership with Deliveroo, America-based multinational company Heinz is celebrating its 150-year-anniversary with new versions of the Heinz Beanz Pizza. One version includes dairy cheese and sausages like the original, but another is completely vegan.

“The Heinz Beanz Pizza was an absolute 90s cult classic,” said Joe Groves of Deliveroo in a statement. “So we’re sprinkling a touch of magic and bringing it back into customers’ homes for 2019.”

Speaking to Vegan Food and Living, Fabio Megid Pinto, a spokesperson for Heinz, added, “We couldn’t be happier to be relaunching the iconic Heinz Beanz Pizza with Deliveroo for our 150th birthday!”

He continued, “We know there are some true fans of ours 90s frozen pizzas out there and — after a 16-year wait — hope they’re as happy today as we are to hear this absolute classic is available again, even for a limited time.” 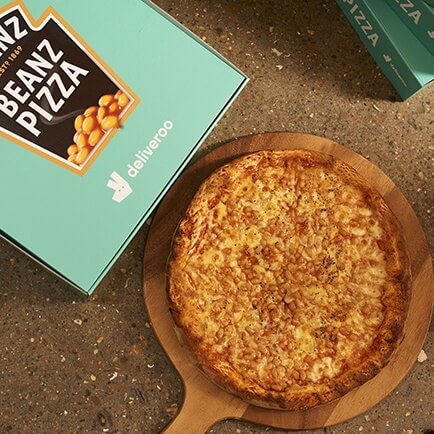 Brits love Heinz Beans. According to a recent study reported on in the Independent, it’s one of the most popular foods that homesick UK expats have shipped to them; nearly 6,000 tins were sent to the U.S. last year, while more than 2,000 were sent to Australia.

Brits are also increasingly looking for sustainable, plant-based foods, so Heinz’ vegan option could fly off the shelves.

According to a recent study by supermarket chain Sainsbury’s, 91 percent of Brits now identify as flexitarian. And another study, conducted by Kantar Worldpanel, reported that 66 million people living in the UK ate 150 million more meat-free meals last year.

Fraser McKevitt — head of retail and consumer insight at Kantar Worldpanel — said, “looking back on 2018 as a whole, one of the most notable consumer trends is the shift to a more plant-based diet.”

The Heinz Beanz vegan pizza will be available for a limited time only in select restaurants across the UK, including Joe Public in London and Pizza Punks in Glasgow, Newcastle, and Belfast. There are only 150 pizzas available per restaurant.