Helicopters dropped more than 2,200 kilos of veggies for wildlife stranded by Australian bushfires. Some experts have indicated that climate change has worsened the ongoing wildfires.

The carrots and sweet potatoes were provided by the New South Wales National Parks and Wildlife Services. “Operation Rock Wallaby” is specifically targeting the endangered marsupials. The region’s rock wallabies were already “at-risk” prior to the bushfires because of ongoing habitat destruction and drought.

“The provision of supplementary food is one of the key strategies we are deploying to promote the survival and recovery of endangered species like the Brush-tailed Rock-wallaby,” said Environment Minister Matt Kean in a statement.

“Initial fire assessments indicate the habitat of several important Brush-tailed Rock-wallaby populations was burnt in the recent bushfires,” continued Kean. “The wallabies typically survive the fire itself, but are then left stranded with limited natural food.”

The operation is the latest bid by governmental and environmental groups to preserve Australian wildlife in what was previously one of the most biodiverse habitats in the world. The World Wildlife Fund (WWF) estimates that 1.25 billion animals have died either directly or indirectly from the fires. 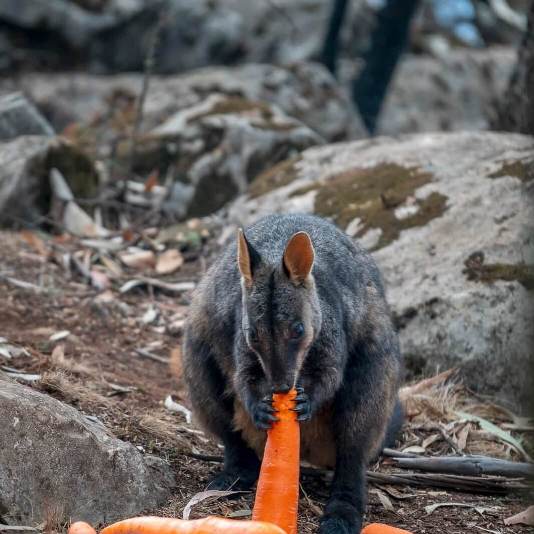 Rock Wallabies have been at-risk since before the wildfires. | Image/@Matt_KeanMP

Some experts have suggested that human-caused climate change is a factor in the ignition and severity of the Australian bushfires.

Climate change can cause extreme dry weather, powerful winds, and reduced rainfall. By lengthening the fire season, climate change has drastically increased bush fire risk and contributed to the endangerment of wildlife.

“There are many drivers of wildfires, but its increasingly clear that hotter, drier conditions play a big role in making them worse,” Tweeted Zeke Hausfather, a climate scientist at Berkeley Earth.

The extremity of the wildfires has even persuaded some climate skeptics, including Australian Prime Minister Scott Morrison. In an interview with the Australian Broadcasting Company, Morrison acknowledged the role of climate change in ongoing wildfires.

He said that climate change “has obviously impacted on the longer, hotter, drier, summer seasons.” Morrison has not announced any further, significant cuts to carbon emissions or restrictions on Australia’s energy sector.