The new vegan products have a realistic look, similar to the sausages and mince from American brand, Beyond Meat.

The new additions to Coles’ aisles were spotted by Michael Dodd, a member of the Facebook group Vegans in Australia. Coles has not yet released details on its new range. 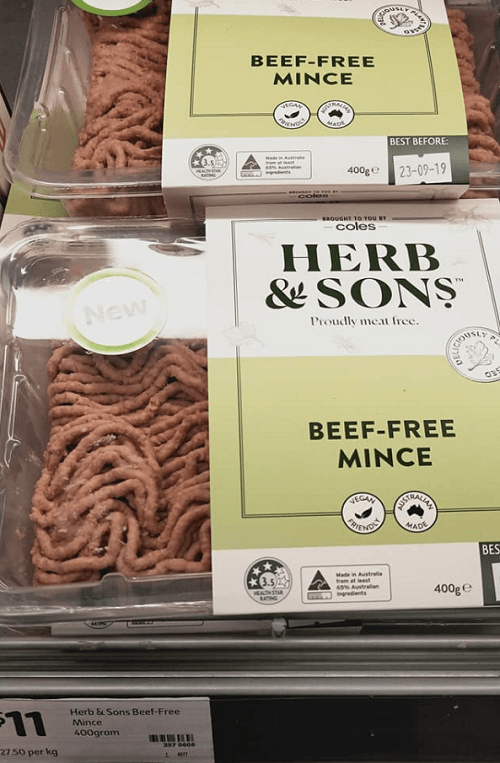 The Next Generation of Vegan Meat

Coles picked up the brand after it sold out at independent retailers. Didi Lo, CEO of Soulfresh, told Business Insider Australia that the brand represents a “fifth generation” of vegan meat. Lo said they used short vegetable fibers as an ingredient to create a “great textured replacement for meat.”

Another recent addition is The Alternative Meat Co., with burgers, sausages, and mince. While the Beyond Burger is made from pea protein, the new brand uses a blend of pea, soy, and wheat protein.

According to Coles, omnivores are driving its vegan meat sales. Caroline Bushnell, associate director of corporate engagement at the Good Food Institute, a nonprofit for the advancement of vegan and cell-based meat, says that this new, realistic type of plant-based meat appeals to a more conscious consumer.

“Consumer appetite for plant-based foods is surging as consumers increasingly make the switch to foods that match their changing values and desire for more sustainable options,” she said. “This growth will continue as more companies bring next-generation innovations to market that really deliver on the most important driver of consumer choice: taste.”

A recent report revealed that Australia’s vegan meat market generates $30 million in economic value each year. But, it has the potential to add $3 billion to the Australian economy by 2030 and create 6,000 new jobs.

Thomas King, CEO of Food Frontier, the think tank behind the study, said that the government and brands must work together to achieve this. He told Pro Bono News that the findings follow “a wave of new plant-based meat products, enabled by advances in food science and culinary creativity, that aim to mimic the sensory experience of eating conventional meat with fewer environmental and health impacts.”