Hits Radio presenter and entrepreneur Sarah-Jane Crawford has been a vegan for three years. She launched her plant-based recipe and restaurant finder app Viappi at the beginning of 2017.

Like countless others, the DJ is inspired by Beyoncé, who many consider as one of the most hardworking women in show business. However, it wasn’t her work ethic or vocal abilities that really caught Crawford’s attention, but the 21-day plant-based challenge the performer undertook for the first time back in 2015.

Speaking with LIVEKINDLY, Crawford recalled, “I was brainstorming ideas with my producer about fun things to chat about on my radio show, and we came across a news item where Beyoncé had said she’d done a 21-day plant-based diet challenge…so we thought I should give it a go for three weeks and share my journey with the listeners.”

The challenge brought JME onto the show, a grime MC and longstanding vegan. “[He] shared his reasons for giving up meat, and also brought in some vegan snacks and fast food to show me how easy the transition could potentially be,” she explained. She added that the artist had shown her a speech by the activist and lecturer Gary Yourofsky, titled “The Most Important Speech You’ll Ever Hear.” 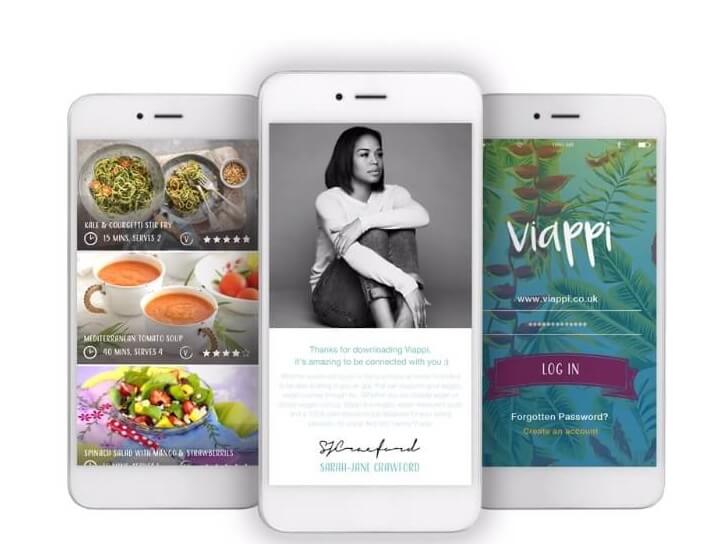 In the hour-long speech, Yourofsky compares animal agriculture to slavery, questions “humane” slaughter, and points out the hypocrisy of the industry. “It was the final motivator for [me],” said Crawford. “[I] never wanted to go back to eating meat and dairy.”

The star claims that going vegan opened her eyes not only to animal welfare issues, but also to a whole new restaurant scene. “I loved the creativity on the menus of these places and also the fact that you could very easily create recipes for meals you would think you’d long for if giving up meat and dairy, such as great burgers and amazing desserts,” she said. Wanting to share her newfound discoveries with others, and help inspire people to make the transition, the DJ launched Viappi.

“With Viappi, you can always find your nearest place to eat,” Crawford says. “I have the whole of the UK’s veggie and vegan restaurants on there.” One of the best restaurants on the app, according to the presenter, is Manchester-based V-Revs, where she often enjoys vegan loaded bacon and cheese fries, chicken and cheeseburgers, and plant-based milkshakes while recording her radio show.

To ensure her customers can create top-notch, satisfying, plant-based dishes at home, too, Crawford teamed up with a chef to put together a variety of recipes “for the sort of meals you’d be worried you’d miss out on,” including the surprisingly meaty lentil bolognese (her personal favorite), mac ‘n’ cheese, and chocolate cake.

Going vegan is easy, says Crawford (her only occasional challenge, she admits, is finding vegan leather trainers, but she always manages to overcome it). For those considering making the lifestyle change, the presenter says “Make it fun. Join Facebook groups, follow some vegans on Instagram and get some friends to join in your plans where they can.” Clearing out animal-based food items will also help, as well as shopping for new exciting staples and, of course, using the Viappi app for tips and tricks about where to go and what to make.

“I’m really proud of my transition [to veganism],” says Crawford. “Especially as I’ve combined it with sobriety and that’s been just over a year. The two lifestyles together feel amazing. The best part is knowing that with my diet, not only am I respecting myself but also the environment and the animals.”