The UK’s leading health and wellness retailer Holland & Barrett is increasing its vegan to-go offerings with the launch of a refrigerated section dedicated to quick meal solutions.

The health-focused chain operates more than 750 stores in the UK and more than 1,600 around the world. The chain, nearly 150 years old, has long been the region’s largest health and wellness retailer. In 2015, it opened “Holland & Barrett More,” which became the UK’s first-ever “free-from” concept store with a focus on vegetarian, vegan, and allergy-friendly foods.

And, like other major retailers in the UK and Europe, Holland & Barrett has been steadily increasing its vegan options. The chain recently added chocolate-covered vegan marshmallows ahead of the summer smores season. Last month it added vegan mince made from sunflower seeds to stores.

Instagrammer Rae Likes Froot spotted the new vegan to-go sections and shared to her feed. “You are spoiling us,” she wrote, tagging Holland & Barrett in a series of photos of the new sections.

In 2018, the chain announced plans to move toward launching a fully vegan store concept. Holland & Barrett chief executive Peter Aldis said the move was in response to the growing number of people opting for vegan options. 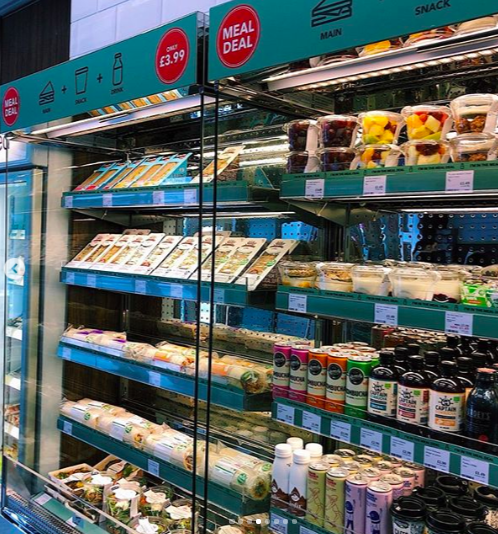 “It is our space and we should be in it”

“It is our space and we should be in it,” Aldis added, noting that it would give the chain a competitive edge over major grocery chains. “When you do something like that, it is an impossibility for a supermarket to follow.”

And the shift was also personal. Aldis said his wife recently shifted to a vegan diet and that piqued his own interest in moving the concept forward.

But it’s not likely a dedicated vegan Holland & Barrett can slow the competition. One of the hottest regions for vegan food, the UK’s top supermarkets are cashing in on the demand in a big way. Leading retailer Tesco has been spearheading the market shift after it brought on chef Derek Sarno to head up its plant-based innovation division. He developed the Wicked Healthy range of ready meals for Tesco and is behind the new Plant Chef meals set to launch later this year.