The Butchers Club, a traditional burger joint in Hong Kong, has recently brought on the Beyond Meat Beyond Burgers as part of its effort to expand vegan menu offerings. According to the company, 15 percent of total sales come from the new vegan options.

Launched in 2013 as a private dining club centered around premium meats in Tim Wan, Aberdeen, The Butchers Club has been recognized locally and internationally for the quality of its steak and burgers. The Butchers Club Burger Founder and Head Chef, Jonathan Glover, said in a press release, “We are very excited to introduce yet another vegan option to our customers and are thrilled to collaborate with Beyond Meat once again.”

The first vegan burger, the “Beyond Classic,” is a play on the Hong Kong burger brand’s “The Classic,” a Michelin-listed dry-aged beef and bacon cheeseburger. The vegan version is comprised of a vegan Beyond Burger patty, vegan cheese, pickled beet chips, tomato, dill pickles, and signature burger sauce made with vegan mayonnaise and caramelized onions sandwiched between two grilled vegan scotch baps.

“Beyond Wu Tang-Style,” one of the newest additions to the menu, is a rendition of The Butchers Club Burger customer favorite, the “Wu Tang-Style.” This burger boasts a vegan Beyond Meat patty fried in Sriracha and paired with Just Mayo, vegan kimchi, Daiya vegan cheese, tempura sweet potato, and tomato served between two grilled vegan scotch baps. 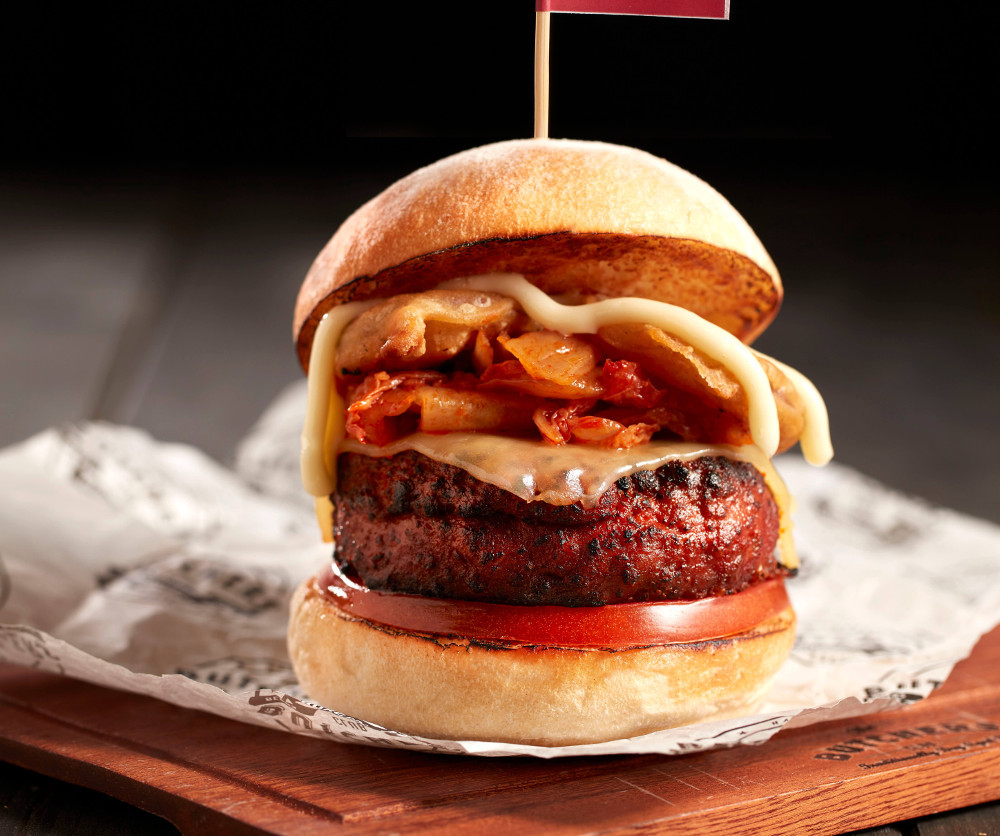 “The Beyond Wu Tang-Style burger is a great vegan alternative to the original Wu-Tang Style, but delivers all of the original’s beloved flavors,” said Glover.

While The Butchers Club has a heavy emphasis on its specialty dry-aged meat, it sees a plant-based product like the Beyond Burger as no different from working with traditional meat. “The Beyond Burger is a great alternative to beef,” Glover said. “There’s a great deal of hype about this burger with numerous high profile people involved; Bill Gates to name one of many, and having worked with the product, I can see why so many great minds are rallying behind it. We’re excited to join them!”

The boosted sales, sparked by the introduction of more vegan options, is a nod to the evolving vegan market in Asia. The market is shifting away from traditional Buddhist plant-based foods and is welcoming a new wave of innovative vegan options. The Hong Kong-based Green Monday campaign was formed to raise awareness about plant-based eating in Asia and within a few years, has already encouraged more than 1.6 million people in Hong Kong to reduce their meat consumption.