You can now get meat-free wings at 318 Hooters restaurants across the country. The restaurant chain is serving Unreal Wings made by Quorn nationwide.

The new Unreal Wings are fried, then tossed in any of Hooters’ 14 classic sauces and dry rubs. They are made from Quorn’s signature mycoprotein, a plant-based protein derived from fungi. Quorn’s boneless wings are low in saturated fat and contain no cholesterol. The wings are vegetarian due to the inclusion of egg whites, nonfat milk, and dried whole eggs.

“We’re excited to build upon our heritage of offering the broadest variety of wings under one roof by being the first to bring great tasting meatless wings to our guests,” Carl Sweat, Chief Marketing Officer of Hooters of America, said in a statement. 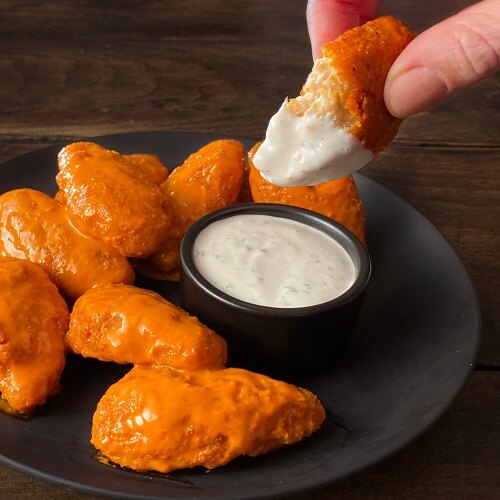 He continued, “we were able to create the taste, texture, and crispiness of our world-famous chicken wings perfectly.

“Similar to our launch of smoked wings and roasted wings with half the calories of our regular wings, the Unreal wings provide our guests a healthier option without compromising on the full Hooters Wing flavor they know and love.”

Last May, LIVEKINDLY speculated that Hooters may have been preparing to add vegan burgers to the menu. The sports bar’s parent company, Chanticleer Holdings Inc., had announced a partnership with California-based vegan protein brand, Beyond Meat.

“The rise of meatless options, especially at quick service and fast-casual restaurants, has largely centered on burgers, and we’re excited to partner with Hooters to roll out the first meatless poultry item on a national scale in the US,” said Kevin Brennan, Chief Executive Officer of Quorn Foods.

Hooters may have been the first to launch meatless chicken on a national scale, but KFC may not be far behind. Last August, the fast-food chain trialed vegan chicken made by Beyond Meat for one day at its Cobb Parkway location in Atlanta. The Beyond Meat fried chicken sold out within five hours. A store in Ontario, Canada, tried vegan fried chicken made by Maple Leaf Foods-owned brand Lightlife for a day and sold out in six hours. Stores in the UK launched vegan chicken on January 2.

Quorn vegetarian wings are now available at 318 Hooters restaurants across the country.