A fish and chip shop is going vegan after its owners had an “eye-opening” experience.

The owners of The Fish & The Chip in Leicester, England, took to social media in May to announce that they were closing up. Their reason? “There’s Not Plenty More Fish in the Sea.”

Following a fishing trip in April, they wrote: “After our trip away we saw the impact pollution is having on the oceans and fish stocks and we are not comfortable running a restaurant that has such an impact on our environment.”

They added that their holiday made them realize that a seafood-centered restaurant was no longer their passion. “But don’t worry,” they continued. “We are still committed to creating gluten-free, plant-based food and are really excited to share our new range very soon.” 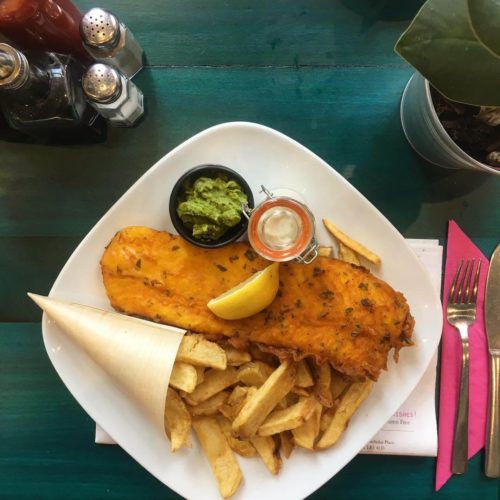 The Fish & The Chip is working on a vegan range | image: thefishandthechip/Instagram

Overfishing and the Environment

Overfishing has had a devastating effect on marine life. According to the Food and Agriculture Organization of the UN, nearly 90 percent of the world’s fish stocks are fully or overexploited. A 2006 study from Dalhousie University in Halifax estimated that salt water fisheries may collapse as soon as 2048. This could have a devastating impact not only on sea life but the entire planet.

Ocean life plays an important role in ecosystems, protecting shorelines from flooding and keeping toxic red algae blooms — which are linked to animal agriculture, according to the EPA — in check. As for plastic pollution, a recent study found that fishing nets make up the majority.

As well as environmental issues, eating fish also brings up ethical problems for some people.

For decades, people have debated whether fish feel pain. Many members of the scientific community maintain that they do, albeit perhaps not in the exact same way as humans do. This concept is starting to become more universally accepted, according to biologist Lynn Sneddon.

She told Smithsonian, “Back in 2003, when I gave talks, I would ask, ‘who believes fish can feel pain?’ Just one or two hands would go up. Now you ask the room and pretty much everyone puts their hands up.”

The Fish & The Chip isn’t the only eatery to opt for a more sustainable, ethical menu.

Family-run restaurant Sutton & Sons re-opened its Hackney location in London with a completely vegan menu last September. Its signature dish consists of banana blossom battered and fried, served with a side of chips. Last October, a completely plant-based fish and chip shop, Veg’n Out, opened in Kent.

The Fish & The Chip has not announced when it will re-open.