Bill Gates is a man who needs little introduction. And his love for investing in vegan food and tech is almost as well-known as he is these days.

While not vegan personally, Gates has on multiple occasions spoken to the importance of reducing meat consumption and plant-based protein – including in a 2013 interview with “The Omnivore’s Dilemma” and “How to Change Your Mind” author Michael Pollan. The tech mogul has done his fair share in making the world a more compassionate place.

The founder of the global Microsoft empire, the tech entrepreneur and his wife, Melinda, launched the Bill & Melinda Gates Foundation in 2000. Reported to be the largest private foundation in the world, the charity has supported efforts to increase access to nutrition, education, healthcare, and technology across the globe.

In their most recent annual letter, the Gates’ highlighted some stories from 2018 that took them by surprise. On the realization that the world’s building stock is set to double by 2060, the equivalent of building a new NYC every both, Gates wrote, “I wish more people fully understood what it will take to stop climate change.”

In a video, he explained that it’s not as easy as just switching to clean energy – all sectors, including agriculture, need to evolve. “Part of the solution is to invest in innovation in all five sectors so we can do these things without destroying the climate. We need breakthrough inventions in each of the grand challenges,” he said.

1. Investing in Beyond Meat 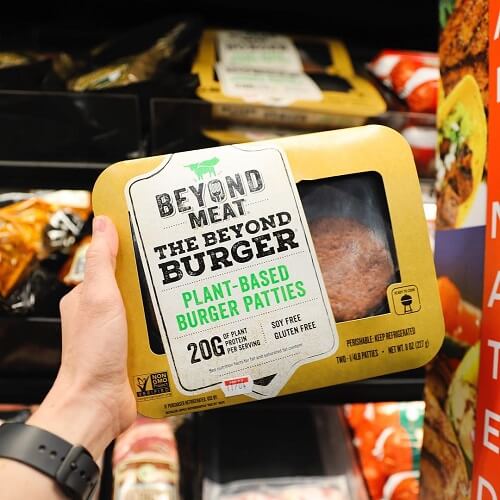 This Is How Bill Gates Is Making the World Vegan

Gates has long acknowledged meat’s environmental consequences. The Microsoft founder ruminated over the ethical dilemma of hamburgers in a 2015 blog post titled “Should We Eat Meat?”

There, he wrote that while one of his foundation’s efforts involves making meat, dairy, and eggs accessible to impoverished parts of the world, it comes with a big problem: “Raising animals can take a big toll on the environment. You have to feed the animal far more calories than you extract when you eat it. It’s especially problematic as we convert large swaths of land from crops that feed people to crops that feed cows and pigs.”

Gates added that clearing out large parts of forests to make room for farmland contributes to climate change, as does raising the animals themselves. Although the 63-year-old believes that it is unrealistic for the world to shift to a completely plant-based diet, he is aware that a meat-heavy diet is unsustainable. With the global population expected to reach 9.6 billion by 2050, according to UN data, Gates has said there is a need for both “moderation” and “innovation.” It’s his concern for the environment that led him to invest in sustainable brands like Beyond Meat.

Gates invested in the California-based Beyond Meat in 2013 after trying its plant-based chicken tacos. “Like most people, I don’t think I can be easily fooled. But that’s just what happened when I was asked to taste a chicken taco and tell whether the meat inside was real or fake,” wrote in a blog post. “…What I was experiencing was more than a clever meat substitute. It was a taste of the future of food.”

Since the investment, Beyond Meat has gone on to create the Beyond Burger, a realistic plant-based patty made from pea protein with a 93 percent meat-eating customer base. Its success led to it landing in 35,000 stores and restaurants across the globe, including major chains like A&W Canada and Carl’s Jr. The company followed up with other realistic vegan meats like the Beyond Sausage and the upcoming ground beef analog, Beyond Beef. Vegan Beyond bacon and steak are on the horizon. 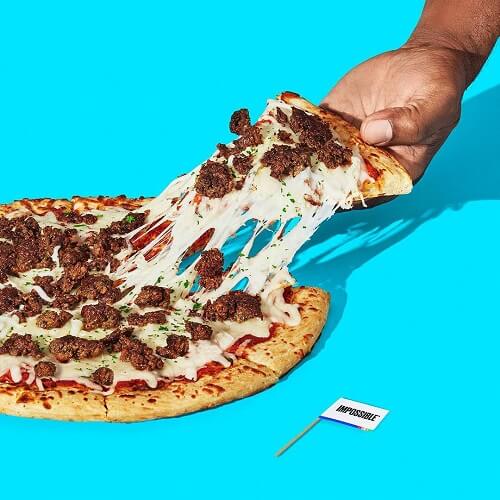 Gates is also a backer of Beyond Meat competitor Impossible Foods, makers of the plant-based Impossible Burger. Gates was one of several high-profile moguls to back the California-based company with a $75 million investment in August 2017.

The plant-based patty, originally formulated with wheat and potato protein plus heme – the iron-rich compound that gives the Impossible Burger its realistic flavor – rolled out into high-end restaurants first. Last September, the meatless meat landed in fast-food chain White Castle after a successful test run at select locations. At the Consumer Electronics Show in Las Vegas earlier this year, the company unveiled the soy protein-based Impossible Burger 2.0., which is due to make its retail debut later this year. 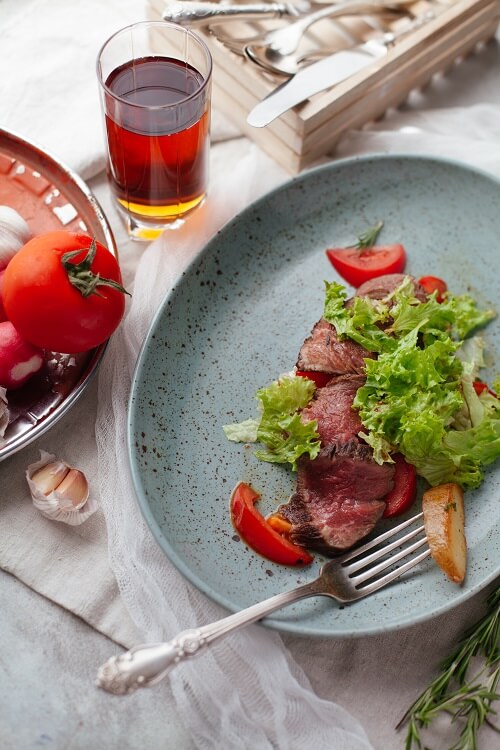 Gates wasn’t finished with plant-based protein after investing in both Beyond Meat and Impossible Foods. In February, the tech entrepreneur, Jeff Bezos, and Richard Branson led a $90 million investment in the startup Motif Ingredients, an offshoot of tech firm Ginkgo Bioworks.

The new company will work with Ginkgo to identify vitamins and proteins found in milk or meat. From there, the ingredients will be bioengineered with yeasts and bacteria via a fermentation process similar to beer. The end goal is to make ingredients that can be used to perfect vegan meat, dairy, and eggs.

The ingredients may also be used to make clean meat – slaughter-free meat grown from real animal cells – in which Gates is also a believer. The eco-conscious entrepreneur is an investor in the startup Memphis Meats.

“There’s a clear trend of consumer interest in alternate proteins and animal-free versions of fish and burgers and chicken nuggets and all of these things,” Jason Kelly, Gingko CEO and co-founder, told Fast Company. “And these companies are kind of being asked to do this impossible thing, which was like, hey, build a brand, develop a new product, and while you’re at it, why don’t you boot up a biotech R&D team to make some of these key protein ingredients that you’re going to need to actually make these things.”

Driven to create a more sustainable future of food, the Bill & Melinda Gates Foundation backed Santa Barbara-based tech startup Apeel Sciences last June. The company created an organic, invisible, safe spray made from discarded plant-based materials that help avocados last up to twice as long. The liquid shields produce from gases that cause fruit to ripen.

“Refrigeration has been used to increase produce quality during transportation and storage, but you lose the benefit of refrigeration when a fruit sits on a grocery store shelf or on a kitchen counter. With our technology, we’re able to dramatically reduce the rate that clock is ticking,” CEO James Rogers explained.

Apeel avocados are available in Costco, Kroger, and midwestern grocery chains and the company has partnerships with farms in both Nigeria and Kenya. It has also developed sprays for other fresh produce like nectarines, peaches, lemons, pears, and asparagus.

The ultimate goal is to deter rising food costs and fight food waste, which contributes to climate change.

Along with Melinda, much of Gates’ work through his foundation is connected to humanitarian efforts. The Bill & Melinda Gates Foundation stands by the ethos that “all lives have equal value,” noting that the couple are “impatient optimists working to reduce inequality.”

Gates’ investments in Apeel Sciences not only fights food waste, but may very well connect impoverished nations to longer-lasting produce.

Last September, the Gates sat down for an interview with National Geographic editor-in-chef Susan Goldberg about how they hope to improve access to nutritious food, education, and healthcare in African countries.

“Today more than half the kids in Africa never fully develop physically or mentally because of malnutrition, their diet, and the diseases they face,” he said. “I’m super excited that by the end of the decade we expect to have cheap interventions so those kids will fully develop. That means all the investments you make in their education, wanting to benefit from their productivity, will work far better. So if there was just one thing, it’s the intervention to stop malnutrition.”

Last October, Gates, former United Nations Secretary-General Ban Ki-moon, and World Bank CEO Kristalina Georgieva launched the Global Commission on Adaptation in order to lessen the damage of climate change. The effects of global warming could very well push 100 million people into extreme poverty by 2030, according to The World Bank. The group will work to find solutions that can curb global warming and will present a plan at the UN climate summit this year, National Geographic reports.

“We are at a moment of high risk and great promise. We need policies to help vulnerable populations adapt and we need to ensure that governments … are … supporting innovation and helping deliver those breakthroughs to … places that need them the most,” Gates said in a statement.

Through the Bill & Melinda Gates Foundation, the powerhouse couple has taken on a multitude of issues. It has helped people in developing nations gain access to education and healthcare and given poor communities in the US the resources needed to succeed in school. It has also helped farmers learn how to increase production in a sustainable way, improved women’s health and access to birth control in communities, and is working to fight infectious disease.

The foundation has worked with researchers to eradicate polio and malaria and has provided life-saving vaccines to areas of the world that need it the most. It also aims to accelerate HIV treatment and prevention, extending the life of those living with the auto-immune disorder.