Where do vegans get their iron? Along with calcium, vitamin B12, vitamin D, and omega-3 fatty acids, experts say anyone following a plant-based diet needs to pay attention to their iron intake.

What Does Iron Do?

First, what does iron actually do?

Iron is essential to some of the most important bodily functions. According to the University of California San Francisco Health, it is essential for blood production. The mineral is a central component of hemoglobin, or the substance in red blood cells that transports oxygen from your lungs throughout your body. About 70 percent of the body’s iron is found in hemoglobin. It is also found in muscle cells called myoglobin, which accepts, stores, transports, and releases oxygen

Iron also plays a role in certain proteins essential for respiration and energy metabolism, enzymes involved in the synthesis of collagen and neurotransmitters, and it is an important part of proper immune function.

How Much Iron Do You Need on a Plant-Based Diet?

The daily Recommended Dietary Allowance (RDA) for iron will vary from person to person, according to The National Institutes of Health (NIH). It notes that vegans and vegetarians require an average of 1.8 times the RDA of iron. Consuming vitamin C-rich foods can help boost iron absorption by up to 300 percent.

Iron deficiency is extremely common regardless of diet, despite the belief that you need meat to get iron.

Those susceptible to iron deficiency include pregnant people, people who have heavy menstrual bleeding, cancer patients, frequent blood donors, those who have gastrointestinal disorders or who have had gastrointestinal surgery, people with heart failure, and athletes. Research has shown that those who engage in regular, intense exercise may require 30-70 percent more iron than the average person.

According to a July 2013 study published in the journal Cold Spring Harbor Perspectives in Medicine, iron deficiency is the most prevalent cause of anemia. 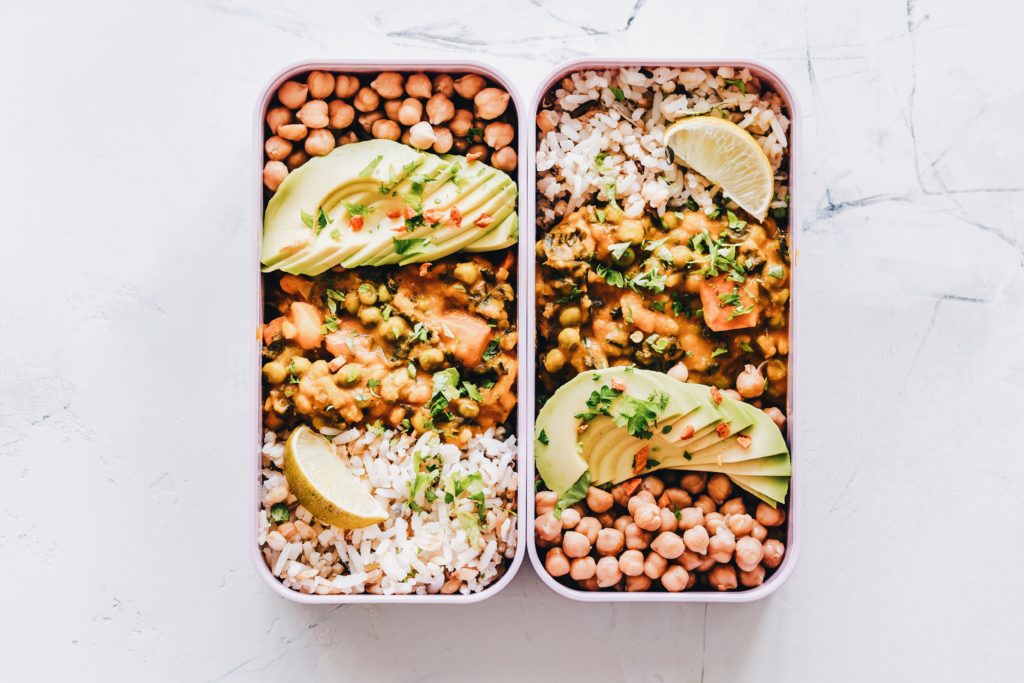 There are many iron-rich plant-based foods to choose from. | Ella Olsson via Pexels

The Best Plant-Based Sources of Iron

Multiple expert sources cite meat and seafood, including lean beef, veal, lamb, fish, and shellfish as being important sources of iron, leading to the belief that anyone following a plant-based diet may be more prone to a deficiency. But that’s not the case. Here are some of the most iron-rich plant-based foods.

Beans, Lentils, and Other Legumes

Legumes including beans, lentils, and peas are good sources of iron.

Beans: Leading the way with iron content are chickpeas and black-eyed peas, which contain 4.6–5.2 mg per cup (cooked)–up to 29 percent of the RDI. But any bean is a good source of iron. This includes soybeans, but more on that in the next section.

Lentils: These protein-rich pulses provide about 6.6 mg of iron per cup, 37 percent of the RDI.

Peas: The split kind, not the fresh kind. Split peas contain about 2.5 mg of iron per cooked cup.

Soy has been a staple food in East Asia for centuries. And despite some myths, it’s a good source of iron (and protein).

Tofu: A six-ounce serving of tofu delivers about 20 percent of the RDI. Try it in these recipes.

Tempeh: A fermented soy-based food hailing from Indonesia. Like tempeh, six ounces of tempeh contains 20 percent of the RDI.

Soybeans and nattō: A cup of Plain soybeans contains 18 mg of iron, 83 percent of the RDI. You’ll find the same amount in nattō, a Japanese soy food made from fermented foods with a unique sticky, stringy texture usually consumed as a breakfast food. 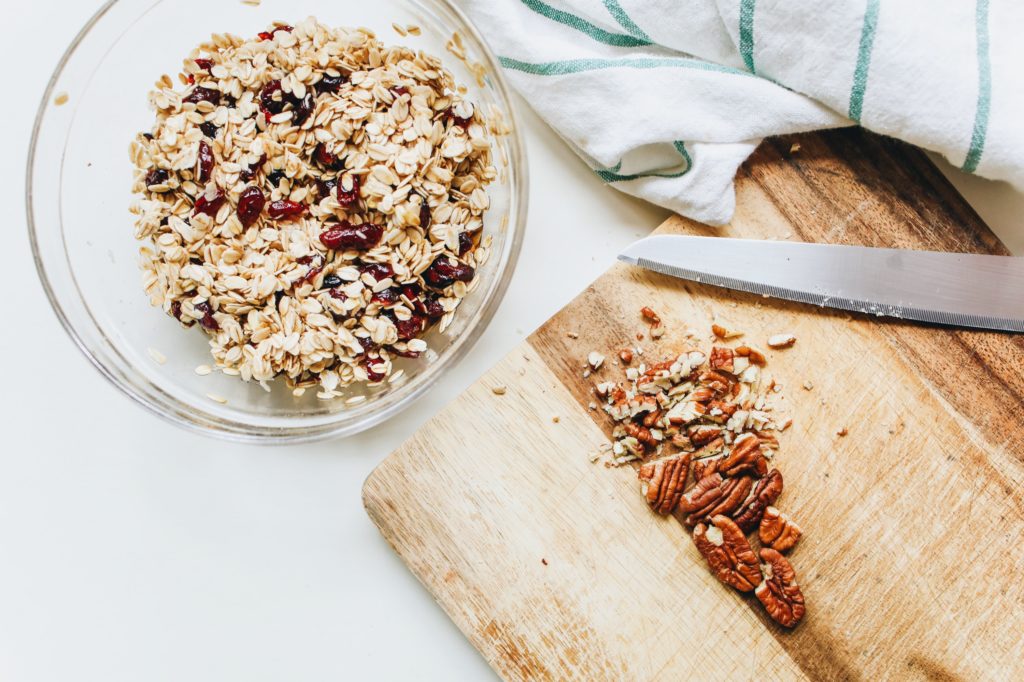 Raw nuts and seeds can help add iron to your diet. | Polina Tankilevitch via Pexels

Eating a variety of raw nuts and seeds can help add iron to your diet as well.

Pumpkin seeds: An ounce of raw pumpkin seeds contains 4.2 mg of iron, 20 percent of the RDI. It also contains 22 grams of plant-based protein.

Sesame seeds: Two tablespoons of tahini contains .8 mg of iron, 4 percent of the RDI of iron. Hummus, anyone? You can also use it to make dressing for salads and bowls.

Flax seeds: A tablespoon of ground flax seeds delivers .4 mg of iron, about 3 percent of the RDI. Add them to oats and smoothies (they also make a great vegan egg substitute for baking).

Raw nuts: Cashews, almonds, pine nuts, and macadamia nuts have the highest iron content among nuts, containing between 6-9 percent of the RDI. Cashews are great for making dairy-free cheese sauce and pine nuts make for a great vegan pesto.

Leafy greens: Take your pick from spinach, chard, collards, and kale—they contain between 14-36 percent of the RDI per cooked cup. Try them in these saag aloo curry recipes. It can be made with spinach or other leafy greens.

Heart of palm: This tropical vegetable is harvesting from the core of certain palm trees. A cup contains 4.6 mg of iron, 26 percent of the RDI, plus it’s rich in fiber and vitamin C. Use it to make vegan seafood dishes like crab cakes and fish and chips. 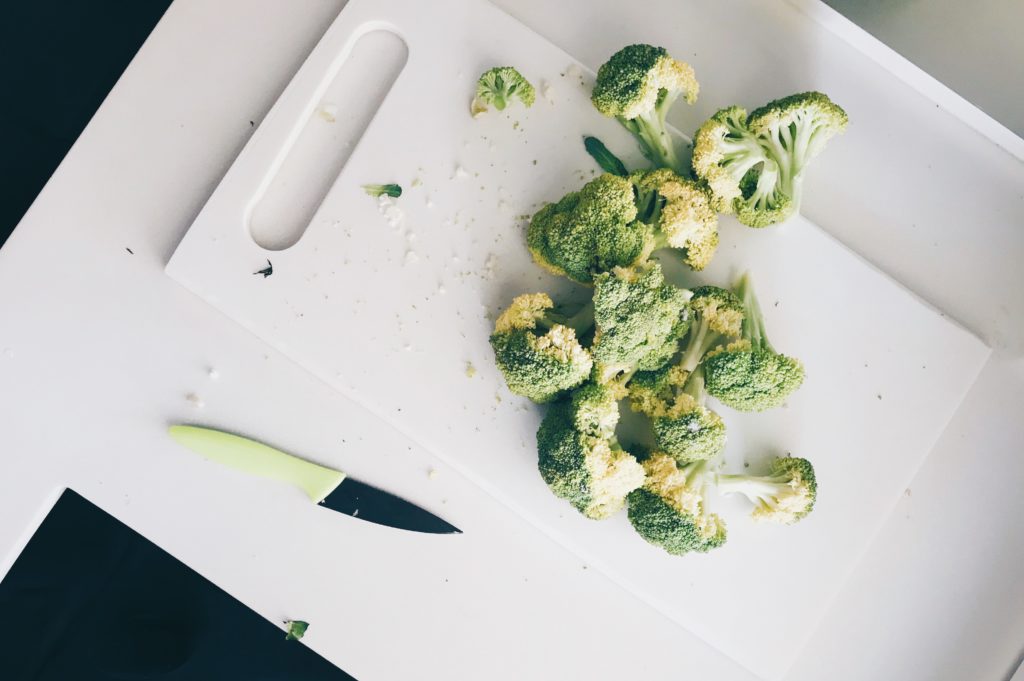 Vegetables like broccoli and Brussels sprouts are an excellent source of iron. | Amir Hanna via Unsplash

As if there weren’t already enough reasons to love potatoes. One large potato contains about 3.2 mg of iron, 18 percent of the RDI. Sweet potatoes also contain a fair amount, providing 12 percent of the RDI. Just remember to leave the skin on—that’s where most of the iron content is. Potatoes are also a good source of vitamin C, which helps with iron absorption. To quote Samwise Gamgee: “Boil ‘em, mash ‘em, stick ‘em in a stew.”

Mushrooms are a good source of iron, depending on the variety. A cup of cooked white button mushrooms contains about 2.7 mg of iron, 15 percent of the RDI whereas a large oyster mushroom contains 11 percent. Portobellos and shiitake mushrooms don’t contain that much iron.

Seek out whole grains rather than white, enriched grains. Not only do whole grains contain more heart-healthy fiber, but they’re also a good source of iron.

Oats: Budget-friendly and versatile, a cup of cooked oats contains 3.4 mg of iron, 19 percent of the RDI.

Spelt: A variety of wheat, spelt has been cultivated for thousands of years. A cooked cup of this ancient grain contains 3.2 mg of iron, 18 percent of the RDI. Serve it like rice.

Quinoa: Technically a seed, quinoa is part of a family of ancient grains called pseudocereals. A cup of cooked quinoa contains 2.8 mg of iron, 15 percent of the RDI of iron. It’s also a good source of fiber and protein.

Amaranth: This ancient grain was a staple food of the Aztecs. A cooked cup contains 5.2 mg of iron, 29 percent of the RDI. A cup also contains 9.3 grains of protein.

A cup of dried prunes contains 1.6 mg of iron, 9 percent of the RDI. Prunes are also a good source of potassium, copper, manganese, and fiber.

Technically a fruit, an ounce of black olives contains .9 mg of iron, 5 percent of the RDI. They also contain small amounts of copper, vitamin A, and vitamin E.

Perfect for homemade sauces and thickening stews, an ounce of tomato paste contains .8 mg of iron, 5 percent of the RDI.

Dark chocolate is well-known for its antioxidant content, but it’s also a good source of iron. One ounce contains 3.3 mg, or around 18 percent of the RDI.

It may seem like the best sources of iron come from meat, but that couldn’t be further from the truth. There are plenty of ways to get iron on a plant-based diet—just remember to regularly get your iron levels checked by a doctor.