Updated January 13, 2021 | Whether you’re a newbie vegan or have been plant-based for a while, you may be wondering if you’re getting all the right vitamins and minerals. While many stress the importance of omegas and vitamin B-12, there’s one essential nutrient you may be missing out on: vitamin D.

According to the experts, it’s entirely possible to get enough vitamin D on a plant-based diet if you are conscious of your lifestyle and the food you eat.

We’ve put together a comprehensive guide on vitamin D to answer your burning questions. From why you need it, to how much you need, to where you can get it from: Here’s everything you need to know about vitamin D.

Why Do You Need Vitamin D?

Vitamin D helps you to absorb calcium, magnesium, and phosphate, the nutrients that keep your bones, teeth, and muscles healthy.

It also plays a role in regulating the immune system. According to a 2011 study published in the “Journal of Investigative Medicine,” “deficiency in vitamin D is associated with increased autoimmunity as well as an increased susceptibility to infection.” The study suggests that supplementing vitamin D could benefit those who are deficient.

With COVID-19 infections still on the rise, it’s logical to ask if vitamin D can help protect your immune system against it. A meta-analysis suggests that low vitamin D levels could increase the risk or severity of COVID-19 infection. But, there is no conclusive evidence because the virus is still so new. The U.S. Department of Justice even ordered a Georgia company that touted its vitamin D products as a treatment for COVID-19 to stop, all because of unsubstantiated claims.

How Much Vitamin D Do You Need?

How much vitamin D you need depends on age. Babies need around eight and a half to ten micrograms per day. Whereas adults and children from the age of one need ten micrograms each day, according to the NHS.

What Happens if You Don’t Get Enough Vitamin D?

According to the NHS, one in five people in the UK suffers from low vitamin D levels, which can cause fatigue, depression, and muscle pain, amongst other symptoms. However, having low levels of vitamin D is not the same as being completely deficient, which is more serious.

If children do not get enough vitamin D they can develop rickets, a painful bone disorder. Children who suffer from the condition may have weak bones, stunted growth, or even deformities.

Healthline notes that a vitamin D deficiency can make it difficult for your body to maintain adequate levels of phosphate and calcium. When this happens, your body produces hormones that release these nutrients from your bones. Without these minerals, your bones can become weak and soft.

Rickets is most common in children aged between 6 and 36 months of age. Symptoms include low mood, digestive problems, and bowed legs when they begin to walk. Rickets was much more common during the industrial revolution. However, according to Avogel it’s on the rise again. Children now spend more time playing inside, away from the sun, than outside.

For adults, vitamin D deficiency can cause the softening of the bones, or osteomalacia. It is similar to rickets and can be treated with supplements, according to the NHS. Symptoms include partial bone fractures, muscle weakness, and general pain felt in the bones.

Is it Possible to Get Enough Vitamin D on a Vegan Diet?

Not everyone shares Brigham’s view. Chirag Shah MD, the co-founder of Accesa Labs, which offers vitamin D testing, maintains it is possible to get enough Vitamin D on a plant-based diet—if you eat enough mushrooms.

Shah explained to LIVEKINDLY, “Mushrooms are thought to make vitamin D from a molecule called provitamin D2 with the help of the sun.” She added, however, that “people who are interested in tracking their vitamin D levels should consider getting a vitamin D blood test before adding some mushrooms to their diet.”

David Barbour, the co-founder of wellness company Vivio Life Sciences, agrees with Shah. “There are two main versions of vitamin D; D2 and D3 is in animals. Living on a plant-based diet you should you eat mushrooms (UV light exposed mushrooms), fortified foods, and/or supplements,” Barbour said.

Can You Take Too Much Vitamin D?

A deficiency in vitamin D can negatively impact your health, but taking too much can be bad for your body too. According to Healthline, if you take too much vitamin D, this can cause some harmful side effects.

Overcompensating and taking too many supplements could cause intoxication, Healthline states. It explains, “Vitamin D intoxication occurs when blood levels rise above 150 ng/ml (375 nmol/l). Because the vitamin is stored in body fat and released into the bloodstream slowly, the effects of toxicity may last for several months after you stop taking supplements.”

One potential side effect of too much vitamin D is elevated calcium levels in the blood. This could cause you to suffer from a variety of unpleasant symptoms. These include stomach pain, nausea, or excessive thirst.

Further, taking enough vitamin D is essential for bone health, but taking too much could be detrimental to your bones. According to Healthline, high levels could interfere with vitamin K2 activity and even cause bone loss.

Taking too much vitamin D is something you need to be aware of. But it is worth noting that it is extremely rare to suffer from vitamin D intoxication. If you manage your meals and lifestyle well, it is perfectly possible to get just the right amount of vitamin D from a vegan diet.

According to NutritionFacts.org founder Dr. Michael Greger, vitamin D may also reduce cancer-related deaths. “Higher blood levels of vitamin D were associated with lower mortality of patients with colorectal cancer,” he wrote on his website noting the mortality rate dropped by nearly half. “And, the higher the vitamin D levels, the lower the death rate appeared to fall.”

“Researchers suggest getting blood levels up to at least about 75 nanomoles per liter,” he says. “These levels are not reached by as many as three-quarters of women with breast cancer nor achieved by a striking 97 percent of colon cancer patients.”

“Getting up to these kinds of levels—75 or, perhaps even better, 100 nanomoles—might require about 2000 to 4000 IU of vitamin D a day, levels of intake for which there appear to be no credible evidence of harm. Regardless of what the exact level is, the findings of these kinds of studies may have a profound influence on future cancer treatment.”

Portobello, maitake, morel, button, and shiitake are thought to be the best kinds of mushrooms to source vitamin D from. To maximize the amount of vitamin D they contain, you could even place them in sunlight. According to mushroom business Fungi Perfecti, just like our skin, even sliced or dry mushrooms will soar in vitamin D levels when placed in direct sunlight.

The business even conducted an experiment on their own mushrooms to prove the theory. They used three sets of mushrooms in the test. Researchers grew and dried the first set inside. They dried the second set outside with their gills facing down away from the sun. They dried the third set of mushrooms outside for two days, for six hours a day with gills facing up. The final set contained the most vitamin D. It soared from 100 IU per 100 grams, to nearly 46,000 IU per 100 grams. When tested a year after the exposure, they still contained significant levels of vitamin D. 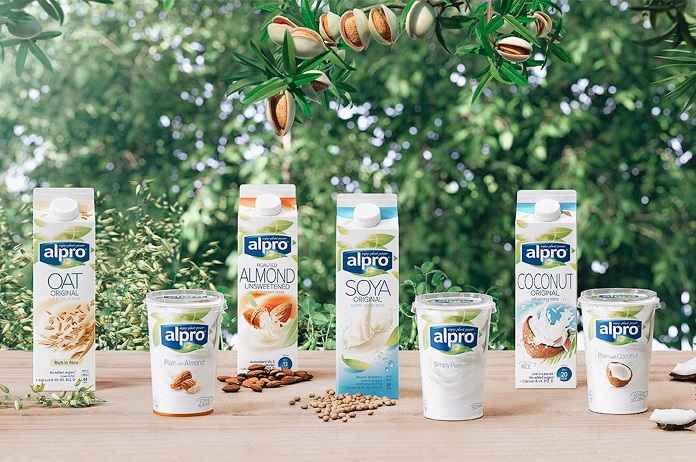 Some plant-based milks are fortified with vitamin D. | Aplro

Fortified vegan milks—like coconut, almond, and soy—can contain high levels of vitamin D. Check the label of your regular non-dairy milk to be sure it contains enough vitamin D. If not, you can switch to a new one! Alpro milks contain a number of vitamins and minerals, including D and B12. They also contain calcium, vitamin E, and B2.

Oatly’s vegan oat milk in original, chilled, barista, and chocolate flavors are also fortified with vitamin D. Ripple is another vegan milk brand that has products fortified with substantial amounts of vitamin D. The brand notes that each serving of Ripple has eight grams of protein. It also carried 50 percent more calcium than two percent dairy milk, more vitamin D and iron, and contains only half the sugar of two percent dairy milk. 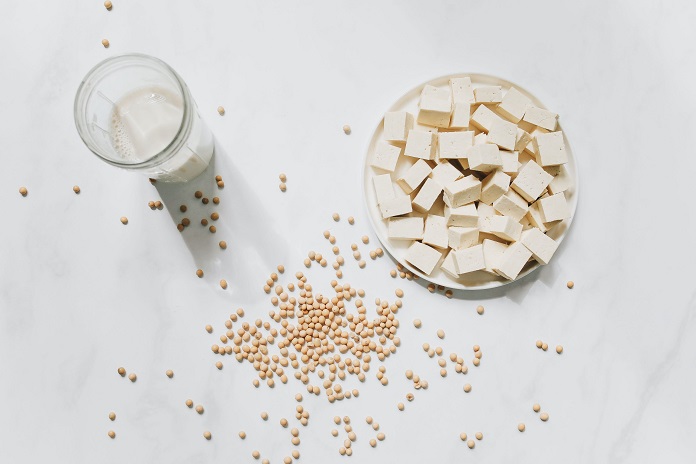 Tofu is a versatile source of vitamin D. | Polina Tankilevitch/Pexels

Tofu is a good source of a number of vitamins and minerals, including vitamin D. The good thing about tofu is its versatility. You can use it in a variety of dishes at different times of the day. Consider scrambling it and having it on toast for breakfast. Or you could make a tofu Thai green curry for lunch or a breaded tofu burger for dinner. 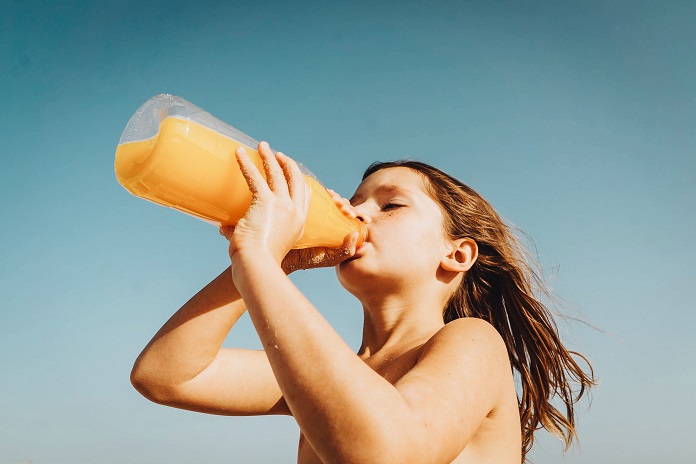 Some orange juice is fortified with vitamin D. | Piotr Chrobot/Unsplash

Drinking fortified orange juice can help keep your vitamin D levels up. One study—conducted at the Boston University School of Medicine—discovered that participants who took supplements and those who drunk orange juice fortified with 1,000 IU of vitamin D had the same risen levels of the vitamin by the end of the experiment. 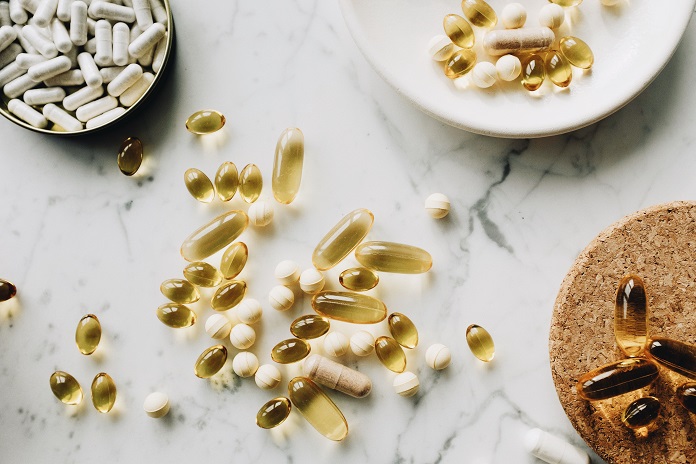 If you’re struggling to get enough vitamin D, consider taking a supplement. Fortunately, there are many vegan supplements on the market. Mykind Organics, founded by actor Alicia Silverstone, offers a plant-based vitamin D supplement in chewy, tablet, and spray varieties.

The brands Country Life and Future Kind also offer vegan vitamin D supplements. The company’s products even come in recycled packaging. According to co-founder Shaun Cunningham, “Future Kind is the first supplement to offer just the essentials, in the form and dose that’s ideal for vegans. It takes the guesswork out of ensuring that you’re getting what you need.”

Getting enough sunlight is also essential for keeping your vitamin D levels up. “When your skin is exposed to Ultraviolet B (UVB) rays your skin absorbs it and with precursors in the skin it makes vitamin D3, this is the reason why animal sources of the vitamin provide the D3 version,” said Barbour.

However, too much sunlight can be dangerous for your skin and your overall health. This can put you at risk of sunstroke, exhaustion, or even skin cancer. So it is important to regulate the amount of exposure you have. Barbour explained, “You must practice safe and limited sun exposure while the sun is high in the sky, not when your shadow is longer/taller than you are. I suggest noon, no matter where you are this should be fine. Keep in mind, do not get sunburns or excessive exposure, this can be counterproductive.”

“Eat UV exposed mushrooms, enough sunlight, and if you really think you need more or live in a dark/cold place you can supplement vitamin D or buy fortified foods.“