For 20 years, Brian Kavanaugh was a butcher. But after his vegan wife showed him “Earthlings,” a 2005 documentary narrated by Joaquin Phoenix, he felt conflicted.

The Independent reports that he eventually quit his job at Morrison’s meat counter to work at a small pizza chain. “Suddenly the idea of putting something dead inside my body didn’t feel right,” he told the newspaper.

When the pizza chain shut down, Kavanaugh was introduced to Hilary Mason and Alberto Casotto, co-founders of the Scotland-based plant-based food brand, Sgaia Vegan Meats. Now a vegan, he has been working for the company since 2017.

“It’s been interesting to use my knowledge for something different,” Kavanaugh said. “The meat all gets sliced the same way in a meat slicer, which I have been using for more than a decade, and after all that practice with sausages, I am pretty fast with a knife.”

A love for making food inspired co-founders Masin and Casotto to begin making vegan meat in their Wales kitchen in 2013. They soon started selling their wares at festivals, which led to interest from local businesses. At the time, Masin was still in college. 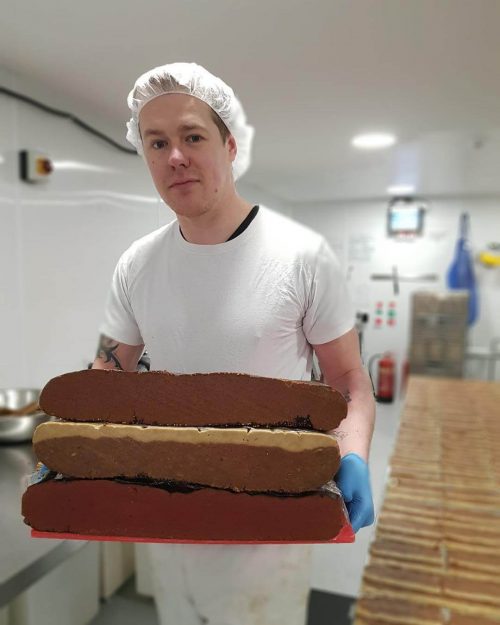 After moving to Glasgow and receiving a local business grant, Sgaia Vegan Meats has been able to grow. The company now makes meatless “Mheats” such as burgers, lorne sausages, streaky rashers, steak, and charcuterie and vegan cheese. The products have a taste and texture similar to real meat – something that Masin believes is important.

“Many people who go vegan are not doing so because they do not enjoy the flavours and textures of food, but because they are driven by ethics/morals,” she told LIVEKINDLY. “Even if you are a health focused plant-based individual, vegan meat alternatives that are accurate and authentic tasting are a great ingredient to use in home cooking.”

While “realistic” in appearance, Sgaia’s meats have their own unique characteristics. “Vegan doesn’t mean fake, and our products are meant to satisfy the need for something other than an imitation, something that is self validated by its unique quality, flavour, and texture profile,” Masin said.

Sgaia’s products, which are made from ingredients like wheat and soy protein, are stocked in major and independent grocery stores throughout Scotland and the UK, such as Whole Foods Market and Greenbay Supermarket. It’s also served in select restaurants.

Masin expressed some of the struggles of having a small business: “We’ve been contacted by the major retailers but because we’re so small it’s difficult for them to work with us. When the quantity is there, we will look at it.”

The interest from major retailers speaks to the rising interest in plant-based food across the UK. Last month, a record-breaking 250,000 went vegan for Veganuary, a month-long commitment where participants give up animal products.

According to the Guardian, there is an estimated 22 million “flexitarians” – people who try to eat less meat – in the UK. Across the nation, small businesses like Sgaia Vegan Meats as well as plant-based options in major supermarkets and restaurant chains are on the rise.