Thanks to LEGO, food technology companies from around the world may bring mass-produced cell-based meat products to market in the near future. Lab-grown meat products are in their early stages at the moment, but huge strides are being taken by scientists every day.

The Institute of Chemical Technology in India even believes that clean meat could be feeding the nation as soon as 2025.

At the moment, one of the key issues facing the industry is the concept of structure. According to Food and Wine, when animal cells grow to form meat, they do it without organization, resulting in a mince-like product. But researchers from Penn State and the University of Alabama are on a mission to overcome this problem. To find new ways to give the cells more structural support with starch fibers, they’re simply using LEGO bricks.

The publication notes, “the researchers wanted to turn starch fibers into that scaffold, and in building the resulting electrospinning device to make that happen, they ended up digging into the toy box.” 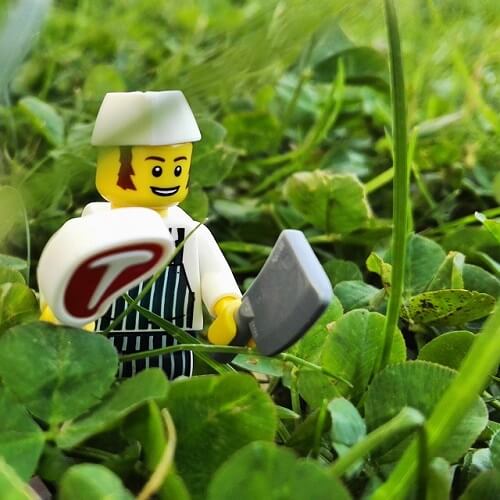 According to Gregory Ziegler, professor and director of graduate studies at the Department of Food Science at Penn State, the scientists opted for LEGO bricks because they are made from plastic. “We’re going to have water and ethanol in the [electrospinning device] and we don’t want the device to be conductive,” he explained in a statement.

Using starch fibers as “scaffolding” to create more complex structures of meat like steak could be a breakthrough for the industry. “A lot of scaffoldings that have been put out there for biomedical applications have synthetic plastic fibers,” said Ziegler. “Who wants to eat plastic, right? Even if it’s biodegradable, people don’t want plastic in their meat.”

He continued, “here we have starch, and it just comes from corn. The idea is we could make a nice edible clean scaffold for our clean meat.”

Could Cell-Based Meat Change the Future of Food?

Using animal agriculture to create meat is unsustainable, according to a growing body of research. The United Nations reported last year that there is no way to currently achieve the Paris Climate Objectives without a huge reduction in animal agriculture.

Clean meat could present an answer, and a number of consumers are willing to give it a go. According to a study by the Good Food Institute last August, nearly 70 percent of Americans are open to the idea of eating lab-grown meat over traditional farmed meat.